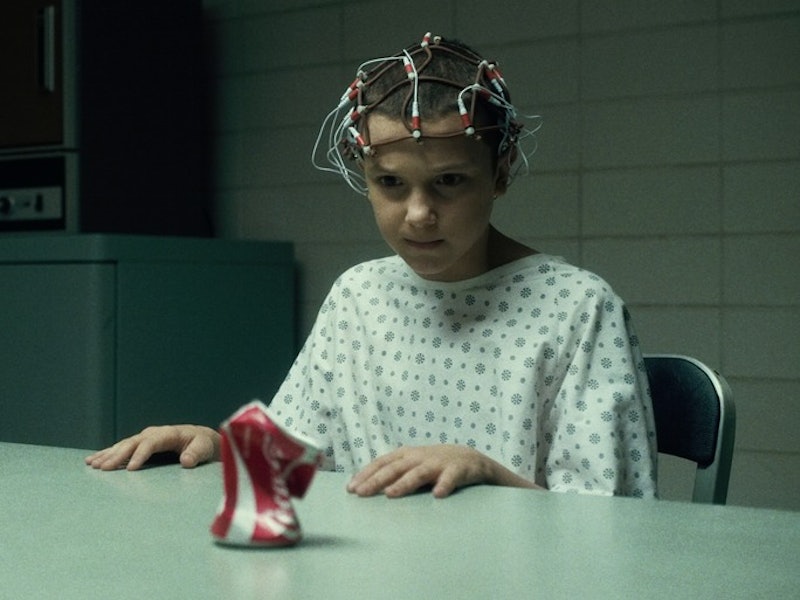 In case you hadn't heard, Stranger Things is the must-see television show of the summer. So much so, that if you haven't already, I'm gonna need you to stop reading this article for a minute, marathon the series stat, then return to read the rest. If you have already marathoned the series though — perhaps even in one day (like I did) — you're probably chomping at the bit for Stranger Things Season 2. Unfortunately, it seems like it might a while until that comes out — so what's a fan to do? Though we might have a lengthy wait ahead of us, that doesn't mean that we, the avid fans, can't do anything in the meantime to keep the vibes alive. We can watch films that evoke the atmosphere of the show, we can recreate the fashion or the incredible set pieces, and, best of all, we can search the depths of the fandom for some of the best theories on what could actually happen on Season 2. The Season 1 finale left us with so many questions, fears, and curiosities, it's hard to imagine a scenario where another season simply doesn't exist. So, what are some of the best Stranger Things fan theories? What are some of the most realistic?

I decided to pull a Sheriff Hopper and do some investigating into the best Stranger Things fan theories out there. There are some truly fun ones, wild ones and weird ones being thrown out into the world that are worth taking a look at. Here are some of my favorites:

This theory has actually echoed my thoughts precisely. Hopper is bereft at the apparent loss of his daughter some years earlier; I abide by the rule that if you do not see a body in a casket in television, there is always the chance that the character in question could come back to life. The last we see of Hopper, he is placing party leftovers and Eggos into a box in the woods. How does he know Eleven loves Eggos? Maybe because he gave them to her as a little girl.

2. What If This Is All In Eleven's Mind?

What if the Upside Down was all in Eleven's mind? What if her thoughts are so powerful that she has created the town of Hawkins as a coping strategy, or a way for her to cultivate her abilities? Are we dealing with a Fight Club or St. Elsewhere scenario, where Eleven is the true protagonist and simply trying to create a world that makes sense for her otherworldly abilities?

3. Will Is Going To Transform To The Demogorgon

There may be more trouble in store for Will in Season 2. Coughing up that slug in the last moments of the Season 1 finale was definitely not a good sign, and seeing reality as if he was still in the Upside Down was even worse. There's no doubt that Will was a totally transformed person after his experiences in the Upside Down. Perhaps when he was revived by his mom and Hopper, the Demogorgon had already begun the process of cultivating his body to expand its reach and power — and because the process was stopped midway, Will's carried something back with him that will continue to grow and manifest inside of him.

I'm so curious to see if those Eggos that Hopper left in the woods are still there in the Season 2 premiere. While the Duffer Brothers have confirmed that Eleven is alive, the definition of "alive" is a bit murky. If Eleven and the Demogorgon are somehow connected, then perhaps Eleven will take another form in Season 2?

5. Hopper Will Stop At Nothing To See The Upside Down Again

Hopper is ready to head back into the Upside Down. How do we know this? Not only does it appear that he's been recruited by the Hawkins Lab group, he seems consistently drawn towards the portals into the Upside Down. This could tie back to the possibility that Hopper and Eleven are related and why Hopper is compelled to explore this other dimension. Is he simply a father instinctually searching for answers? Or is there something more sinister drawing him in?

This is my own personal observation but surely Mr. Clarke, the A/V Club teacher, has been sucked into the machination of Hawkins Lab, right? Sure, he's a good-hearted fellow, but he got "recruited" early on in the series, leaving me to wonder if officials from the lab will be calling on him in Season 2.

7. The "Barb Vs. Will" Conundrum Needs Answers

How did Will make it out of the Upside Down alive while Barb (everyone take a moment of silence for Barb, please) met an untimely end? Barb ignited a fandom all her own, so why did she get the short end of the stick, unlike Will? There is a chance that Will's youth equals a certain kind of malleability that the Demogorgon liked, hence he was kept alive. Maybe Barb's survival skills weren't up to par, unlike Will, who used his D&D skills to outwit the Demogorgon for so long. We'll definitely need more insight as to why Will survived and how the Demogorgon operates in Season 2.

8. What Is Actually Going On In Hawkins Lab?

But what is actually going on in this lab? How has nobody in Hawkins mentioned or noticed this lab before? Is it so well-hidden and out of the way as to not incur suspicion? Regardless of being noticeable to the Hawkins townspeople, the Hawkins Lab is at the center of some major government conspiracies that need to be unpacked next season. There have been top secret projects going on since, ostensibly, the '60s with creepy Dr. Brenner helming the experiments. We need to know why Eleven is the lab's greatest achievement ASAP.

9. Will The Upside Down & The Real Town Of Hawkins Merge?

One exciting theory posits that the two different realities (the Upside Down and Hawkins) might begin crossing over more in Season 2. With Will's sluggish bathroom sequence at the end of the final episode also showing a momentary crossover between worlds, there is a chance of worlds colliding in Season 2.

10. Don't Forget About Those Science Clues

The science of Stranger Things is wild. There are so many clues from Stranger Things that tie back to science that it's difficult to ignore them. The Duffer Brothers have poured so many '80s films references into Stranger Things that it's easy to overlook the other low-key clues, like when Mr. Clarke explains the possible existence of other worlds through the metaphor of the flea and the acrobat. It's worth watching the series again to see if you can glean any clues from the more scientific dialogue being lobbed around because it could help unlock what to expect in Season 2.

I'm not saying it will immediately, because we already know Season 2 will continue Will's story. But, what if after that, the Duffer Brothers decides to follow in the footsteps of American Horror Story and True Detective by making their own masterpiece into an anthology series? There's no signs that, if a Season 3 happened, it wouldn't head in a drastically different direction.

All this list proves to me is that I need to re-binge Stranger Things for the umpteenth time. What other theories exist that need to be explored in Season 2? Something tells me this list is only the tip of the iceberg.

More like this
'Stranger Things' Season 4 Volume 2 Trailer Teases New Episodes Coming July 1
By Grace Wehniainen and Gabrielle Bondi
Who Could Die In The Stranger Things Season 4 Finale?
By Kadin Burnett
'Stranger Things' Star Joe Keery Ditches The Upside-Down With New Single "Change"
By Radhika Menon
The ‘Squid Game’ Season 2 Renewal Teases A Creepy New Figure & A Return
By Brian Anthony Hernandez and Bustle Editors
Get Even More From Bustle — Sign Up For The Newsletter