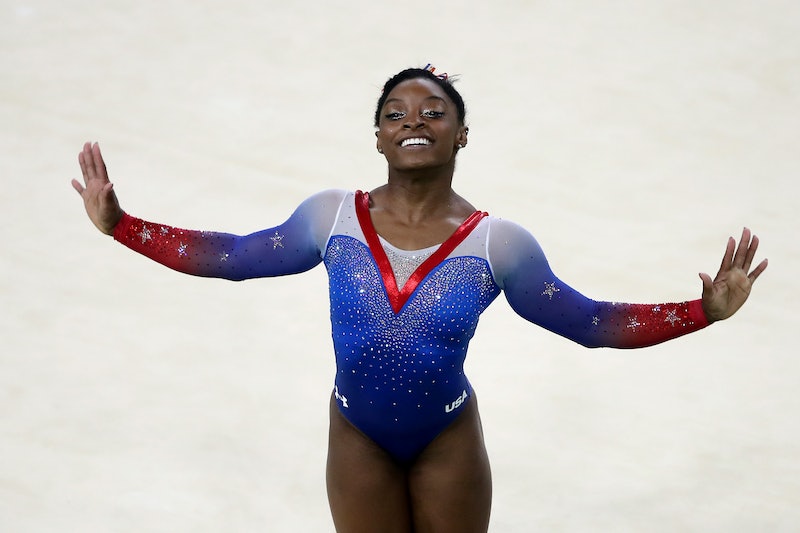 Right from the get go, I was irked by the assumption that Simone Biles would take away five gold medals from the Olympics. Not because I thought she couldn't do it, but because I thought it was unfair to put that sort of expectation on someone. Yes, even someone that good. To make matters more frustrating, as the competitions went on, commentators and spectators alike started to sound a lot like stage parents, projecting their own hopes and dreams of continued flawlessness onto the teen. They set her up for a fall and, unfortunately, fall she did. Though, as Biles' tweets about her bronze medal prove, she may not be purely golden, but she is personally just fine with that.

After all, it's not just her wins, though they are endlessly impressive, but her winning spirit and exemplary sportsmanship that makes Biles a true Olympic champion. In fact, I should probably add "a supremely sassy but still classy social media presence" to that winning combination. Clearly aware of the unrealistic expectations that she didn't exactly meet, Biles tweeted something that put absolutely everything said about her, both good and bad, into perspective. She wrote, "1st olympics— 4th olympic medal (3 gold & 1 bronze) y'all aight out there? bc I'm more than happy! Floor finals tomorrow, so excited."

That wasn't the only wisdom Biles imparted to her followers and scrutinizers. The ever graceful and poised gymnast took to Snapchat to show off her bronze, because she is proud of it:

The Olympian makes a great point. In a way, that bronze is almost sweeter than all of her gold medals combined, because of how she achieved it. But the real thing to marvel at in this situation is how Biles carries herself in times of adversity. It would have been easy, and even expected, for her to wallow over the lost chance of that five gold medal goal. But she didn't. "Sore loser" isn't in her vocabulary. Mainly because nothing was lost. She won a medal, it just wasn't gold this time. Instead, she used her platform to comfort those who were more upset about the balance beam misstep than she was.

It's more of the same behavior that was seen earlier on in the competition, when Biles had teammate and silver medalist Aly Raisman, share in her gold medal moment after winning the all-around competition. Biles is an Olympic champion because she proves that whether things go right for her or if they don't quite go her way, she maintains the same unparalleled integrity. Biles has officially made winning a bronze medal as significant as winning the gold and she elevated its status by simply rising above.