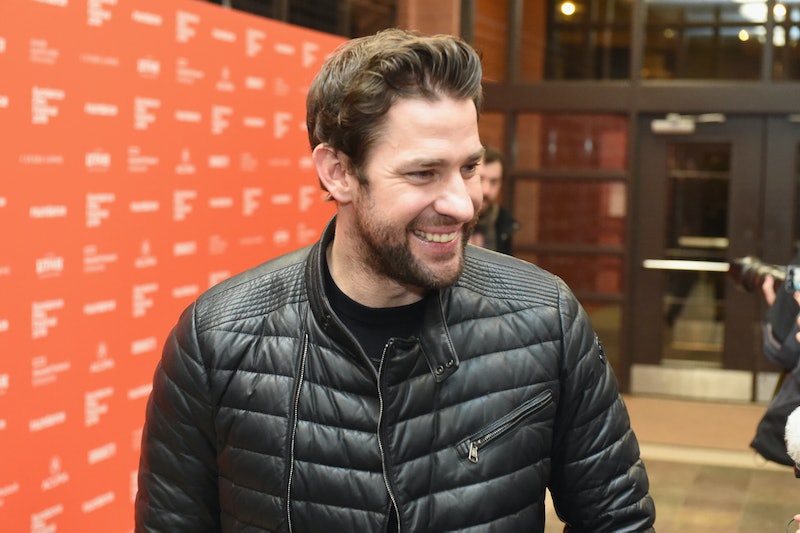 Amazon Studios has greenlit 10 episodes of Krasinski's new Jack Ryan show right away, meaning that they're not planning on testing a pilot first. This not only shows Amazon's commitment to making more exciting original content than ever, but it also proves that there are other people in the world that understand just how incredible Jim Halpert — I mean John Krasinski — is. Although there's no release date as yet, Tom Clancy's Jack Ryan, produced by Paramount TV and Skydance, sounds as though it will work perfectly as a series, since there will be plenty of time for character development and to explore a much bigger timeframe in the life of a CIA Analyst. Although I love Chris Pine, Krasinski is going to be the best Jack Ryan yet, and Amazon clearly agrees.

Of the decision to greenlight 10 episodes of the new show, Amazon Studios's Roy Price said,

Our customers will enjoy a compelling adaptation of the action-packed spy thriller book series, further raising the bar for the quality level of storytelling that has made Prime Video a leading destination for content.

Jack Ryan will certainly be a welcome addition to Amazon's roster of shows, and is evidence that, as a streaming service, they're not afraid to take risks by leaping into the action genre. And, even though Emily Blunt's husband is most famous for his adorable role on The Office, he's more than ready for an action role in my opinion.

Krasinski is a great choice to play Jack Ryan, because he's an unexpected choice. It would've been easy to typecast the actor in lovable and funny roles akin to his part in The Office. As Jim Halpert, Krasinski won the hearts of pretty much everyone worldwide as Pam's totally perfect partner, while also playing some of the most legendary pranks on his fellow office worker (remember when he put Dwight's possessions in the vending machine?). The fact that the role of Jack Ryan is basically the polar opposite of Jim Halpert makes his casting all the more exciting. The public might not have thought of the actor in a full-on action role before, but, now that it's official, there's no doubt in my mind that he will step up to the challenge, and prove just how versatile he is.

Recently, the actor starred in 2016's 13 Hours: The Secret Soldiers of Benghazi, as one of the members of a security team defending the American diplomatic compound following terrorist attacks. The movie was a departure for the actor, and perhaps a stepping stone to his latest role in the Jack Ryan reboot. It's always a risk for an actor to move into a brand new genre, but Krasinski's immense like-ability will be just as evident in the Amazon show as it always is, giving viewers a reason to marathon it. Since the show's ordered to series without a pilot, a lot of faith has been put in Krasinski's ability to be an action star, despite previously starring in lots of romantic comedies such as It's Complicated and Something Borrowed. The actor is clearly ready to make the leap, and I can't wait to see him headline the thriller.

Clearly, this is exciting development in Krasinski's career, particularly since he seems to be following in the footsteps of his wife Emily Blunt, who often stars in action movies like Edge Of Tomorrow and Looper. Amazon Prime viewers are definitely in for a treat when Tom Clancy's Jack Ryan eventually airs. Let's just hope it's soon.