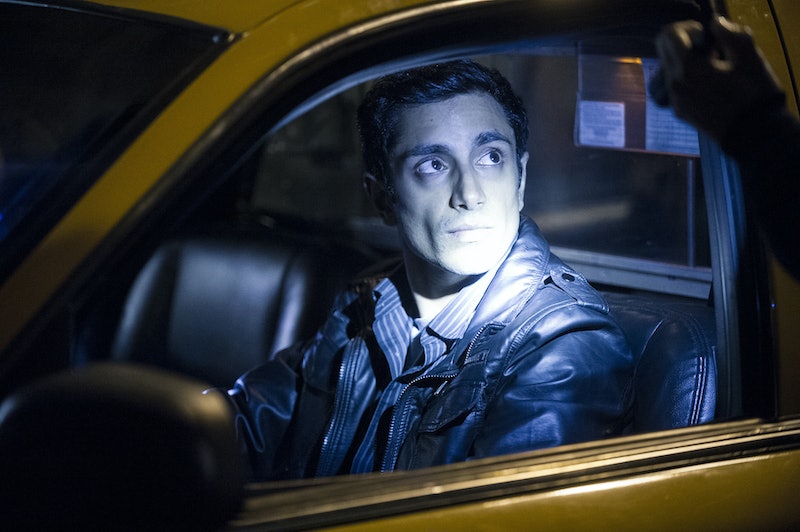 Who killed Andrea Cornish? That is the ultimate question HBO's The Night Of is asking, but it seems there isn't a cut and dried way to answer it. The eight-episode miniseries, which focuses on a New York City college student named Naz who finds himself the lead suspect in the murder of a young woman he meets for a night of sex, drugs, and a game of hand stabbing, is coming to a close. And there seem to be many theories on who exactly the murderer on The Night Of is.

Everyone seems to be coming up with their own theories. With only two episodes to go before the August 28 finale, Indiewire is even making some predictions about what Andrea's cat knows about the murder that actually aren't that far-fetched. While Andrea's killer isn't a cat, what is clear as of now is that none of the information the show's given about the case should go unnoticed. At this point, everyone's a suspect. To take some advice from The X-Files' Fox Mulder: Trust no one.

That's the thing about this show, which has become summer's must-see drama: You really don't know what anyone's intentions are. All of the coincidences or signs make you question everything you think you know, and look for things you don't. For instance, if Naz murdered Andrea, why wasn't he covered in blood? Exactly. That's why it's worth taking a look at all 12 of these theories. Who knows, you may even come up with you own idea before you're even done reading.

1. Andrea's Stepfather Is Responsible For Her Murder

In Episode 6, viewers meet Andrea's very helpful accountant, Ray Halle, who says that Andrea's stepdad, Don Taylor, is definitely a possible suspect. Ray paints him as a gold digger who was making just $30,000 a year as a trainer before marrying Andrea's mom. After his wife's death, though, Don was looking to take half of her assets — but Andrea said no. Well, to be exact, according to Ray, Andrea said Don could have her mother's fortune "over my dead body." It's an interesting choice of words, given that since she has died, Don will get everything she owned.

2. The Accountant Had Something To Gain In Andrea's Death

Yahoo! suggested a theory that Ray was in on the murder with Don. According to their theory, the two planned to kill Andrea and take the money, but Ray realized that if he implicated Don in the murder by hinting to Naz's lawyers about his motive, then he could take in even more cash. Definitely sounds plausible, since if you are the kind of person who can set up a murder, you're probably the kind of person to point fingers for that same murder so that you don't get caught. He was just a little too accommodating. It's also interesting that he was at Andrea's funeral. John Stone even catches a heated exchange between Andrea's stepdad him in the cemetery.

3. The Guy Who Harassed Naz And Andrea That Night Came Back To Kill Her

Trevor Williams happened to be walking by Andrea's apartment with a friend when she was with Naz. But he didn't just walk on by; he shouted at the couple, made offensive comments about Naz, and then went on his way. Later, Trevor returned to the scene of the murder, telling the police he had seen Naz with Andrea. When questioned later by the police, though, he said he was alone — despite the fact that he wasn't. Why would he lie about that one detail? He also seemed especially angry about being questioned.

4. Duane Reade Was The One Who Did It

Reade runs off when Stone goes to ask him a few questions, leaving us with a cliffhanger for Episode 5 that still hasn't been addressed. As of right now, this guy has disappeared. But what hasn't disappeared is our knowledge of Duane's criminal record, which includes break-ins and the fact that he is known for his use of knives. Fans also can't forget that stare that he gives Naz before they head into Andrea's house. It is quite a creepy stare, that's for sure. But is it a murderous one? That's still unclear.

5. Freddy Was The One Who Called For Andrea's Murder

Could Freddy, the inmate who is running things inside Riker's, actually be the puppet master behind the whole thing? As Refinery29 hypothesized, Freddy may have some beef with people outside the prison. Namely, Andrea could have owed him money. Perhaps he sent Reade out to do the job. This could explain why he's taken such a liking to Naz. Sure, he may appreciate Naz's smarts, but maybe he also feels a little guilty for what he's done — or worse, wants to keep his enemies close.

One Redditor thinks Freddy could even be in cahoots with Andrea's stepdad. It's already been mentioned that Freddy is from Queens, as is Don. Since Don may have been looking for his share of Andrea's mom's wealth, he could have set up this murder by reaching out to people who could make that happen. Freddy definitely seems like that kind of guy, considering how many connections he has outside the prison. Who could he have called on to do the job? Trevor and his friend, who may have actually been casing the joint when they saw Andrea heading into her house with Naz.

6. The Drug Dealer Did It

This seems like a bit of a red herring. A little too Law & Order, maybe. But this drug dealer who John Stone goes to talk to runs off looking for legal counsel. He is, however, the one who sold Andrea the drugs, so as Hollywood.com points out, Stone's explanation of this drug dealer makes sense. Andrea owes him money, and he in turn owes money to his supplier. Would he go as far as murdering someone to get his money? Stone would like to think so. But a question I still have is: Who is his supplier? That's a possible lead the show has yet to dive into.

7. The Creepy Hearse Driver Did It

As fans of the show learned in Episode 6, Mr. Day — the creepy hearse driver Naz and Andrea run into at a gas station — does not think highly of women. Or as he tells Chandra, women "like Andrea." When the young lawyer goes to confront him, he says in no uncertain terms that Andrea got what was coming to her. Was he the one who did it? He certainly seems angry enough to take a life, but I'm wondering if his overall evilness is a little too obvious. Could this just be another case of misdirection?

Andrea's neighbor, Cavale, is the one who called the police on Naz for breaking into her house at 4 a.m. But why was he up at that ungodly hour staring at his young female neighbor's place? He called the cops to tell them he heard a break-in, but what if he already had broken in? Or just walked in, since it's already been made clear that Andrea did not fully close her back door when letting the cat out?

Cavale specifically wanted to talk to Detective Box about the person he saw, and he made some quick judgments about Naz, even asking the cops if he thought he was the kind of guy who would flee the country. Sure, this could be casual racism, but what if it's just him trying to place the blame for the hideous murder on someone else? As Decider pointed out, no one has questioned his relationship to Andrea at this point in the series, despite him being the prosecution's key witness.

9. The Mysterious Person Who The Cat Sees

You knew the cat would find its way into one of these theories, right? When Andrea lets the cat out of her house, it seems to spot something in the shadows beyond the gate of the apartment. Redditors seem to think it was someone familiar, someone the cat recognized and wasn't afraid of. Could this person be from Andrea's past, which we already know was filled with drugs and a stint in rehab? She also entered Naz's cab telling him that she couldn't "be alone tonight." Could this be the person she was so worried about running into? Or does this mystery person know something that could be helpful to the case? As of now, this has gone ignored in the show, but it seems like it could be a telling sign. Was Andrea not the real owner of this cat? Could that be a clue to who really killed her that night? This seems like a lead that still needs to be explored. Let's get John Stone (and the cat) on the case!

10. That Motorcyclist Is The Murderer

The look this unknown motorcyclist gave Naz is definitely interesting. Is this motorcyclist also fleeing the scene of a crime they just committed? Or do they just happen to see that bloody knife sitting on Naz's dash? Maybe the look was nothing. But Reddit user sage_1994 pointed out that Andrea had a motorcycle tag on her license, meaning she may know a motorcycle rider or two. Basically, don't sleep on that stare. It could actually be meaningful.

With all those stab wounds, it's hard to believe that Andrea could have killed herself. But Refinery29 reported a theory by Twitter user Will Daily which questions if the woman who was killed was actually Andrea. Basically, according to the theory, she faked her death to get away from whatever was plaguing her that night. This theory claims that Andrea could have given Naz drugs like ketamine — which was bound to knock him out — so that she could frame him for the murder of another girl who looked like her. That seems a little intense, but Andrea's stepdad does initially say that the woman in the photos that he's shown at the morgue was not her, only to change his mind after they tell him he's going to have to see the body to confirm that it isn't her. What if it really wasn't?

12. Sorry, But Naz Actually Did It

For some, this may be sad to admit, but there are a lot of signs that do point to Naz. While he can't remember how he got to the kitchen, the last few episodes have seen him having brief flashbacks as he tries to remember what happened that night. Could he have done it but forgotten? He was on a lot of drugs that night which could have played with his memory. Knowing now that Naz does have the capacity for violence — he threw another kid down the stairs and admitted he felt no remorse — it could be possible that the mix of drugs and pent-up aggression could have led to something terrible that night.

Like Detective Box, I'm not so sure that Naz was the one who committed the murder, since not everything lines up. Now, with these theories, there are some questionable points, but it's clear that as of right now, knowing what we know, it is pretty hard to say without any doubt that Naz was the one who murdered Andrea. It seems fans will have to keep watching to see if that changes.