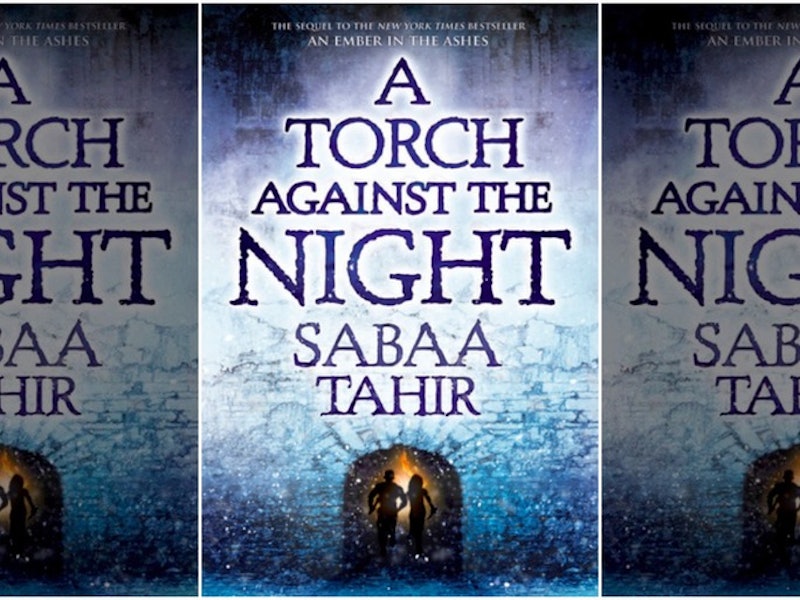 A Tuesday announcement revealed that Sabaa Tahir's An Ember in the Ashes series will get two more books, and no, this is NOT a drill. The series' first installment has already earned the author a movie deal with Paramount Pictures, and its sequel, A Torch against the Night, is slated for release on Aug. 30. The third and fourth An Ember in the Ashes novels will be published beginning in 2018.

An Ember in the Ashes centers on a young woman named Laia, who lives in the Martial Empire with her brother, Darin, and their grandparents. After her brother is arrested and their grandparents are killed, Laia strikes a bargain with a group of rebels to become a slave and a spy at Blackcliff Military Academy, in exchange for Darin's safe return. While undercover, Laia meets Elias: one of the academy's elite soldiers, who detests violence, and wants to change the Martial Empire from the inside.

In March 2015, Tahir told Entertainment Weekly that her childhood in the Mojave Desert and her work at The Washington Post influenced the development of An Ember in the Ashes. From EW:

I grew up in the Mojave Desert, and I always felt like an outcast because I did not fit in because of the color of my skin and where my family was from. ... I always knew that if I did write, I wanted to write something in which the characters felt as voiceless and powerless as I did when I was a kid. But unlike me, they would actually fight back and learn how to speak and to make their place in the world.

My work at the Post [sic] helped me center the book. I read these stories about child soldiers and midnight raids and extrajudicial jailings, and that inspired a lot of the setting and the scenes in the book.

An Ember in the Ashes garnered a seven-figure movie deal months before its release. At the time, it was a standalone novel. Today, it's clear that Emberlings don't have to worry about Tahir's fire dying out any time soon.

The second An Ember in the Ashes book, A Torch against the Night is available for pre-order now. Pick it up on Aug. 30 from your favorite retailer, and read an exclusive excerpt now.