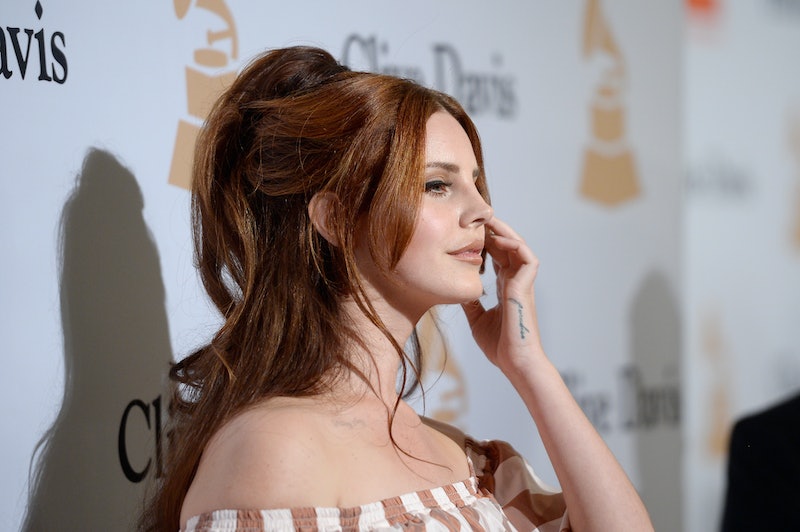 If you ever wondered if a certain melancholy auburn chanteuse is partial to emojis, you're about to be delightfully amused. A previously unreleased Lana Del Rey track, "BBM Baby" leaked on the internet and is now doing an extensive tour of Tumblr. Apparently this song was co-written and produced with Penguin Prison back in 2011, the tune is already a stand-out piece because of it's strangely up-beat synth-pop sound. But "BBM Baby" may be difficult to understand... especially for those of you who don't know what "BlackBerry Messenger" was.

See, there is a hilarious throwback quality to this track, one that differs from Del Rey's Priscilla Presley beehive: only five years after this song's recording, BlackBerry Messengers are a quasi-antiquated piece of technology. I'll be honest with you, I don't like giving my digits out to anyone who doesn't use iMessage (blue bubbles or die, baby). Still, take away the BBM, and this is a pretty classic Del Rey story with a relatable, modern tale of a sext message romance. It's flirty, it's dangerous, it's even refreshingly youthful compared to the more heavy-handed siren songs that exist post Born To Die. And don't worry, we have the receipts to prove it.

Let's take a gander at the first verse of "BBM Baby" which talks about how Del Rey is typing sweet nothings on her keyboard to some mystery man:

I be BBM'in youTelling youAll the things I'm gonna do to youWhen you get home babyMakin' love then yelling oohNothin' I would rather doThen flirt and talkin' dirty, youLove me, hate me

Pretty classic set-up, right? Del Rey is using her long talons to message a guy she's been seeing. Initially you start to think this may be someone she's been involved with for a while, her long-time daddy coming home from an exhausting day of work... or an exhausting day with his wife. Hey, I'm not judging, I just listen to a lot of Del Rey, and that's the usual narrative. Whatever the case may be, they are totally boning, there's no doubt about that.

Of course, there seems to be some sort of catch involved: Del Rey talks about how her squeeze is "treatin' me right, treatin' me rough." The "rough" part warrants a bit of an eye raise, but she insists twice that she likes it. And it would definitely seem that this exquisite torture isn't a one-sided thing, and Del Rey asserts she's been driving this guy crazy, too.

And I know that I’m making you nutsMiddle of the night and when I’m waking upI don’t know why, but you can’t get enoughYou like it, you like it

Huh. So this may not be a serious relationship after all. If Del Rey is sending using her exquisite french manicured hands to send out "u up?" texts at 2 a.m., it means she's certainly sleeping alone. Hell, if she's sending these texts first thing in the morning, then the guy is bailing before breakfast. Rude.

Further evidence can be seen in the chorus when Del Rey begs her sext-buddy to "Be my BBM baby." Right now their relationship is regulated to the "middle of the night" with Del Rey "waking up to ride" (hint: probably not a car). This feels more and more like an adolescent tryst with starry-eyed hopes to make it into something real. As far as I can tell, this guy is her BBM Baby, but when she asks "When will you be mine?" it seems like she's looking for a BBM Boyfriend. Or, you know, an actual boyfriend.

There are amusing nods to how texting has changed the relationship game here, woven seamlessly into the song. When Del Rey swoons, “You’re typing this poetical/Red roses in your message oh," she probably just means that he was really eloquent about asking for a tit pic. But the "red roses in your message" makes a modern listener think of using emojis as a colorful substitute for tangible affections, true poetic expressions that have been lost with hand-written love letters. The BBMs further mute genuine, traditional romance with Del Rey's excitement about how he, "signs XO, hugs, hey/I know it’s true love cause my heart goes yay." Girl, probably not.

In the middle of the nightHe writes that he’s outsideI left my window open babyYou can come insideCall me when you get hereI’ll be ready boyCause I heart you, you’re the one that I adore

So there you have it: "BBM Baby" is the classic story of technology facilitating clandestine relations, with at least one party yearning for a little bit more. It's also, from my perspective, a celebration of a younger Del Rey, one who still thrilled in getting her heart broken, but was satiated by texting some loser for a toss in the sheets. Perhaps that's a bit of a generous analysis for a simple concept, but what can I say? While the era of Blackberry Messenger is over, text message inspired hook-ups are still going strong.