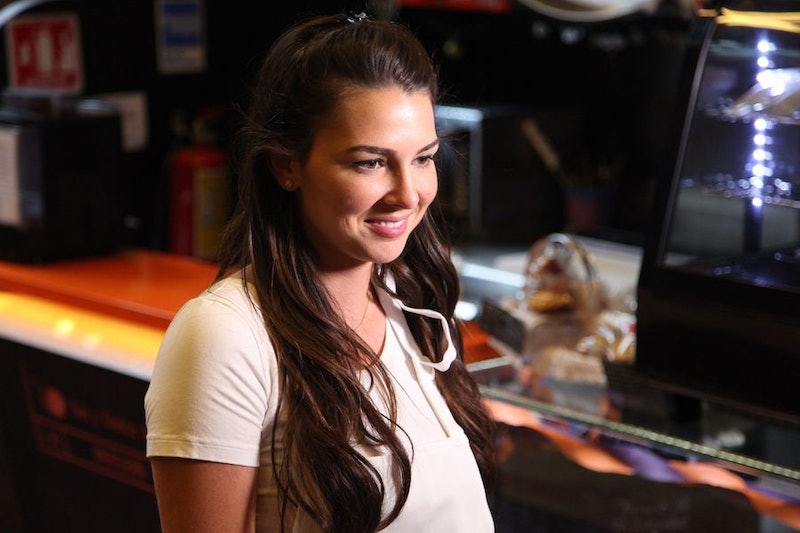 Bachelor in Paradise Season 3 is in full swing, and you know what that means. We've got love triangles up the wazoo, new contestants arriving each day to put established couples in jeopardy, and Jorge remains the funniest person in Puerto Vallarta. One of the biggest stories in the first part of Season 3 has been the love triangle between Nick, Amanda, and Josh — but all that is about to change when Jen arrives in Paradise and sweeps Nick off his feet. So, now comes the big question: Are Jen and Nick still together after Bachelor in Paradise?

Well, let's back up a bit to talk about Nick and Amanda (and Leah) for a second. In week one, Nick was asked out by Leah with the date card she received when she arrived. Then, he turned around and went on a date with Amanda, who he ended up giving his rose to during the first rose ceremony. The love triangle between him, Amanda, and Josh first began when Josh arrived during the second week and took Amanda on a date. OK, here's where it gets interesting: Amanda recently wrote about her side of the love triangle story on her blog, saying her date with Nick wasn't as good as the show made it out to be and she claimed that he allegedly told her on multiple occasions he wanted to meet Jen on Bachelor in Paradise.

During a recent appearance on AfterBuzz TV, Nick addressed Amanda's blog saying it was "mostly true," though he clarified that he didn't go on Bachelor in Paradise for the sole purpose of meeting Jen. Rather, he said he had told Amanda that he was interested in meeting Jen if she were to arrive in Puerto Vallarta.

So, we know that Nick had his eye on Jen even before the cameras in Paradise started rolling, and what I can gather from the promos for Bachelor in Paradise, they're going to have a pretty serious relationship. Let's look at the facts: The original trailer for Season 3 features a shot of Nick looking at engagement rings. There's a snippet from an interview in which he says, “I know this is the person, I’m in love.” Plus, there are some Jen-centric moments, including one that looks like Nick and Jen head into a Fantasy Suite.

The promo for episode 5 also features plenty of clips from Jen and Nick's date, which gets broken up briefly by a beach full of crabs. (Side note: Are we entirely sure those crabs weren't specially trained to do that by the producers?) Based on all these clips, it seems as though Jen and Nick are heading in the direction of the Bachelor in Paradise Final Rose Ceremony — but do they get engaged and are they still together now?

That's a little more difficult to tell. Sure, certain Season 3 couples haven't exactly been hiding their relationships post-show, but either Nick and Jen are broken up or they're keeping their relationship on lockdown. In fact, since Season 3 wrapped, Nick has very publicly been hanging out with a lot of his Bachelor Nation buds and Paradise cast members, including Emily, Haley, Ashley I., and Jubilee. Plus he's done Bachelor appearances while Jen has gone back to her normal life.

Does that mean this couple left their love in Paradise? Well, it could just be masterful secret keeping — or it could mean Jen and Nick's relationship doesn't work out. Even though Nick may pick out an engagement ring, that doesn't necessarily mean they get engaged. We'll have to watch the rest of this season of Bachelor in Paradise to find out!