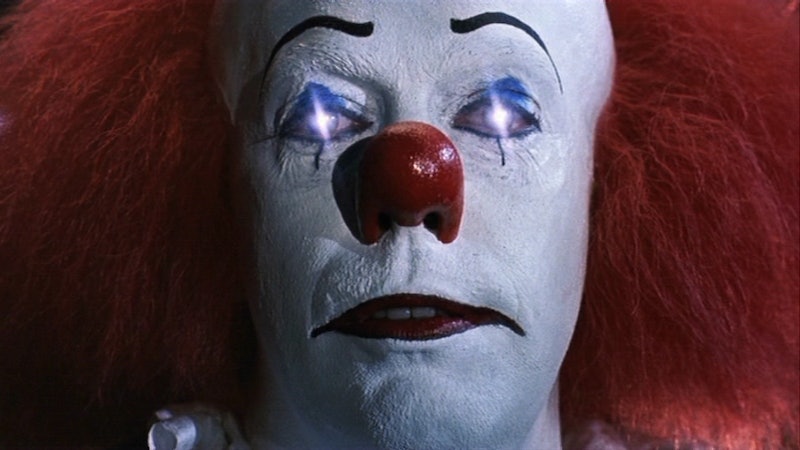 A few weeks ago, Stephen King fans finally got to see what Bill Skarsgård looks like as Pennywise the Dancing Clown. Now, Entertainment Weekly has an exclusive look at Pennywise's costume in the It reboot. IT looks different from the 1990 version. Creepy different.

It takes on many forms in King's 1986 novel, but the clown is the most iconic and terrifying of them all. With the exception of eye color, Pennywise's appearance doesn't change much over the course of It. Here's how the book describes the clown:

The clown ... looked like a cross between Ronald McDonald and that old TV clown, Bozo — or so he thought at first. It was the wild tufts of orange hair that brought such comparisons to mind. But later consideration had caused him to think the clown really looked like neither. The smile painted over the white pancake was red, not orange, and the eyes were a weird shiny silver. ... He wore a baggy suit with big orange pom-poms; on his hands were cartoon gloves.

When he portrayed Pennywise in the 1990 It miniseries, Tim Curry wore a baggy, blue and yellow suit with a floppy collar, giant pom-poms, and oversized gloves. It was a faithful adaptation of King's descriptions, and Curry's performance made that jumpsuit menacing in spite of the resemblance it bore to M.C. Hammer's getup.

Skarsgård's Pennywise wears a different costume altogether. Though still pom-pommed, and puffy in places, the new Pennywise has scrapped the baggy-everywhere jumpsuit in favor of a peplum doublet and bloomers, with form-fitting sleeves and leggings. Entertainment Weekly reports:

It’s all aimed at creating a subliminal suggestion of a creature with long, lanky limbs, a head and neck like a cephalothorax, and a bulbous, arachnoid abdomen. But this creature is walking upright, and calling to you with a fistful of balloons.

In case you missed it, the It creative team wanted to make Pennywise look like a spider. Stephen King fans everywhere are screaming.

See Pennywise in action when the first half of the It reboot hits theaters in 2017. Until then, sweet dreams, folks. And avoid the deadlights.