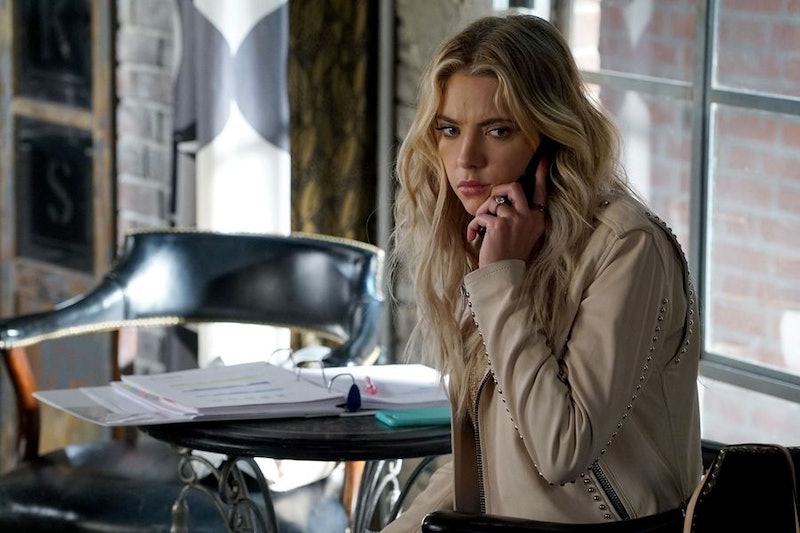 Pretty Little Liars Season 7 is ramping up the drama, suspense, and intrigue, and it's also taking us to some seriously dark places. The Aug. 16 episode "Exes And OMGs" may not have given us the answer to who killed Sara Harvey or the identity of Uber A, but it did introduce us to the possibility that one of the Liars is heading down a seriously dark path. Hanna's actions at the end of "Exes And OMGs" suggests that she is taking a major risk, and it could be a deadly one. Though we're not sure exactly what Hanna is doing on Pretty Little Liars , after making a very suspicious phone call and going to an abandoned cabin, it seems like she is planning to kill Noel Kahn, which would be the darkest move any of the Liars have ever made.

Hanna is still traumatized from being kidnapped by A.D., and rightfully so — this is her second time being tortured by someone who uses the A moniker. Hanna's flashbacks to her time being tortured have only made her more angry, and more ready than ever to put the nightmare to rest. This week's episode saw Hanna convinced that the person who was behind her kidnapping is newly arrived Noel, and though the other Liars are definitely putting him on their suspect list, they aren't ready to flat-out take him down. After a visit from Mrs. Grunwald, who seemed to confirm her suspicions of Noel, Hanna definitely was ready to call him out as Uber A — and she might finally do something about it.

Towards the end of "Exes And OMGs," we saw Hanna on the phone with an unnamed person who, apparently, was willing to trade Hanna a key in exchange for cash. Hanna then tells the person on the line to forget that her name and number ever existed, which is 100 percent shadier than we've ever seen Hanna get. Of course, it's not nearly as shady as moving into an abandoned apartment or cabin and blocking out the windows with newspaper, which could mean one thing: Hanna is getting ready to kill Noel. Though we don't know exactly who was on the phone, it seems that this person was giving her the key to her new hideout and she does not want anyone to be able to find her — including her friends.

We know that Season 7 of Pretty Little Liars is not afraid to go to dark places, but I never thought that one of the Liars would actually decide to go through with a pre-meditated murder. (They tend to just accidentally kill people, OK?) Of course, we have no idea what Hanna is really planning — for all we know, she could just need some serious R&R. However, if she is attempting to kill, or even merely kidnap, Noel, that would be a far cry from the Hanna we used to know.

Hanna is totally spiraling, and if she's thinking about going head-to-head with Noel, she might need her friends to reel her back in ASAP before things get even more dangerous.