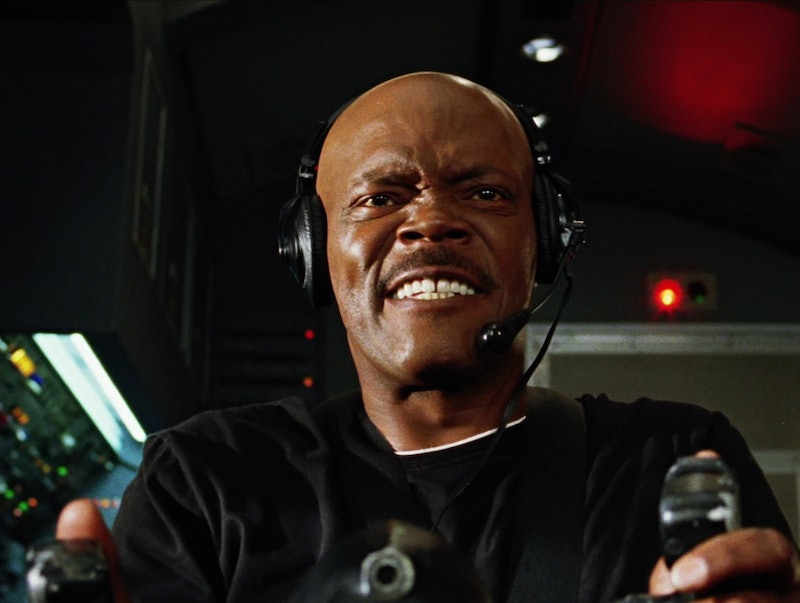 The best movie-going experience I ever had occurred 10 years ago when I went to the midnight premiere of Snakes on a Plane . It was Aug. 18, 2006 and I will never forget the sheer joy that the absurd film about snakes being on a plane brought to the packed theater of hyped young adults. That summer night we were all there for one thing — to hear one of Samuel L. Jackson's greatest movie quotes. When the actor finally said the line about motherf*cking snakes on a motherf*cking plane, he did not disappoint. The crowd in that New Jersey movie theater jumped up for a standing ovation the moment the words left his mouth and since then, I have forever been thankful to Jackson for providing me with that bizarrely bonding event.

Snakes on a Plane has understandably not really stood the test of time — but I'm fairly certain that was never the point. Nowadays, the movie is remembered as one of the first films to generate a ridiculous amount of buzz on the Internet based on so little — i.e., a quote about motherf*cking snakes on a motherf*cking plane, and the title itself. During an interview in 2010 for Lopez Tonight , even Jackson admitted that he didn't know why his Snakes on a Plane quote was "so hot," but I think I know why. Jackson was an established and beloved actor for his curse-heavy roles in renowned Quentin Tarantino films and for being a Jedi in the Star Wars prequels. The fact that this A-lister would stoop to being in what is essentially a B movie (they might have had a decent budget, but it's a B movie through and through when it comes to its content and concept) brought eagerly enthusiastic and immature fans pure bliss.

Snakes on a Plane may not resonate with audiences like it did 10 years ago, but Jackson's movie career is still in full force. With a resume of over 160 movies and tons of talent and swagger, Jackson's catalog is as outrageously quotable as it was back in 2006 and Snakes on a Plane is only a drop in that f*ck-filled bucket. So in honor of the 10-year anniversary of Snakes on a Plane , here are 17 of some of the best Jackson movie quotes ranked. Prepare for some foul language and spot-on delivery and know how tremendously difficult it was not to include pretty much every single line he says in Pulp Fiction.

Full quote: "Now you've seen how bad things can get and how quick they can get that way. Well, they can get a whole lot worse. So we're not going to fight anymore! We're going to pull together and we're gonna find a way to get out of here! First, we're gonna seal off this pool—"

Reason for the ranking: The main quote is nothing to write home about, but it's Jackson's surprising death mid-rallying speech that earns this line a spot on the list.

Reason for the ranking: A tamer quote for Jackson than usual, he showed the difficulties of balancing domestic life and being a superhero in this Pixar film.

Reason for the ranking: Although Jackson's usual attitude was kept intact for his role as chief engineer Ray Arnold, his language was notably toned down (please note the use of the word "crap") for the PG-13 movie.

Reason for the ranking: Don't mess with Jedi Master Mace Windu and his lightsaber. And when Jackson says the party is over — you know it's over.

13. "We're All Gonna Be Like Three Little Fonzies Here."

Reason for the ranking: A personal favorite of mine because no knows more about being cool than Fonzie from Happy Days — except maybe Jackson.

Movie: Die Hard with a Vengeance

Full quote: "Yeah, Zeus! As in, father of Apollo? Mt. Olympus? Don’t f*ck with me, or I’ll shove a lightning bolt up your ass? Zeus! You got a problem with that?"

Reason for the ranking: The third Die Hard movie isn't nearly as beloved as the first, but there's no denying that Jackson's involvement added some extra oomph — like this quote when he reamed out Bruce Willis' John McClane for thinking his name was Jesús.

Reason for the ranking: Perhaps the greatest quote about oral sex that has ever existed came from this Tarantino-penned movie. Jackson may have only appeared in the film for a minute, but he made the most of his moment.

10. "Given That It's A Stupid-Ass Decision, I've Elected To Ignore It."

Full quote: "I recognize the council has made a decision, but given that it's a stupid-ass decision, I've elected to ignore it."

Reason for the ranking: Even as Marvel's Nick Fury, Jackson can't help but add his signature sass and the Avengers are all the better for it.

9. "You Been Taking Them Dick Pills Again?"

Reason for the ranking: This gem from one of Bernie Mac's final films is great as a standalone quote, but is elevated thanks to Mac's seemingly innocent response and Jackson's follow-up line of, "You can't be spooning with a motherf*cker with that!"

Full quote: "AK-47. The very best there is. When you absolutely, positively got to kill every motherf*cker in the room, accept no substitutes."

Reason for the ranking: Another Tarantino collaboration, another memorable quote and this time Jackson's talking to another heavy hitter — Robert DeNiro.

7. "Yes, They Deserved To Die And I Hope They Burn In Hell!"

Movie: A Time To Kill

Reason for the ranking: Kevin Spacey bringing Jackson's Carl Lee Hailey to his breaking point in this tense courtroom scene is the stuff of cinematic gold.

Full quote: "You know me. It's my duty to please that booty."

Reason for the ranking: Do I really need to explain why this quote is so badass? He's Shaft!

Full quote: "Don't give me attitude, sir. See, you're assuming I won't shoot your sorry ass and everyone knows, when you make an assumption, you make an ass out of 'u' and 'umption.'"

Reason for the ranking: Jackson's twist on the adage of when you assume, you make an ass out of you and me could be lame, but he makes it intimidating and hilarious as per usual. And make sure to continue watching the above clip after the quote for more amazing lines about being an "ass-f*cking fan."

4. "And You Will Know My Name Is The Lord When I Lay My Vengeance Upon Thee!"

Full quote: "Well, there's this passage I've got memorized — sort of fits the occasion. Ezekiel 25:17? 'The path of the righteous man is beset on all sides by the iniquities of the selfish and the tyranny of evil men. Blessed is he who in the name of charity and goodwill shepherds the weak through the valley of darkness, for he is truly his brother's keeper and the finder of lost children. And I will strike down upon thee with great vengeance and furious anger those who attempt to poison and destroy my brothers. And you will know my name is the Lord when I lay my vengeance upon thee.'"

Reason for the ranking: While you probably can't go around quoting this verbatim like Jackson still can, Tarantino's made-up Bible verse was so good that Jules said it twice.

Reason for the ranking: Yes, this quote happens just before the quote in spot number four, but this one gets the extra edge for its ease of use in everyday life. Plus, "What" is no country that Jules has ever heard of.

Reason for the ranking: A classic line that can be used beyond just warning about impending dinosaurs.

Movie: Snakes on a Plane

Full quote: "Enough is enough! I have had it with these motherf*cking snakes on this motherf*cking plane! Everybody strap in. I'm about to open some f*cking windows."

Reason for the ranking: Jackson's iconic and rage-filled quote was pretty much the only advertisement Snakes on a Plane needed. While some other Jackson quotes may be more profound, more witty, or more menacing, this one is the only one that legitimately defines the movie its in. And, in the vein of the quote itself, it's motherf*cking hysterical.