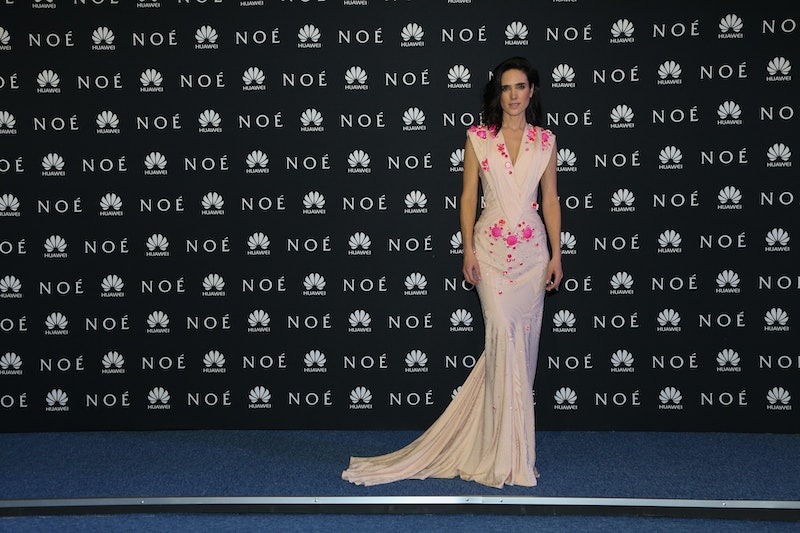 With awards show season taking over the first several months of the year and becoming our nearly unhealthy obsession, keeping track of all the fabulous red-carpet gowns that have made their debut over the past several weeks is pretty hard. It's even harder to go back, remember, and rank all of our favorite dresses, who designed them, who wore them, and where they wore them at this point in the year.

But Golden Globes, Screen Actors Guild Awards, and Oscars aside, we think we’ve found a dress that’s in the running for best red carpet look of 2014 to date (and maybe even for the entire year to come): the stunning Givenchy Couture gown that actress Jennifer Connelly wore to the Mexican premiere of her upcoming film, Noah .

The blush pink couture gown swept the floor and sparkled brilliantly, thanks to the neon pink jeweling and embellished detailing along the shoulders and midriff. Revealing just the perfect hint of cleavage, the draped, v-neck gown gave the actress a gorgeous hourglass shape, and paired with minimal makeup and no jewelry, it came together for a look far more glamorous than anything we’ve ever seen on Connelly — or many of her fellow actresses, for that matter.

The Givenchy gown is a far cry from what the actress typically sports for red carpet appearances. After all, Connelly — who has also starred in films like He’s Just Not That Into You and A Beautiful Mind — loves a good graphic gown, like the Chanel Couture creation she sported at the 2014 Berlinale Film Festival and the multicolor Balenciaga dress she wore to a premiere of The Tourist in 2010.

But more than anything else, you’re most likely to see her in simple all-black numbers, like the strapless Gucci number she wore to 2012 Cannes Film Festival or the two-piece ensembles she’s been spotted in on numerous occasions. And with that fair skin, jet-black hair, and amazing bold eyebrows, she looks so good in the dark hue that we don’t even blame her.

It’s been far too long since we’ve seen Connelly in full-on color (perhaps all the way back to 2009, when she wore an oddly fitting red Bottega Veneta dress to the 2009 Toronto Film Festival) that we forgot how amazing she looks when she lightens things up.

And it’s not just the color on this Givenchy gown that’s so refreshing; it’s the shape, too. Connelly often sports loosely fitted gowns; high- or boat-neck tops; and knee-length skirts that fail to show off her gorgeous figure. But the v-neck, wide shoulders, and delicate draping on her Noah premiere gown combine to show off her killer body in the most elegant way possible.

We have to admit: We’ve never been this excited to see Connelly on the red carpet, nor did we expect to wait with bated breath to see what she’ll wear for the remainder of the Noah press tour. And when co-star Emma Watson finally joins her on the red carpet, we may just die from all the fashion excitement — which is never a bad way to go.