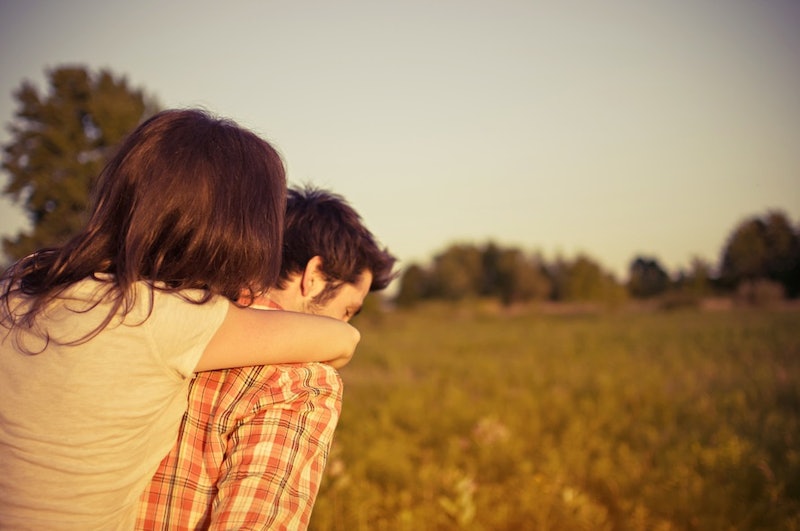 If there is a topic of conversation that stresses couples out, "the future" is it. You guys can talk about anything — food, religion, anything. But drop words like "babies" or "marriage" into the mix, and suddenly the stress sets in. It's almost like there is no way to talk about the future in a laid-back way. It's either 100 percent avoided, or grounds for a heated, dreaded debate.

While it's not ideal, it does make total sense why this happens. Such topics obviously require a lot of thought, and to have two people on the exact same page can be pretty tricky. This is especially the case if you're in a new relationship, and haven't yet reached a stage where you're both ready to chat about the bigger things in life.

But even if you have, talking about the future can dredge up some underlying issues. "Many times, couples already know that their goals for the future are not aligned with their partner's goals," says Kim Chronister, Psy.D., in an email to Bustle. "As a result, they avoid the conversation about the future altogether." It feels like the best option to avoid a breakup.

And yet, talking about the future is still so important. Maybe you don't have to corner each other and have a heavy debate, but you still should make such chats a priority. Below are some ways to go about it in a laid-back way, so neither of you have to lose any sleep.

The last thing you want to do is force a heavy conversation with your partner. So don't set a date on the calendar, or awkwardly pull up a chair to have a chat. "Instead, let it happen naturally," suggested an article on eHarmony.com. "The more seamlessly you can allow information to simply emerge as part of your normal conversation, the less pressure your partner will feel."

2. Don't Look At Your Relationship As "All Or Nothing"

Talking about the future can be scary, because what if you two don't share the same goals? While this can sometimes be a deal breaker, it doesn't have to be and shouldn't prevent you from bringing up the subject. As Chronister says, "Avoid all or nothing thinking — there is likely a middle ground when it comes to negotiating the future."

3. Only Refer To Your Hypothetical Spouse

If you want to avoid freaking each other out when talking about the future, then don't refer to each other as your husband or wife. In fact, don't even hint at it. Keep all conversations about your future partner purely hypothetical, according to Monica Gabrial Marshall on VerilyMag.com. When the time is right, you'll both start naturally filling that role for each other — no pressure needed.

Again, if you want to keep this convo laid-back, then avoid heavy topics at all costs. "It’s not that the discussion has to remain ultra light, but especially if it’s early in the relationship, you may not want to say, 'We need to have a serious talk about how we’re going to save for our retirement,'" noted eHarmony.com. Instead, try bringing up smaller money issues, and build the conversation from there.

5. Write Down Your Goals Together

"If your partner isn't a fan of your vision for the future, write down options together of what your goals as a couple may look like," Chronister suggests. Not only will this help you both see things clearly, but it can make moving forward with deeper conversations feel much easier.

Timing is everything when it comes to talking about the future, so it’s important to listen to your instincts and use your best judgment, according to eHarmony.com. Don't approach your partner when you're out trying to have fun, for example. And if a conversation feels awkward or forced, take it as your sign to try it again later.

I know, you want information and you want it now. But that's still no reason to back your partner into a corner, or grill them incessantly. "The last thing anyone wants is to be the object of an interrogation," said eHarmony.com. "You’ll both enjoy the discussion a lot more if you focus on learning about each other instead of having to administer or pass some sort of test."

8. Resist Scaring Them With A "We Need To Talk"

If there's a scarier statement on this planet, please let me know. Because honestly, those four words can make anyone's blood run cold. So don't do this to your partner. "Talk about it when you talk about it, and that’s it," said Angela Walker on TheBolde.com. No need to be so dramatic.

Before starting any chats about the future, decide what it is you'd like to know or ascertain. According to Walker, knowing where the conversation is going can help it be productive. And it can also prevent it from spiraling out of control.

10. Give Them Time To Think

When talking about the future, take notice if your partner is floundering or searching for responses. Just because you may have all your future dates and time frames perfectly organized in a three-ring binder, doesn't mean your partner does. Giving them time to think — without demanding immediate responses — can help keep things relaxed.

It can hurt if you've already named your hypothetical kids, only to find out your partner hasn't even considered having them. If this happens, keep in mind that everyone has different ways (and time frames) when it comes to thinking about things. And this is precisely why you shouldn't get offended by seemingly mis-matched priorities, according to Shannon Deep on HuffingtonPost.com. Just because your ways of thinking are different doesn't mean things can't (or won't) work out.

12. Don't Read Into Everything They Say

When heavy, potentially life-changing topics are being discussed, emotions will undoubtedly run high. So go into the convo telling yourself that, no matter what, you won't read into things. As Walker said, "Immediately going on the attack, questioning what the things he says really mean and whether he’s being genuine or not can make what should be an intimate conversation into a nasty memory." And that won't do anyone any good.

If you want to sneakily gauge your partner's future life goals, ask them where they see themselves in ten years. Or, ask them how they want to feel when they look back on their life, according to Carrie Muphy on Women's Health. This is a chill way to get the convo going, without stressing each other out.

That's the goal for all of these tips — a nice conversation about the future, that's super laid-back and relaxed. Keep them in mind, and the two of you will be discussing your goals with the greatest of ease.