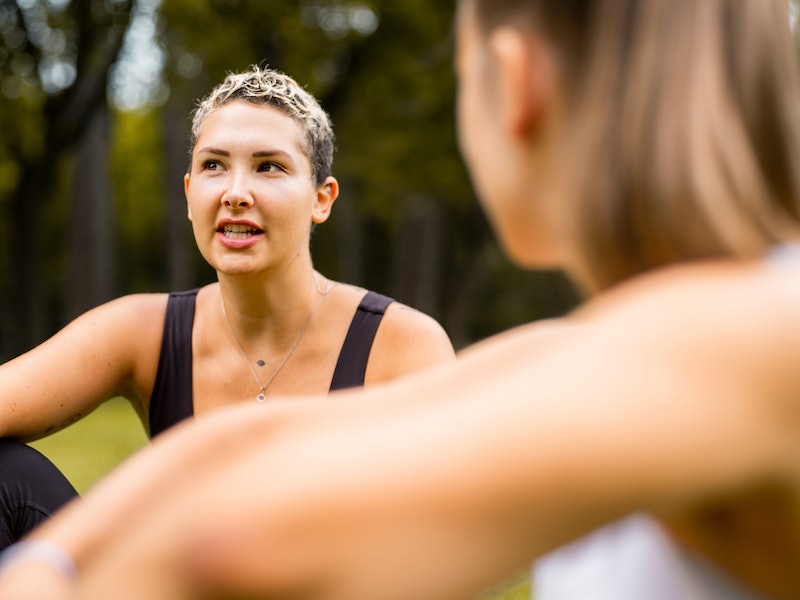 Psychopathy is an area of psychological study that will forever fascinate the public, but the opposite end of the spectrum can be just as interesting. Over the course of decades, research has turned up all kinds of weird facts about empathy — where it's regulated, how it works, and what makes some people hide their faces in agony during medical documentaries while others chill out on the couch, stone-faced and more than a little judgmental. You know how you can tell they're judgmental? Empathy. Also, they're probably making fun of you.

For those who missed this bit of psychology class, empathy is similar to, but still distinct from, sympathy and compassion. To put it simply, sympathy is the feeling of being sorry for someone's misfortune and wishing them well, while compassion is feeling sorry and actively wanting to help. Empathy, however, is about taking on someone else's perspective, so you feel a reflection of what they feel. (As you'll see below, "reflection" is meant in a more literal sense than you might think.) The capacity for empathy varies from person to person — people with psychopathy, for instance, are infamous for their ability to switch it on and off at will — but virtually everyone can feel empathy to some extent. There's even evidence that we empathize with robots, which goes a long way toward making everyone's crush on Michael Fassbender in Prometheus a little less awkward.

And so, without further ado, here are seven facts about empathy to trot out at parties.

1. Empathetic People Are Quick To Help Others

It's no secret that when nobody else is looking, most people are a little selfish. A recent study from Oxford University didn't dispute that; according to their experiment, people are quickest to learn a new task when it benefits them. But here's the interesting part: When a new task benefited another person, people with higher levels of empathy were quicker to figure out how to "win" than people who scored lower in measures of empathy. In short, it's possible that people who are more empathetic try harder to help others.

2. Painkillers Reduce Your Capacity For Empathy

Acetaminophen reduces pain, but according to a 2013 study, it also might temporarily dull your empathy. In a series of experiments, researchers demonstrated that people who have taken acetaminophen are less likely to think other people's social or physical pain is a big deal. They couldn't point to a specific cause for their findings, but it might have something to do with the structure of the brain — previous research has shown that the same areas are activated when someone experiences pain and imagines other people going through the same experience.

3. Your Brain Is Wired To Reflect Emotions

Since the early 2000s, a new theory of empathy has emerged among neuroscientists: Empathy may stem from something called mirror neurons, which respond the same way whether you're performing an action or watching someone else do it. Although some have said the importance of their role has been exaggerated, there's a substantial amount of evidence suggesting that mirror neurons play a part in empathizing with other people.

Perhaps unsurprisingly, research has shown that your emotional state influences your tendency to empathize with other people. According to a 2015 study, people are more likely to display egocentrism — thinking their own perspective is the most important — when they're feeling anxious, even compared to other negative emotions like anger or disgust.

In a study that could explain part of everyday discrimination, researchers at the University of Milano-Bicocca found that people don't respond in the same way to other people's pain. The study participants, who were all white, were shown clips of a needle or eraser touching someone's skin; at the same time, their reactions were monitored through skin conductance. Researchers found that when they saw a needle touching white skin, the participants reacted far more dramatically than when they saw a needle touching black skin.

This doesn't necessarily mean every participant was cartoonishly racist. Researchers also measured participants' attitudes about privilege and hardship, and people felt less empathetic pain when they thought the skin belonged to someone who had been through difficulties. Essentially, as The Atlantic explains, "There is an underlying belief that there is a single black experience of the world. Because this belief assumes blacks are already hardened by racism, people believe black people are less sensitive to pain." Some have taken to calling this phenomenon the "racial empathy gap."

On a less depressing note, there are a number of ways to increase empathy, and meditation is one of the easiest. According to a small 2012 study, people who meditated regularly for eight weeks were far more empathetic at the end of the study than those who simply participated in health education classes.

Finally, according to a 2013 study, people who read perform higher on measures of empathy. Well, sort of — people who read nonfiction were no better off than those who didn't read at all, and genre fiction isn't much better. However, people who read literary fiction saw significant improvements in their capacity for empathy. If that's not an excuse to finally finish Infinite Jest, I don't know what is.