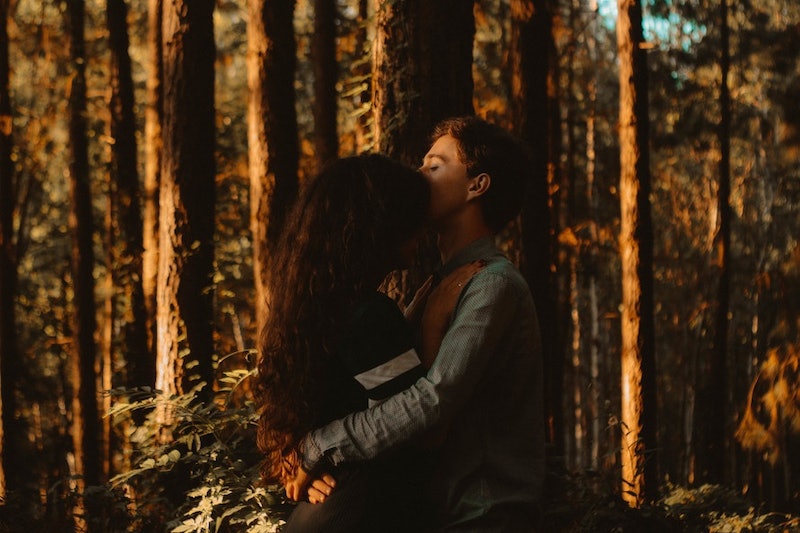 It's easy to lose sight of what might be true or false in life, especially when it comes to relationships, as we can find ourselves with a skewed perception when we are searching for desired truth. Yet, sometimes we're dating a liar and just simply cannot see it. We tend to dismiss thoughts that are unpleasant, as we just want to feel happy with the people we are with.

As a certified health coach, I realize that this is a tricky situation. Relationships can build us up, making us feel complete and connected to the world and the people around us. It's wonderful to have someone to spend time with, be yourself around, and come home to (if you're living together). However, sometimes our relationships can be harmful, as there are elements of toxicity and deception that can exist, without us even knowing about it or admitting its existence. We tend to protect ourselves from bad things, and sometimes that leads to denial. However, if your partner is lying to you, it's definitely something to pay attention to and remedy, as deception over time can be dangerous to mental health and wellbeing if untreated. Here are eleven ways to know if you're dating a liar so that you can protect yourself and address the situation.

1. The Stories Don't Match Up

If your partner's stories don't seem to match up, where information changes and seems apparently false and question-worthy, then there's a high probability that the story is not true and that he or she is lying to you, says Chicago-based licensed marriage and family therapist, Erika Fay, LMFT, over email with me. "If there are consistent holes in the story or if you feel like you never really know what is going on, it might be an indicator that you may not be getting the full story," she says.

2. Your Gut Is Telling You Something's Off

If your gut instinct is telling you that he or she is shady and that the stories don't add up together, then it's worth trusting your intuition, as it's probably right, says Fay. "Be mindful of your 'gut feelings.' If something doesn't add up consistently, you are probably on to something. A person's statements and actions should usually match up," she explains.

3. Your Partner Goes Missing On Weekends

While the workweek can be pretty standard, where the partner works all day and either comes home at night or goes about his or her evening accordingly, the weekends leave more room for socializing together as a couple, without such work stress. If "he or she can never see you on weekends," says New York City based psychiatrist Dr. Judith H. Tanenbaum, over email with me, then he or she might be lying to you about real whereabouts.

4. You Can Sense A "Relationship Rut"

If you can see that your intimacy has reached a low point, where perhaps you are not emotionally connecting, spending adequate time together, participating in engaging conversation or showing much affection, then a rut is likely and your partner could be compelled to start lying to you. "If you’ve identified that you’re in a relationship rut, it’s important to have an open conversation with your partner about how and where each other’s needs are not being met," says Chicago-based therapist Chelsea Hudson, LCPC, over email with me.

5. You Know They're Cheated In The Past

If you know that your partner has cheated on an ex in the past, it's likely that he or she will cheat again, and on you, advises Monique A Honaman, as a guest author on eHarmony, who specializes in love and divorce advice. If you've heard different stories about previous relationships and know that there's been some shadiness, it's possible that the lying will carry over into yours.

6. They Speak In An Emotionally Unstable Way

If your partner's phrasing, tone and emotional language is off, then it's possible that he or she is lying to you, as erratic outbursts, shaky tone and weirdly constructive and defensive statements are pretty unusual, especially when you're supposed to be in a comfortable, familiar place with each other. If they're language is odd, keep your guard up.

7. Your Partner Takes A While To Respond

According to a study in 2013 at The University of Nebraska and The University of Arizona, your partner might be lying to you if he or she takes a long time to digitally respond to you over email or text message, and it's probably safe to say that this extra length might also carry over into in-person conversations, as well.

8. There's Too Much Or Little Information

If your partner either supplies too much or too little information when telling a story or explaining his or her whereabouts, then it might mean that he or she is lying to you, says Jenny Lee, coauthor of Women Are Crazy, Men Are Stupid in interview with Glamour. Lies can have too many details that can signal they're erroneous, while others can make people nervous to speak about and cause them to tense up and hide details.

If your partner is overly secretive or shady, such as he or she is always heading for the shower upon arriving home, pays mostly in cash, has different sets of keys, has several different credit cards (and won't tell you what they are for!), or has different cell phones or numbers, then it might mean that something is up, says Nancy Dreyfus, author of Talk to Me Like I'm Someone You Love: Relationship Repair in a Flash in interview with Glamour.

10. Their Body Language Is Strange

If your partner starts tensing up, scratching his or her arms or face erratically, begins to sweat or shake his or her limbs, or gets rosy and flushed in the cheeks, then these body signal signs can indicate that he or she might be lying about where he or she had been earlier or with regard to whatever question is being asked, says body-language pro Lillian Glass, Ph.D., author of The Body Language of Liars, over interview with Women's Health.

11. Their Nose Starts To Itch

According to Dr. Alan Hirsch of The Smell & Taste Treatment and Research Foundation in Chicago, in interview with Huffington Post, lying can release histamine, which in turn will make the nose start to itch. If you see your partner begin to scratch his or her nose when answering a statement, it might mean he or she is lying to you.

No matter what else is going on in your relationship, it's important to pay attention to the warning signs of a liar, as it's never good to put yourself in a position to be deceived and treated poorly. You deserve to feel connected to your partner and be able to trust him or her, so if lying is a real issue, it's worth reconsidering the relationship.