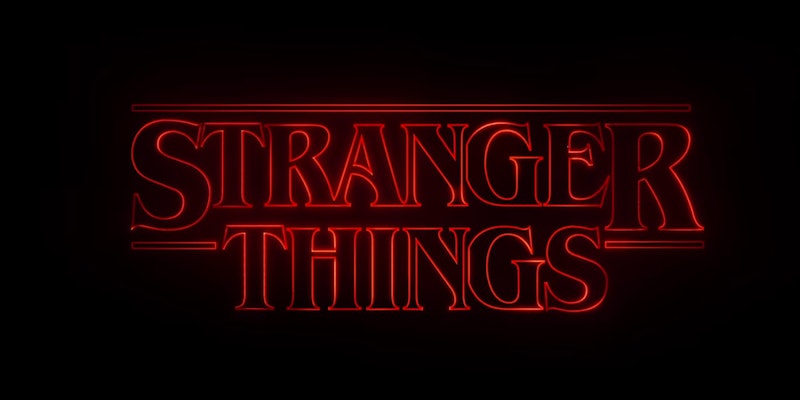 Without exaggeration, I watched Stranger Things within a 24 hour period, and that includes a full work day. So, I suppose you can say I'm just a wee bit obsessed with the Netflix series. I'm not ashamed, though: I know there are a slew of others like me that consumed the material in an impressively short amount of time and haven't stopped being able to think about it since. Which is made readily apparent by the "Strangeify" app that lets you write in the Stranger Things title sequence font. They know what the people like and want, that's for sure.

In fact, the Stranger Things font has become somewhat of a phenomenon. There have been quite a few write ups on just how great the title sequence is in terms of being "retro" and indicative of the enticing yet unsettling mood that the show sets. As Collider puts it, "The biggest surprise of Netflix’s breakout hit is the massive outpouring of love for the retro font featured in the title sequence," which they explain is known as ITC Benguiat. So, you know, the fact that you can now use it at your own whim is just about the best thing a fan could ask for. But, what should it be used for? Well, Arrow writer Brian Ford Sullivan shared a tweet reimagining what the show's title would look like, and I thought that was an inspired idea. I took his lead and tried it on a few other shows, you know, for some creepy fun.

Here are some of your most favorite shows, past and present, that have been reimagined with the Stranger Things font. Because it gives these shows an entirely different, stranger feel:

Gone are Lorelai and Rory, I just keep picturing those twins from The Shining.

Considering I only watch some embarrassing scenes with horror, this feels appropriate.

This title upgrade makes me think, what exactly are Bob's burgers made of?

Definitely getting the 1984 vibe that I think is missing from the actual show, ya know? It's what George Orwell intended.

Looks like a remake for Rosemary's Baby. Consider me shaken.

Dwight would be pleased with this.

For the record, I never trusted Mr. Snuffleupagus.

Honestly, with all the death and destruction, this kinda works.

"Xoxo, Gossip Girl" seems a whole lot more like a serial killer greeting when you put it this way. *Peeks through fingers*

I think I've had enough of these shows in the upside down. *Turns on lights*