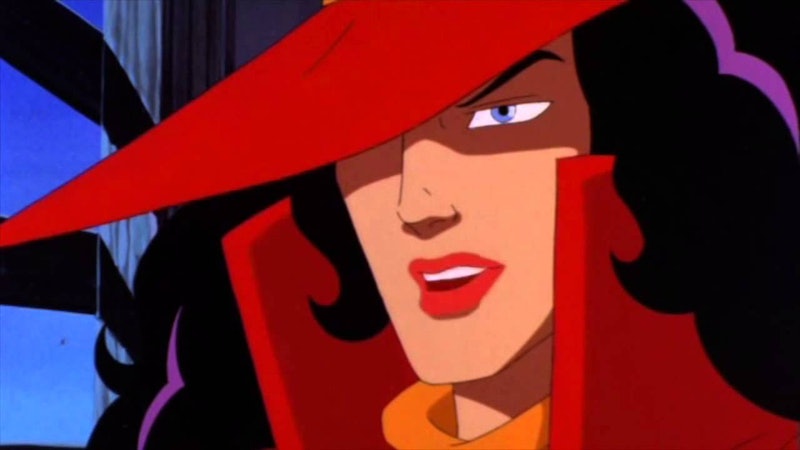 If there was a computer in my vicinity, then the one game I wanted to be playing above all was Carmen Sandiego. In the '90s, Where in Time Is Carmen Sandiego? could lure me in for hours, helping ACME track the genius thief with the sense of dramatic style through time and space. I even watched Where In The World Was Carmen Sandiego? , the animated series which opened with her being bold enough to steal the Mona Lisa's smile. While my interest in computer games waned, my love for Carmen Sandiego never did. So, you'd think I would be delighted and relieved that Huffington Post reporter Todd Van Luling managed to track down the actress who played Carmen Sandiego — at least in the 1996 PBS game show. This was the Where's Waldo? of my childhood, the one question that everyone always asked but never got to know unless they won the game. Sometimes, not even then. And yet, knowing who Carmen Sandiego really is now made me realize that I didn't want to know. I never wanted to know. That was never the point.

This question took Van Luling 20 years to answer. Like most fans of the series, he was obsessed with the question. He wrote,

As a lowly content creator on the internet, I am obviously powerless to make this stop in any meaningful way within the scope of my day job. But since this year marks the 20th anniversary for “Where in Time?” I decided I could at least go after the villain I grew up with in a quest to bring a very small smidgen of justice to the world.

It's an incredibly noble goal and, in reading about his journey to find the actress who brought Carmen to life, I felt almost the same rush as I used to get from watching the series or playing the game, with the knowledge that, by devoting my time and brain power to this mystery, I would reach a satisfying conclusion. But, by the time I read the article's last lines — "It may have taken 20 years, but I finally found Carmen Sandiego. Let God, the Chief and Mark Zuckerberg know, I am now content." — I realized that I wasn't content. In fact, my inner child was throwing a fit. After all, wasn't part of the allure of Carmen Sandiego the mystery that surrounded Carmen Sandiego? The fact that, even if you stopped her latest scheme, she would always escape to rise again somewhere else, bigger, badder, and more stylish than before? In playing Carmen Sandiego, did any of us really see a villain to be stopped or did we just see an antagonist too-cool-for-school whom we could only emulate in nerve and intelligence by defeating?

Carmen Sandiego was more legend than woman, a legend that loomed so large that no one questioned her ability to steal the Mona Lisa's smile or "all the goulash." No one questioned her ability to travel through time to steal an uncracked Liberty Bell, or somehow keep unearthing endless amounts of henchmen with punny names. She was a larger than life figure on the same level as Santa Clause and the Easter Bunny, in terms of what children were willing to accept as undeniable fact. Hell, the length of the brim of her hat kept changing length and arc across games and adaptations, and I didn't even bat an eyelash. If anyone could do the impossible, it was Carmen Sandiego, because she was the impossible. She was the greatest mystery that no one could solve.

The fact that someone finally did solve it takes the wind out of my sails. Just a little bit.

And that is what Carmen's actress, the mysterious Janine LaManna, says was exactly the reason her identity was kept secret in the first place. “Because of the mysterious aspect of her, I don’t think they ever wanted an actor to be [associated with Carmen],” she said to Von Luling. “They didn’t ever want to reveal my face probably. Then you would reveal Carmen." Well, Carmen has been revealed. And I think it's amazing that LaManna was able to hold onto the secret for so long. I think it's even more amazing that Van Luling was able to track her down after 20 years. But I still wish that I didn't know.

Much like finding out that Santa Clause was really my parents, and that babies don't really come from the store (my parents weren't "the stork" kind of people), knowing that behind Carmen Sandiego is a person takes some of the magic out of the myth. A person can't steal the Mona Lisa's smile or travel through time (yet), but Carmen Sandiego could do it all before cell phones were even really a thing. I never needed to know who she was or how she did it. I just needed to know that she did it, where she was last seen, and that I have an hour or until my parents call me up for dinner to stop her from getting away with it.

Even now, as an adult, that's still all I need to know.