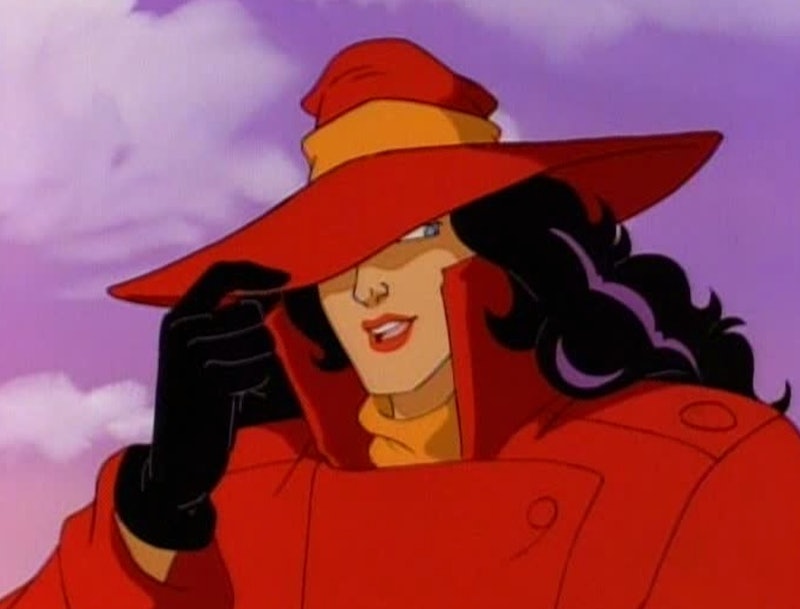 For the last 30 years, a devious villain in a red trench coat and her minions have wreaked havoc on the universe. Sure, her schemes are foiled more often than not (the folks at ACME Detective Agency are to blame/thank), but she will never give up on her evildoer dreams. No, I’m not talking about Red Coat from Pretty Little Liars. I am referring to the titular character from the Carmen Sandiego computer games, TV shows, and board games. Sorry Red Coat, but when it comes to wearing a crimson jacket and committing crimes, Carmen Sandiego is the queen. I mean, we are talking about the woman who traveled through time and stole the Roman Forum. LEGENDARY.

Not only has the edu-tainment franchise given us countless Carmen SD shenanigans, but it's also given us some legitimately great music. Which Carmen Sandiego song is the very best of the best? Don’t worry, I have the answer for you. I took it upon myself to rank the most notable tracks from the computer games and television shows. So grab your passport, gumshoe, because we’re about to embark on an adventure. A Carmen Sandiego song ranking adventure.

#6: The Intro To The Carmen Sandiego’s Great Chase Through Time Computer Game

The very moment I decided to rank this song last, I felt an ulcer start to form in my stomach. I hate that I ranked this song last. Sorry, instrumental intro to my favorite Carmen Sandiego game, but the competition is that stiff.

#5: The Intro To The Where In The World Is Carmen Sandiego? Deluxe Computer Game

#4: The Where On Earth Is Carmen Sandiego? Animated Series Theme Song

This one is OK, but it's not as catchy as— Hold up. I'm going to stop myself right there, because that’s a Mozart song hanging out underneath those lyrics. I rescind my original comments. This theme song is a literal masterpiece.

#3: The Where In Time Is Carmen Sandiego? Game Show Theme Song

This is a great jam. However, it'll always be in the shadow of “Where In The World Is Carmen Sandiego?”, aka the—spoiler alert!—ruler of the Carmen Sandiego song kingdom.

#2: The Intro To The Where In Space Is Carmen Sandiego? Computer Game

This might be my most controversial ranking, but whatever. Have you listened to this tune? It brings the heat. So yeah, I do stand by ranking this as highly as I did.

#1: “Where In The World Is Carmen Sandiego?” By Rockapella

Not only is this a cappella track the best Carmen Sandiego song, but it is one of the best themes in television history. It's as iconic as Ms. Sandiego's monochromatic ensemble. Disagree with me? Take it up with The Chief. She'll set you straight.