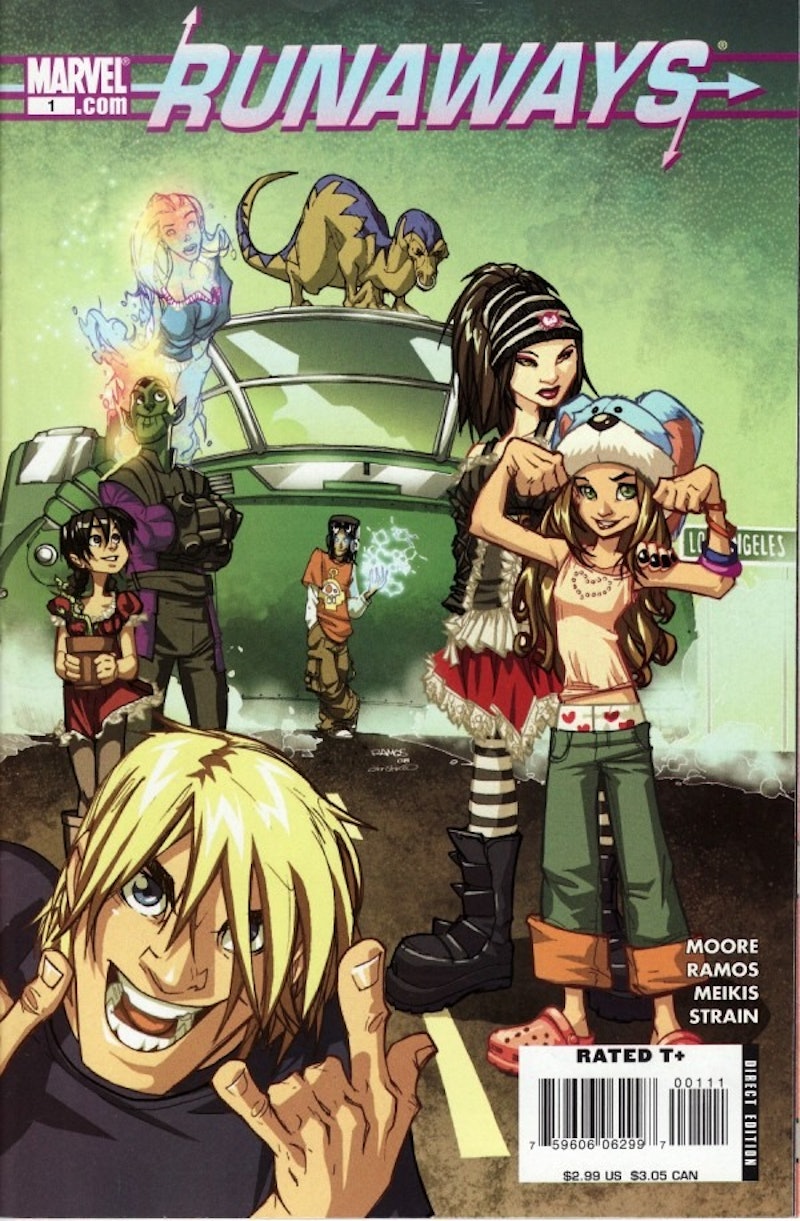 Between The CW's bevvy of DC superhero shows and Netflix's assembly of Marvel series, it would be reasonable to assume TV has more than enough super-powered heroes running around. However, don't think that means there won't be any new ones: Deadline reports Hulu and Marvel are teaming up to bring you a Runaways TV series for the streaming site, the one superhero show you did not know you needed in your life. And I promise, you do need it because it will be nothing like any of the other hero shows on TV.

Based on a comic book series created by Brian K. Vaughn, Runaways is about a group of teens who find out their parents are supervillains. The six teens are not OK with this development at all. They band together in order to leave the world of corruption their parents are part of behind, but they don't suddenly don capes and start trying to even the karmic scales of justice. Runaways is a story set within a universe where heroes like Iron Man and Captain America exist, but the teens are not superheroes in the traditional sense.

The characters all have powers they slowly discover over the course of the series, but Runaways is first and foremost a coming of age story. That's why it makes perfect sense for Josh Schwartz and Stephanie Savage to bring Vaughn's vision to life for Hulu. Schwartz is the creative mind behind The O.C. and Chuck, and he worked with Savage on The CW's Gossip Girl. These two know how to write teens and action — the two essentials for making a Runaways adaptation work.

There are far more important reasons why Runaways will be not only a completely new kind of superhero show, but a vitally important one. Nico, Alex, Karolina, Gert, Chase, and Molly's story is majorly progressive in all the best ways. Here are just a few things a Runaways series will bring to the superhero TV landscape.

A Diverse Cast Of Characters

Runaways features characters of color prominently in lead roles. Nico, the de facto co-leader of the teens, is a bisexual, Asian witch with some seriously impressive powers. Alex is a black comic book nerd, Gert is a plus size teen who rocks purple hair, and Karolina is a lesbian alien. The characters who are introduced later in the series are just as wonderfully diverse including the gender neutral Xavin.

The comics allowed the young characters to explore and discuss their sexuality as part of the coming of age process. For major LGBTQ characters like Nico, Karolina, and Xavin coming out, dating, and romantic relationships are all portrayed with the same respect and attention to detail as their other teammates' relationships. More than that, Runaways portrays LGBTQ youths as powerful heroes.

All of the characters are teens and the evolve so much as they discover their individual powers, embark on romantic relationships, form friendships, and kick a lot of butt. The coming of age aspect is something hero shows centered around adults can't explore, but there is a rebellious heart at the center of Runaways that will make you cheer.

All The Fantasy/Sci-Fi Tropes

Psychic dinosaurs, time travel, vampires — Runaways is all about breaking the rules. The story crams in all manner of comic book, sci-fi, and fantasy tropes, and makes them work. If you love to geek out then Runaways is can't miss.

The youngest and strongest member of the team, Molly is hilarious, adorable, and she once beat up Wolverine. She is the actual best.