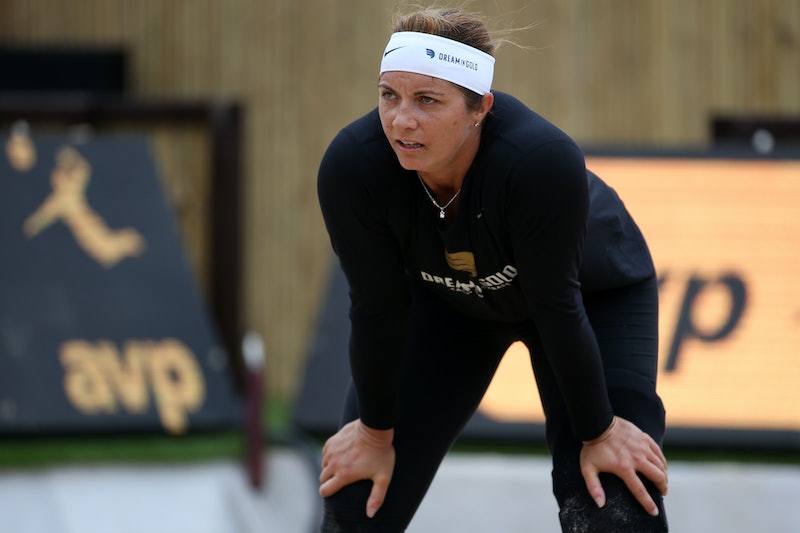 Kerry Walsh Jennings and Misty May-Treanor are probably the two biggest names to ever come out of the sport of beach volleyball. The legendary duo's incredible gold medal three-peat at the 2004, 2008, and 2012 Olympic games will go down in history as one of the greatest athletic achievements of all time. Although Walsh Jennings returned for the Rio Olympics, you won't see her with her former and famous partner. May-Treanor isn't playing volleyball anymore, but she's still involved in the sport that she devoted her early career to.

May-Treanor famously announced her impending retirement just before she competed, and won gold, in the London Olympics. Although she admits that she'll occasionally play with a friend who's in a bind and needs a partner, she suffered a knee injury in 2011 that still flares up enough to keep her off the court. She told NBC that she's considering getting a knee replacement, but only so she can be more active for her family.

Since her retirement from her competition career, May-Treanor's family has certainly kept her busy. In 2014, she gave birth to a daughter, Malia, with her husband, former Florida Marlins catcher Matt Treanor. In her 2010 book Misty: Digging Deep in Volleyball and Life, she wrote that she wanted more than anything to be a mother. So even with her three Olympic golds, her greatest wish is coming true now. "My biggest goal for the future is motherhood," May-Treanor wrote. "I'll tell you right now, becoming a mother would rank as my greatest accomplishment of all."

But her love for motherhood hasn't kept May-Treanor away from the volleyball world. She recently accepted the position of head coach of both the indoor and beach volleyball teams, as well as the director of volleyball operations, at Long Beach City College, a community college near her home in Southern California. May-Treanor could have had her pick of coaching positions at any Division I school, but she felt called to work at the community college level, like her parents had when she was younger.

“A lot of people want to coach in the NCAA, I’ve always wanted to coach at the community college level,” May-Treanor told The Long Beach Press-Telegram in July. “I love working with those athletes, both my parents coached at Santa Monica Community College when I was growing up. That’s what I was raised around.”

Although she's not in Rio watching from the stands, she's been following along with the Olympics closely, cheering on her former teammate from home. This is May-Treanor's first Olympics not as a competitor in 20 years, and she confessed in a Facebook post that it was a "strange" feeling. Still, she radiated gratitude through her social media post, reflecting on her incredible opportunity to have gotten the chance to compete at all. "Hard to believe it won't ever happen again, but very fortunate enough to have done it more than once," May-Treanor wrote on the night of the Opening Ceremony.

May-Treanor's graceful and victorious exit from competition life is one of the reasons she will always be remembered as such an inspiring athlete. Although she no longer plays herself, her new capacity as a coach ensures that her legacy will live on through her players.