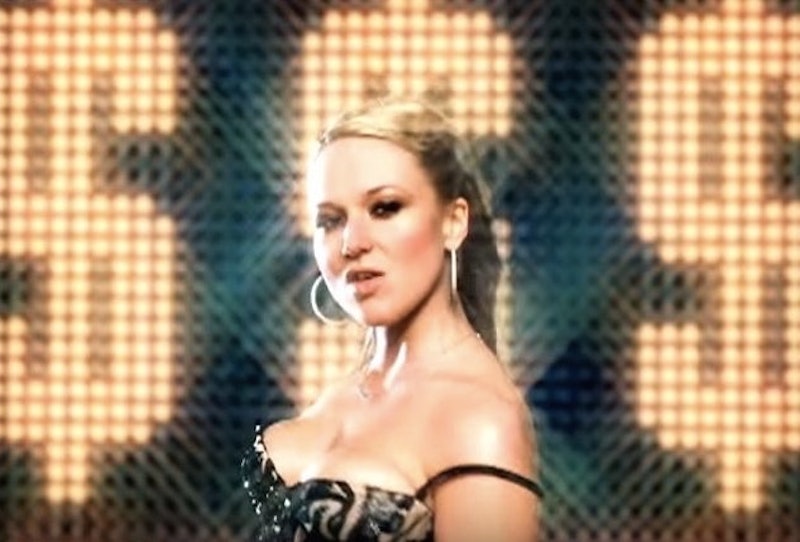 Jewel was the singer who sung about her small hands and cracking yolks into smiley faces. She was earnest, honest, and folky — definitely not the typical pop star. But, in 2003, Jewel released "Intuition," and it seemed like she was looking to change that. The video for "Intuition" looks straight out of the early 2000s: the trucker hats, the product placement, the TRL references. The lead single, off her fourth studio album, 0304, is a synth-heavy pop track that sounds more like something Shakira would have put out. But, looking back now, 13 years later, it seems like that was the point. This wasn't the singer behind "Who Will Save Your Soul?" selling hers; it was her poking fun at the state of music at the time.

In the video, there's even a crawl going across the screen that reads, "Jewel's music sounds much better now that she's dancing." Give the video another watch, and it feels less like Jewel trying to compete with the Britneys and the Christinas and more like a commentary on the music business and how it exploits young women, turning them into objects of desire. They're just brands to be sold, and there's no one there to help them save their souls. Eight years after her debut album, which cast her as the yodeling Alaskan who spent time living in her van, Jewel was playing with the idea of image.

When she spoke with Today in 2003 on the set of the song's video, Jewel said the "Intuition" video was a parody "of rap videos, of runways, of pop culture" that had her playing different clichéd roles that woman so often had to play. She is at once the girl grabbing a drink at a hot dog cart before magically becoming the star of a sexy Sprite commercial. After throwing on a corset, she becomes a video vixen who is dropping it like it's hot in front of a light-up sign that read "Big Pimpin'." Jewel is trying to tell us, in a rather tongue and cheek way, she's the same woman, just rebranded. "I’ve never had to quote-unquote sell out, and I wanted to have a video that sort of walked that line and sort of was showing the difference between one’s normal self and one’s fantasy self or the commercialization of America," she said. "The commercialization of myself.”

Jewel is showing how easy it is to get caught up in image over substance. She may have sounded different on "Intuition," but she was still that same person who sang, "People living their lives for you on TV/They say they're better than you and you agree" on "Who Will Save Your Soul?" eight years prior. Jewel hadn't changed; she still took that same attitude, but the times had changed. She told MTV's TRL, "You're looking in magazines and you're looking at TV to figure out how to behave, to the point where you're almost in danger of losing your natural instincts and losing your intuition, losing your ability to make your own decisions." In her opinion, intuition was a "really elusive, fragile thing." One that still needed to be protected.

On "Intuition," Jewel sang about the fickleness of pop culture trends, using Jennifer Lopez's voluptuous figure being in demand over Kate Moss' waif-like look that ruled the '90s as an example. "In a world of post modern fad," Jewel sings. "What was good now is bad." But many fans didn't get the joke and felt betrayed. They questioned how this song that Jewel claimed showed her hatred for advertising could be used to sell Schick razors. At the time, Jewel's response to that was very simple, telling Today, "I'm here to make my label money." Back then, the quite honest admission that music wasn't just an art, that it was a business, felt sinful. But reading that quote now, it makes total sense.

Fans have become used to the idea of artist's work or persona being used to sell just about anything, for artists to become brand ambassadors or lend their songs to commercials. CD sales didn't pay the bills then, and neither does streaming, which is why artists have tried to find that balance between using one's song in a classy commercial, film, or TV and straight up schilling for the man. Jewel seemed to understand that then, telling Today that the reason her label kept her around was because "I do make them money, and at the same time I try to do that by being an artist and by being a lyricist. Being able to exist like that in this culture is a phenomenon, one I'm always amazed at, one I'm always looking at, one I'm always questioning and examining."

Re-examining Jewel's video for "Intuition" shows that she may have been ahead of the curve when it came to understanding the music business and that selling your music doesn't mean you're selling out. In fact, it's the new normal. Jewel's video was more than just a spoof; it was her chance to go hard on the music industry for treating people as if they're objects to be sold.

Knowing this, though, Jewel still told TRL that "It's my job. If I wanted to not make a living at this, I could just move to Alaska and write songs in a cabin." She knew what she was getting into it, but, for fans who didn't, she was there to help them understand. It's why she said the video "isn't all a spoof, it's not even a parody, it isn't all making fun of it." Jewel was right: "Intuition" was actually a pretty smart and savvy look at what it's like to be a pop star from a tried and true folk singer.