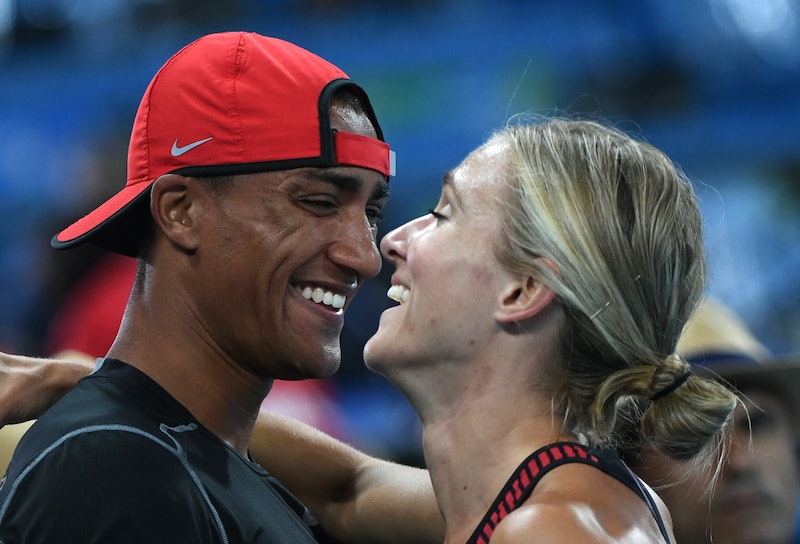 You know what they say: The couple that plays together, stays together. Or, in the case of Ashton Eaton and Brianne Theisen Eaton, the couple that competes against each other stays together. This Olympic power couple has a long history of supporting each other in spite of playing for opposing teams: As they have worked toward the 2016 Rio Olympics in their respective track and field categories, it's clear that they are the Olympic power couple to watch. I mean, just look at these photos of Ashton Eaton and Brianne Theisen Eaton supporting each other in major ways throughout their journey to Olympic glory. It's clear from these shots — and their shared mission of going for gold — that this power couple knows that all things are better when they're with each other.

And with each other, they definitely are better. Both husband and wife have made it successfully to this year's Olympic games, even if they are on different teams. While Eaton competes for his homeland, the U.S.A., Theisen competes for Canada. Even though an international border separates them from competing side-by-side, they are still each other's biggest support systems, and these photos prove it.

When They Were Each Other's Biggest Fans

Because hardly a competition goes by without these two cheering each other on from the side.

When They Were Waiting For Each Other At The Finish Line

Who else would you want to choose first?

When They Supported Each Other In Business Too

When They Talk Each Other Through Strategy

Clearly they respect each other's opinions.

When They Loved PDA

I mean, who doesn't?

When They Gave Each Other Tips

Who knows better than a fellow competitor?

When They Cheered On Their Teams Together

That might be a little awkward, but they still manage to make it happen.

And were the only ones who could talk them down.

When They Practice Together

It's clear from the number of side-by-side sweaty shots that love transcends borders.

When They Had Nothing But Love For Each Other

And you better believe that the two of these lovebirds like to fill their social media walls and newsfeeds with adorable pictures of each other.

Even When Times Were Tough

Maybe the best photos of these two come in the form of seeing them work through the down times, too. You know you've found the right person when they love you when you're up and when you're down, too.

They may compete for different teams, but it's obvious from these adorable photos that Ashton Eaton and Brianne Theison don't let that stand in the way of supporting each other all the way to the finish line.