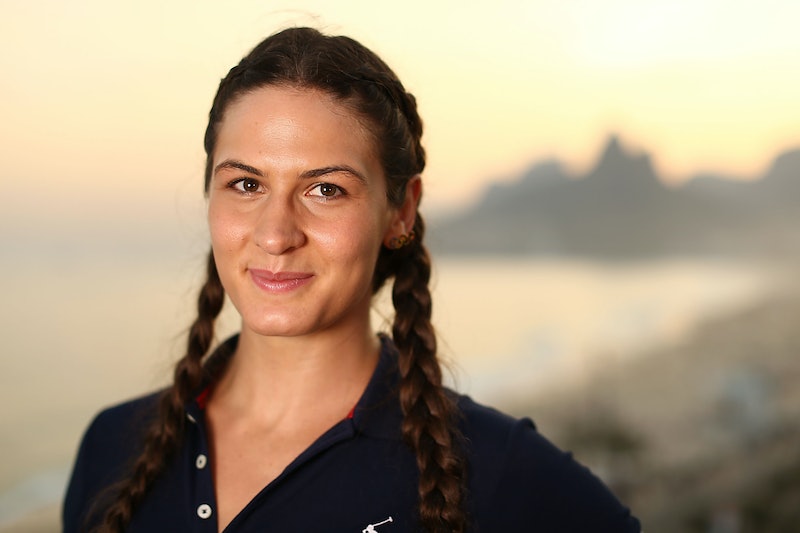 She's already an Olympian, but starting on Thursday, she could become much more. American wrestler Adeline Gray will compete in the first round of women's wrestling matches in Rio for a chance to make history by potentially becoming the first U.S. woman to take home the gold in her sport. With such an important medal on the line and a glass-ceiling-shattering resume already in the books, it's only fitting that Gray will be dressed in Wonder Woman-like gear — quite fitting for the real-life Wonder Woman that she is.

Gray will compete in the women's freestyle 75kg (165 lb.) category of wrestling. It's a sport that is overwhelmingly male-dominated in the U.S., but Gray is undeniably one of the sport's best, and most important athletes. She qualified for the Olympics by winning a bout at the Olympic Trials in a mere matter of 65 seconds. In fact, she hasn't lost a match since 2014. Heading into Thursday's Olympic bout, she has a 38-win streak under her belt and doesn't plan on breaking it anytime soon. It's hard to believe that the star wrestler was an alternate at the last Summer Olympics in London. Now, she's finally taking front stage.

She's not competing for a medal on Thursday — the match will only allow her to advance to the next round — but she's already favored to win the impending gold medal. If she does, she'll be the first American woman to win an Olympic gold medal in wrestling. The historic opportunity is overwhelmingly evident in her Olympic attire, which undeniably looks a lot like something Wonder Woman would wear.

Gray will compete against her fellow female wrestlers in Rio, but she's used to facing male wrestlers — and, in many cases, she's used to beating them. As a young wrestler, she often had to compete on male teams, and, as NBC reported, her male competitors often forfeited when they were put in the uncomfortable position of wrestling a girl. Now, she credits the boys who did wrestle her for some of her success, telling NBC:

Those boys made me better, and I want to thank all the boys out there who stepped on the mat, and had the courage to really wrestle me, because I wouldn't be here without them.

In addition to winning, Gray has made a name for herself in the sport of wrestling by speaking out for the role of women in sports. Whether she wins the gold or competes without scoring medals, Gray is a beacon of hope for the future of women's sports. In other words, she is a superhero.