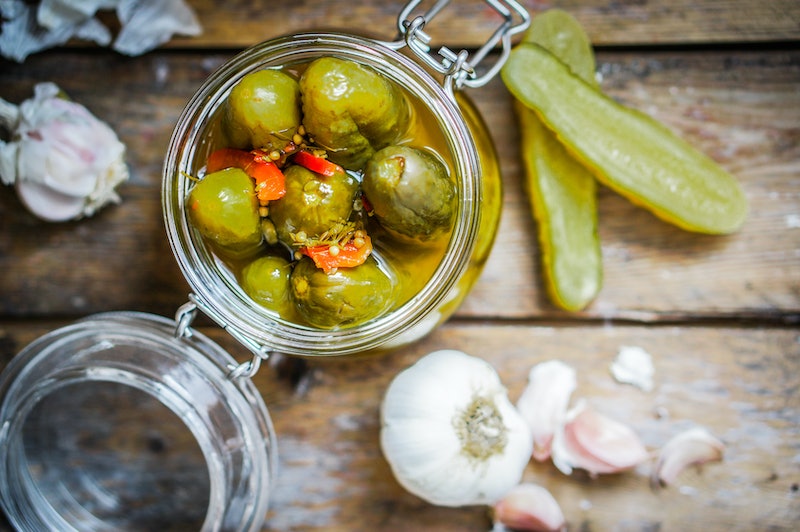 The word "fermentation" often makes us think of rotting things, a.k.a nothing we want to put in our mouths. But some fermented foods are actually incredibly tasty and, even more important, great for your health. When certain vegetables and beverages are left to ferment and break down — through a process during which the food's natural bacteria essentially feed on themselves — they become full of probiotics (good-for-you bacteria), which provide a ton of health benefits.

"Nine out of every 10 cells in your body are the microbes that live in your intestines. They form an ecosystem that is the most important component of your immune system, as well as the major part of your digestive capability," says Jeff Cox, food and wine writer and author of The Essential Book of Fermentation . "When you have a lot of beneficial microbes, which are found in fermented foods, they help keep you healthy and [help] ward off illness." Plus, fermenting foods amplifies their existing nutrients, meaning you get more out of them then when consuming that food raw or cooked, says Pittsburgh-based holistic coach, Jill Ciciarelli, author of Fermented: A Four Season Approach to Paleo Probiotic Foods . Fill your fridge with these six fermentation powerhouses and score some serious health perks.

Yogurt is full of gut-healthy probiotics, says Ciciarelli, and it's more versatile than you might think. "It can be eaten plain or dressed up to be a sweet or savory treat to accompany any meal," she says. And you'll find even more perks if you like to go Greek: Research has found that Greek yogurt can boost mood and potentially reduce anxiety.

Eaten straight out of the jar or in a peanut butter and pickle sandwich, pickles are a great fermented staple. "The lactic acid bacteria in pickles are also prime inhabitants of a healthy human gut so they help foster a healthy intestinal ecosystem," says Cox. Look for pickles in brine, which offer more perks than those steeped in vinegar, he says.

Koreans load up on the this traditional pickled cabbage dish (up to 40 pounds per person each year!), and you should too. "It provides an enormous variety of bacterial strains which are terrific for digestion and gut health. Plus, kimchi is typically a variety of vegetables fermented together which, of course, encourages increased vegetable consumption," says Ciciarelli.

Though it's only now making its debut in some dairy aisles, this milk-based beverage has actually been around for a while. "The culture, which is added to milk, is originally from the Caucasus region of southern Russia and has been supporting health for centuries. In my opinion, it's the champion probiotic drink because it's a mix of over 30 kinds of very beneficial bacteria and yeasts," says Cox. Try a kefir-based smoothie for a filling and healthy breakfast.

This fizzy drink has made a huge splash on the health food scene in recent years. Though some kombucha claims are dubious— there's no proof it cures cancer or detoxifies the body— it does contain a slew of healthy probiotics. "The bacteria and yeast, like the culture in kefir, are beneficial microbes that colonize our intestinal flora," says Cox. If you opt for the store version, skip brands that have added sugar, says Ciciarelli. "Kombucha starts out as an overly sweetened tea and through the fermentation process gets less sweet because the sugar is used by the bacteria and yeast. Many companies add a lot of fruit and sugar to their drinks, which makes them taste great and fruity, but they can have just as much added sugar as a can of Coke," she says.