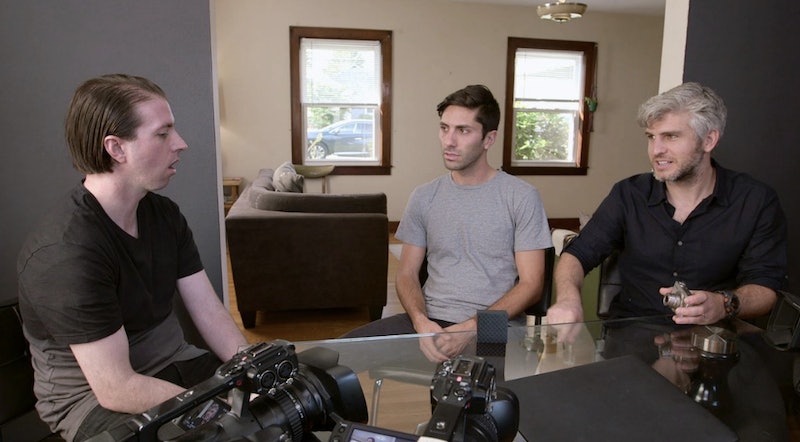 We've seen some truly insane love stories courtesy of Catfish hosts Nev and Max, but none of them have included a major celebrity... until now. And trust me — this one's worth the wait. On Wednesday night's new episode of Catfish , Spencer thinks he's dating Katy Perry after talking to her for six years online, but he can't really have been communicating with the actual "Rise" singer, right? He's serious enough about it that he's already bought her an engagement ring... made with his grandmother's emerald. Yep, this is about to get real.

Obviously, the second Nev and Max got wind of this, they flew to Tennessee to help Spencer solve this mystery. Basically, he's been talking to "Katy" for years with no video evidence to show for it, which is bizarre since we all know Katy Perry has access to plenty of cameras. After a little investigating, Nev and Max realized that "Katy's" e-mail address leads to British Lady Gaga fan named Harriet who's actually super cute. OK, it was never going to be the real Katy Perry, but even so, Spencer was pretty shocked that she could actually be this girl Harriet. Say what you want about the guy, but he's an optimist!

No, like, even after seeing the photos, Spencer thought that Katy had sent him clues through the lyrics in her last album, and Harriett was a ruse. And that made him even more ready to fly to England to potentially propose to her (?!??!), and clearly Nev and Max are not going to say no to an opportunity to take Catfish international. But no sooner do they land across the pond than do they find out from Harriet's ex girlfriend — yes, girlfriend — that she's 100 percent gay. The plot thickens!

After the gang arrived in Gloucester, where Harriet lives, they check into the hotel and get a call from her. She's in the hotel room. Without even having to make contact with her. What?! And shock of all shocks: It's not Katy Perry, it's Harriet — exactly like Nev and Max said. But since Harriet doesn't seem excited to meet Spencer, he's convinced that she's not the person he's been talking about, and this is just another clue that he had to have been talking to the real Katy Perry. WHAT?!

At first, he thought Katy was just punking him because she'd think it was funny — again, WHAT?! — reality finally started to set in and Spencer accepted that he had been talking to Harriet all this time. Talking to Nev and Max, Harriet admitted that she really just wanted Katy's personality when she started that profile at a young age, and liked Spencer because he'd accept her for anything she said to him. And she may not have been the real Katy Perry, but there was a happy ending: Hariett apologized, and Spencer was surprisingly good with the way things turned out.

I'm sure I wasn't the only one hoping for a cameo from the actual Katy Perry and was disappointed, but at least Spencer got the closure he was looking for. That's what this show is all about, right?