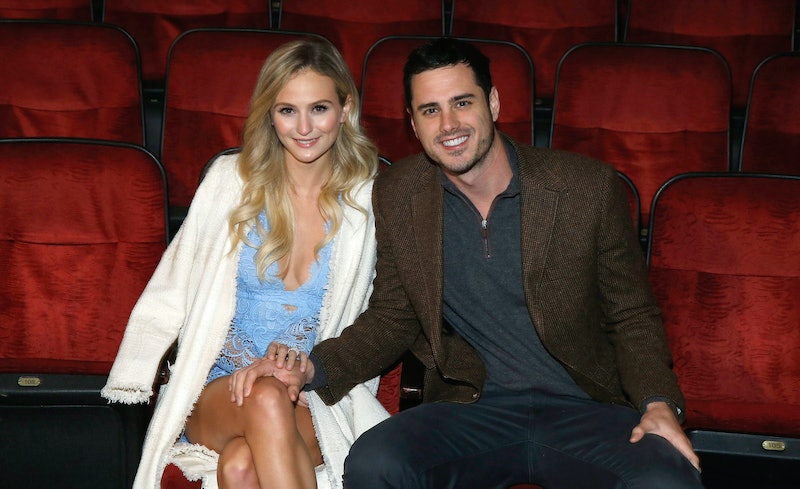 These days, it's rare that you ever have to say goodbye to your favorite Bachelor and Bachelorette stars when they finish their runs on ABC — they seem to stick around TV. For example, recent Bachelor Ben Higgins and fiancé Lauren Bushnell are ready to continue charming audiences in their Freeform spin-off show Ben and Lauren: Happily Ever After?, which will premiere in October. But Ben and Lauren aren't the first Bachelor stars who have made a living off reality TV. While some folks have quit TV, others have found that it's totally their thing and can't stay off the small screen.

Appearing on The Bachelor, The Bachelorette, and Bachelor in Paradise can no doubt raise the profile of regular ol' working people, who become either loved — or not loved — by millions of fans while on any of the shows. Some participants duck out of the spotlight and disappear after it's all over, but some choose to hang around in the limelight and change gears in their careers, continuing to appear on TV and entertain their fans along the way.

Here are some of the Bachelor and Bachelorette stars who have stuck around and made a living on reality TV, according to their IMDB pages.

The former pilot stuck around reality TV after his Bachelor days. He appeared on Bachelor Pad, VH1's Famous Food, The CW's H8R, and Rachael vs. Guy: Celebrity Cook-Off. He even stopped by JoJo Fletcher's season of The Bachelorette.

The farmer competed on Dancing with the Stars and is currently looking into pursuing other farming-related TV projects, according to Racked.

The former Bachelorette has hosted HGTV's Love It or List It Too and W Network's Love it or List it Vancouver and has also appeared on ABC's Extreme Makeover: Home Edition.

Velvick has gone from the Bachelor mansion to the great outdoors — he hosts the Outdoor Channel's Byron Velvick's Guides' Eyes.

The former Bachelor has gone on to appear on Dancing with the Stars, Celebrity Wife Swap, Marriage Boot Camp, Celebrity Family Feud, and Who Wants To Be a Millionaire.

The doctor has taken his talents from The Bachelor to The Doctors, dispensing medical advice on the daytime TV series.

The former Bachelor contestant has competed on Dancing with the Stars, and even starred in her own reality TV series, Melissa and Tye: A New Reality alongside husband Tye Strickland.

You may remember Otis as a contestant from Ben Flajnik’s season and from Bachelor Pad. She went on to star in Married at First Sight.

It was recently revealed that after his stints on Bachelorette and Bachelor in Paradise, Chad would be heading to Ben and Lauren's Freeform show. Why? We'll have to tune in and find out.