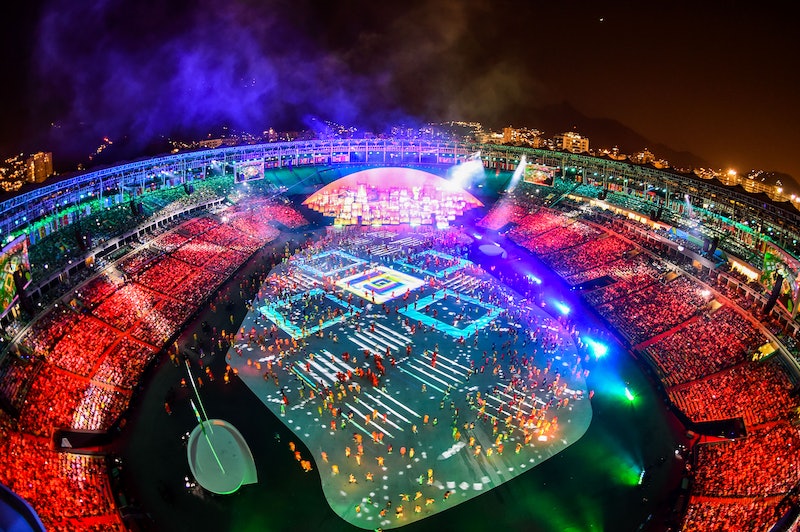 It feels as though the 2016 Rio Olympic Games just began, but time flies when you're having fun (aka watching athletes perform superhuman feats from the comfort of your couch). It was a year full of hard-earned victories and well-deserved medals for Team USA — from the incomparable Simone Biles to a large number of new world records, these athletes deserve major props. It was an especially significant year for women — on day 11 of the games, American women alone had won 41 medals, which is more than many other countries won throughout the entire Olympics, even when you combine male and female medalists. But, all good things must come to an end and the closing ceremony will be televised on Aug. 21. Opening ceremonies are often quite long, so how long is the Rio Olympics Closing Ceremony?

The short answer is that we don't always know how long opening or closing ceremonies will last. According to TV listings, NBC will televise the ceremony from 8:00 p.m. to 10:30 p.m., although the network has slotted in an extra hour just in case it takes longer. If the event falls short of its scheduled duration, we can count on the commentators to complete the time slot with observations about the games and replays of its best moments. Still, there's a lot to cover during the time slot, including performances and the tradition of extinguishing of the Olympic cauldron. And, most symbolically, the Olympic flag will be passed to the mayor of Tokyo, where the 2020 Summer Olympic Games will be held.

Many details of both the opening and closing ceremonies are kept under wraps, but we do know that samba school director, Rosa Magalhaes, is the creative producer for the Closing Ceremony. However, organizers of both ceremonies made clear that their budget will be at least 10 times smaller than the amount of money spent on the 2012 London ceremonies, according to the The Rio Times.

In the same article, award-winning filmmaker Fernando Meirelles made clear that the reason why is important — a country that doesn't currently have a basic sanitation system for all its residents shouldn't overspend on the pomp and circumstance of one evening. Meirelles also noted that, “[w]e can not spend the fortune spent in Beijing or London. We will have high concept not high tech,” indicating that they'll focus on creativity rather than expensive special effects — but that certainly doesn't mean it'll be subpar to the ceremonies we saw in London and Beijing.

Symbolic traditions aside, there will still be time for some iconic guests. Retired Brazilian soccer legend Pelé missed the opening ceremony due to health problems and it was a disappointment to many fans. He recently sent out a tweet that indicates he hopes to attend the Closing Ceremony:

And, according to Billboard, the musical artist Kygo has confirmed that he'll perform during the closing ceremony. He's Norwegian, but his music has a "groovy tropical" vibe that will fit in well in Rio. Between the closing ceremony traditions, the appearances of a soccer legend, at least one exciting musical act, commentators, and some commercials, I think it's safe to estimate that the Closing Ceremony broadcast will last the full two and half hours.