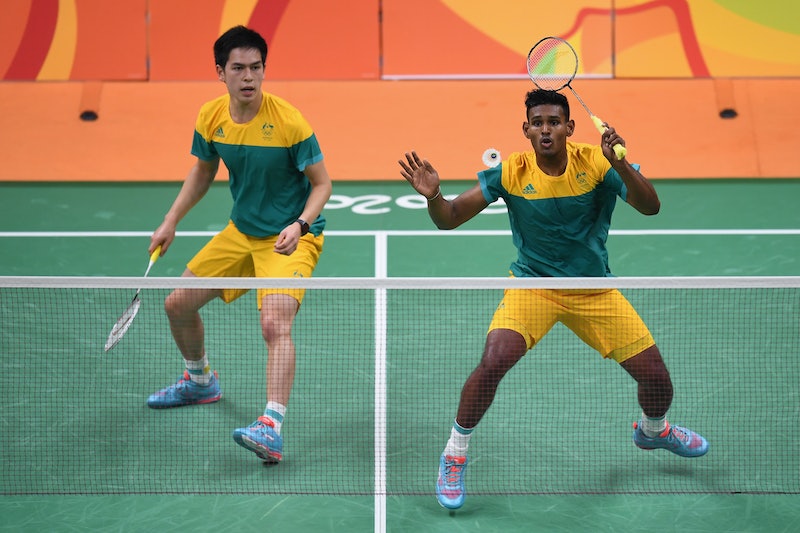 Imagine training for the Olympics. I'm not exactly sure what the regimen for badminton is, but surely there is more to it than my occasional appearance at Body Pump (aka my current workout routine). In any case, for Australian badminton player Sawan Serasinghe, on top of the workouts, practice sets, and gosh knows what else, there were "months of clean eating." But unfortunately for his team, it didn't result in a medal. He and partner Matthew Chau lost to South Korea's team on Saturday. Afterward, he showed us the only way for Serasinghe (or anyone) to celebrate a still-amazing Olympic performance: with loads of McDonald's.

And I mean loads. Judging by the photo that Serasinghe uploaded to his Facebook page, there are at least six sandwiches, six orders of french fries, and four massive orders of chicken nuggets. Plus there's some sort of smoothie and a brownie. If that's not the most massive McDonald's feast you've ever seen, well... I'm impressed. Also, in some sort of ironic juxtaposition, Serasinghe has his T-shirt raised to show off his badminton abs.

But hey, he just competed at the Olympics. And McDonald's is free for all the athletes staying in the Olympic Village — the fast food chain is one of the Games' official sponsors. With Serasinghe's photo upload, he included a message to his fans about his experience at the 2016 Games. He checked in as "grateful" at the Olympic Park, but he sounded a little bummed about the results of his match:

Wow what a week it has been in Rio! Have to say I am disappointed about the match today. We definitely had a good chance to stretch the match to three sets towards the end of the second set but couldn't close it out. We would have loved to end our first Olympic campaign with a win against a much higher ranked pair.

But speaking like a true believer of McDonalds' "I'm loving it" motto, he's still looking with an eye on the future:

Although having said that, there are lots of good things to learn from the matches in the last three days playing against more experienced pairs. Can't wait to go back home to start training and keep on improving! Just want to say thanks again to everyone back home for the on going support. Definitely motivated me to fight hard on court everyday! ❤️ Now it's time to eat some junk food after months of eating clean! 😀

At one point, Michael Phelps claimed to be eating around 12,000 calories before the Beijing games (although he later admitted this might have been a bit of an exaggeration). He tends to go with pasta. After winning gold this time in the 4x100 freestyle, he said, "I think I had a pound of spaghetti, and I am not a spaghetti fan. I forced myself to eat it."

If only McDonald's served spaghetti, Serasinghe could have given him a run for his money.