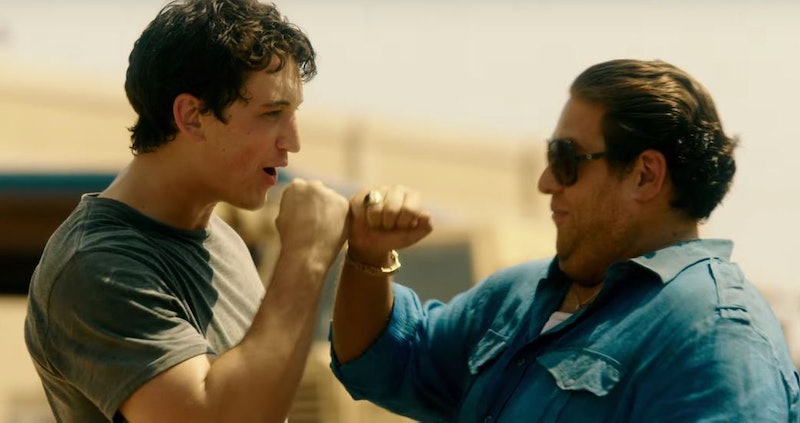 Todd Phillips' new movie War Dogs is based on a story that has been repeatedly referred to as "stranger than fiction," and for good reason. War Dogs, in theaters Aug. 19, revolves around the real-life story of two young kids from Miami who became involved in large-scale arms distribution, including a $300 million dollar contract with the U.S. government during the war in Afghanistan. But how accurate is War Dogs , really? In other based-on-a-true story films, it's easy to write off the most over-the-top moments as being fictional. But with War Dogs, it's actually tough to judge what's fact or fiction given that the true background story is so ridiculous.

Guy Lawson, the journalist who originally dug up the story for an article in Rolling Stone , said that filmmakers captured much of the spirit of the actual events but missed the mark on certain aspects. He told the LA Times , “They got a lot of it in. But you watch the end and you think it's about these [two] guys. It's not. It's about the system." Lawson continued, "There are different forces at work. My job is to create hard-charging, see-through-the-bull ... journalism. And Todd's prime motive is to make a movie." So although the film is true to the story in some ways, in others it is clearly dramatized for the sake of cinema. Here are some elements that are different in the movie than in real life.

The Actors Are Older

The two men in the story, Efraim Diveroli and David Packouz, were in their early 20s when the events portrayed in the film unfolded. However, they are portrayed by Jonah Hill and Miles Teller, who are 32 and 29, respectively.

A third man who was involved in the arms dealings, Alexander Podrizki, appears to be missing from War Dogs ' narrative. Ralph Merrill, who helped finance Diveroli and Packouz's business, does not appear in the film, either.

Some Characters Were Invented

Teller's character has a girlfriend named Iz, played by Ana De Armas, whose anti-war sentiments contrast with those of Packouz. Iz did not exist in real life.

The Action Was Increased

War Dogs reportedly exaggerates the extent to which the two young men were physically in perilous situations abroad. Fandango notes that, "Though Packouz and Diveroli dealt in danger, they mostly did it behind a computer screen."

So although War Dogs is based on true events, filmmakers still took some dramatic license in translating the story into a movie. Regardless, though, the real-life tale is as shocking as its onscreen adaptation.