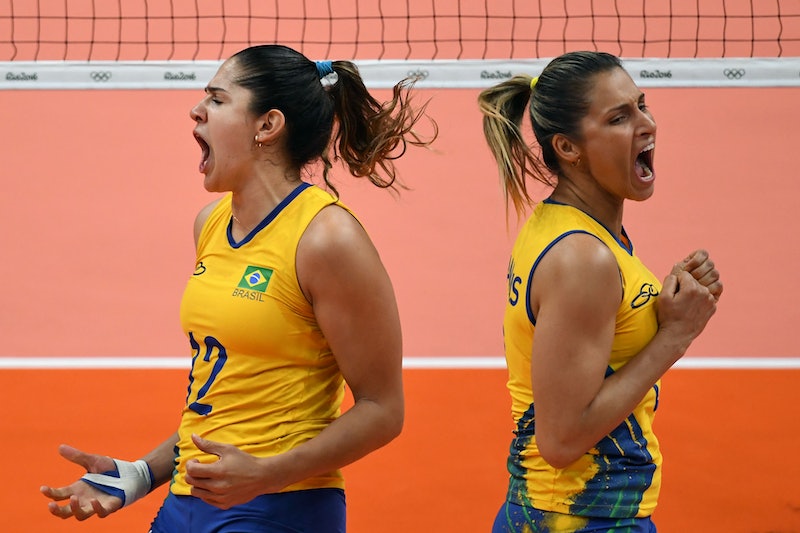 In the last two weeks, the Rio Olympics have given us amazing, jaw-dropping physical feats from both male and female athletes (Hello, Katie Ledecky!). So it might distress you to learn that female Olympians make less money than their male counterparts — a lot less. In a recent video, BuzzFeed outlines the pay inequality that has plagued sports for a long time. Although there are a variety of complex reasons for the pay gap between male and female athletes, that doesn’t make it OK. The video asks a question we should all be asking: Why are female athletes routinely paid less than men — even when they are playing the very same sport?

The gender pay gap exists across a wide spectrum of sports. In March, for example, five players from the U.S. women’s national soccer team — Hope Solo, Carli Lloyd, Megan Rapinoe, Becky Sauerbrunn, and Alex Morgan (all of whom were on the Olympic team this year) — filed suit against the U.S. Soccer Federation for wage discrimination. Although the United States has some of the best female soccer players in the world, they earn less than male players both in the U.S. and abroad. As John Walters explains in Newsweek,

Each player on the [U.S. Women’s National Team] earns $99,000 per year provided the team wins 20 “friendlies” (exhibition matches), the minimum number of matches they would play. By contrast, each men’s player would earn $263,320 for the same feat and would still earn $100,000 if the team lost all 20 games. The women receive no extra pay for playing additional matches above 20, while the men earn anywhere between $5,000 and $17,625 for each match beyond 20.

The discrepancy extends to prize money, too: When the U.S. women’s team won the Women’s World Cup in 2015, they took home $2 million. Not a bad chunk of change, right? But compare that to the German men’s team’s winnings when they brought home the World Cup in 2014: A cool $35 million, more than 17 times the women’s prize.

Many people argue that pay discrepancies have to do with the fact that typically more people tune in for men’s sports. That’s true to a certain extent in soccer — BuzzFeed says that the men’s World Cup had four times as many viewers as the women’s competition. But that’s four times — not 17. (And Newsweek points out that the 2015 Women’s World Cup was actually the most viewed soccer competition in the United States ever, so although more people tuned in for the men’s soccer globally, a lot of Americans — 25.4 million — were indeed watching the women’s match).

Soccer is far from the only sport that has this problem — volleyball, golf, tennis, and basketball run into the same issues as well. Some people might argue that some women’s sports are less popular than the men’s versions, and that they therefore rightly receive less funding, media coverage, and sponsorships. (And it’s a lot less: A 2014 report by the U.K. organization Women In Sport found that women’s sports get only 7 percent of the total media sports coverage in the UK, and only 0.4 percent of sponsorship deals.) But, as Kerry Close at Time points out, that’s a vicious cycle: Women’s sports get low media coverage and few sponsorships, because (supposedly) they aren’t popular, and then of course they’re not popular because they aren’t visible in the media or advertising, and around and around it goes, a self-fulfilling prophecy. Given some of the stunning athletics we’ve seen from women in these Olympics, that’s incredibly frustrating.