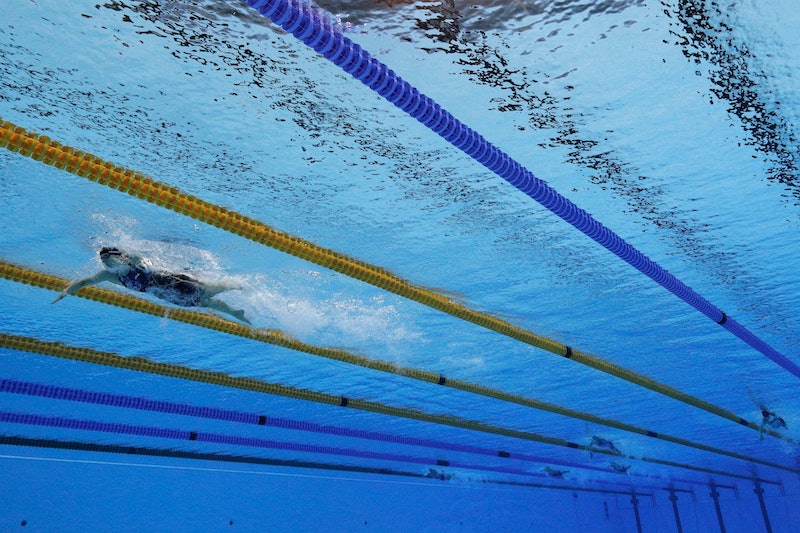 Let's stop talking about Michael Phelps for a bit and focus on the true American hero of the Rio Olympics: Katie Ledecky. The nine-time World Champion swimmer has been dominating the women's freestyle events at the 2016 Summer Olympics, setting Olympic and world records almost every time she dives into the pool. These latest photos of Katie Ledecky during the 800-meter women's freestyle event show just how great this 19-year-old swimmer is — she's basically swimming on her own.

On Friday, Ledecky became the first Olympian since Debbie Meyer in 1968 to win the women's 200-meter, 400-meter, and 800-meter freestyle events. She's now a five-time Olympic gold medalist. But what's most impressive about Ledecky is that she completed those events in record-breaking fashion.

Ledecky finished first in Friday's 800-meter freestyle event, 11 seconds ahead of her nearest competitor. She set a new world record of 8 minutes, 4.79 seconds (she also owned the previous world record, set earlier this year). Her split, at the 400-meter mark, was 4 minutes, 1.98 seconds. It was a ridiculously amazing race to watch, because from certain angles, it looked like Ledecky was swimming in her own private pool. She owned that pool, and all her fellow competitors knew it; on Friday, no one could catch her.

That picture looks like it's spent some time in Photoshop, but it hasn't. It's real. She swam so fast, it looked like everyone just jumped out of the pool and left her on her own.

Ledecky basically spent half of the race swimming in one direction, while her competitors trailed behind, struggling to make each 50-meter flip. Here's some views of the pool taken from other angles during the race.

This wasn't Ledecky's first time at the Summer Olympics. She made her Olympic debut in London in 2012, where at the age of 15, she claimed the gold medal with a time of 8 minutes, 14.63 seconds. It wasn't record-setting, but Ledecky still stunned her competition.

The women's 800-meter freestyle event was Ledecky's final individual event at the Rio Olympics. In addition to completing those three freestyle events, Ledecky took home a silver in the women's 4x100-meter freestyle event, finishing second to the Australian team. Now, the five-time gold medalist can relax, cheer on Team USA, and relish in these astonishing photographs that will live on in Olympic history. Congratulations!