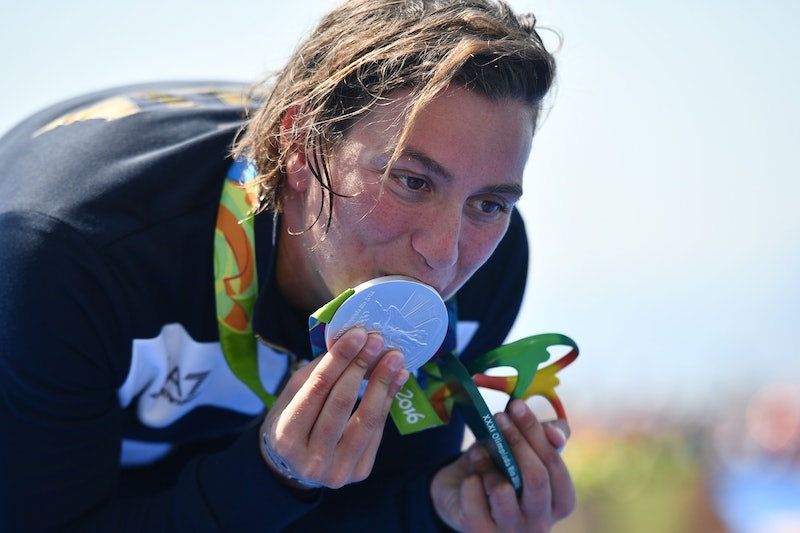 If the way Italian swimmer Rachele Bruni came out unofficially is any indication, Olympians aren't just competing for gold medals; they're also competing for the cutest relationship. Bruni joins dozens of other LGBTQ athletes competing in this year's Olympics, including American basketball player Elena Delle Donne, who came out in a similarly blasé manner earlier this month, and Brazilian ruby player Isadora Cerullo, whose partner publicly proposed on the field where Cerullo had competed days before. I'm not saying the Rio Olympics are the most romantic ever, because I don't have to — the evidence speaks for itself here.

Bruni took silver in the 10 km swimming marathon on Monday, a win that was marked by the disqualification of fellow swimmer Aurélie Muller for pushing Bruni underwater near the finish line. According to Mic, the distance swimmer used the opportunity to dedicate her medal to her family, coach, and most notably, her "beloved." When asked to clarify at the Italian House later, Bruni said she had never been big on officially coming out. "I live for myself, for my passion for swimming and for people who care for me," she said, according to Italian newspaper La Stampa. (It's a rough English translation of the original Italian.)

Of course, this brings up the question of the identity of Bruni's beloved, and according to After Ellen, the swimmer confirmed that she had been referring to her partner, Diletta Faina. Although this is the first time they've publicly referred to their relationship, the couple frequently posts selfies together on Twitter and Instagram. It's important to note that Bruni has not officially "come out" in the traditional sense; she hasn't addressed her sexuality outside of her relationship with Faina. However, she appears to be the only member of Team Italy in a same-sex relationship.

Bruni joins a growing list of openly LGBTQ Olympians at this year's Games; as of this week, the number reached at least 50 athletes. Some have taken the more traditional route of coming out — in 2013, British diver Tom Daley announced he was dating a man in an emotional YouTube video — while others have let their relationships speak for themselves. A handful of athletes are married to their partners, including two field hockey players who are married to each other while playing for Great Britain, while British race walker Tom Bosworth recently proposed to his partner in Rio. No matter how the athletes address their sexuality, the Rio Olympics are an inspiration to LGBTQ viewers around the world.