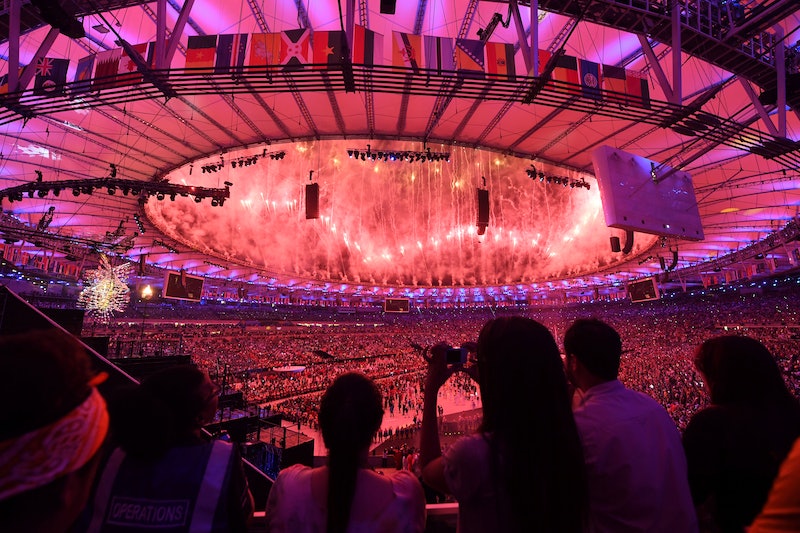 It's about time for the world's most elite athletes to pack it in and disperse from Rio after a thrilling Summer Olympics. Before the 2016 Olympic Games are handed over completely to the history books, there are traditions left to fulfill. An Olympics can't kick off without an Opening Ceremony, nor can it properly end without a Closing Ceremony. Brazil's Maracanã Stadium will be rocking with competitors, families, and fans again at this year's concluding event. NBC will air the Olympics Closing Ceremony on Aug. 21 at 7 p.m. ET, which is great if you have regular cable and are free at that time. But it's 2016 and I know I want my entertainment on demand. So will the 2016 Closing Ceremony be on Hulu?

I'm excited to see what Rio has planned for the Closing Ceremony, but I'm a little sad that this is all coming to an end. Here's what I'll miss the most about the Olympics.

The Final Five, aka Gabby Douglas, Aly Raisman, Simone Biles, Laurie Hernandez, and Madison Kocian, did exactly what they came to do in Rio. They made it to the podium (over and over again ) by wowing the judges with their gravity-defying feats and unimaginable strength. And the world fell in love with their sportsmanship, grace, and glittery eyeliner. They got this.

The Patriotic Fashions Of Boomer Phelps

The only thing better than watching Michael Phelps add piles of medals to his already record-breaking collection is watching his family go wild in the stands whenever he does. But it was his baby son, Boomer, who ran away with the unofficial audience fashion show. Red, white, and blue has never looked so adorable.

Ghostbusters and Saturday Night Live star Leslie Jones became so famous for her passionate and funny Twitter commentary that NBC invited her out to Rio to meet the athletes and watch events live. No one will ever super-fan the Olympics like her.

The internet is not about to let Olympic commentators from any outlet get away with casually sexist comments. From suggesting that a swimmer's coach and husband is the reason for her success to joking that a gymnast is "writing in her diary" instead of tabulating her own beam score, the accomplishments and drive of female athletes were diminished in some coverage. Every offensive joke has been criticized Twitter, so I can only hope that commentators have learned their lesson and will be more conscious in the future.

The Closing Ceremony ought to be an amazing spectacle, but I'm already feeling the Olympics withdrawal.