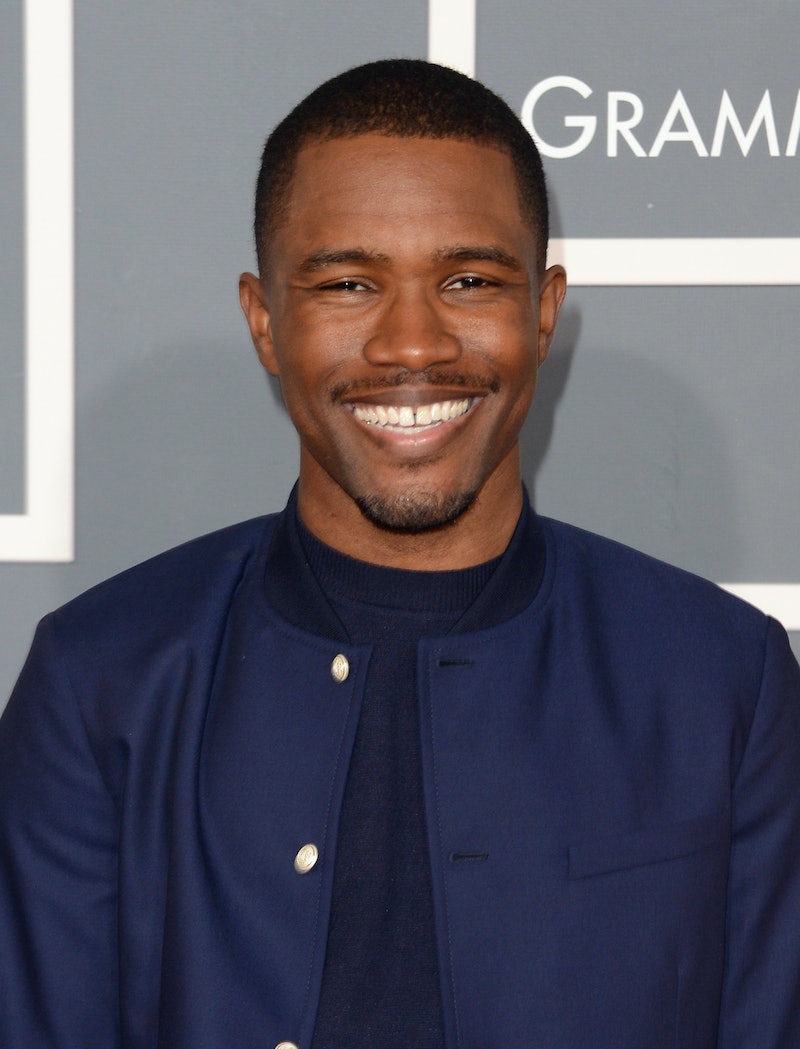 Friday began with what felt like the internet opening up with balloons, trumpets and confetti to deliver something that music fans have waited four years for: a new album from Frank Ocean. Fans have been anticipating the imminent release of Boy's Don't Cry , Ocean's second album, for the past year or so (with repeated disappointments along the way), and late on Thursday night or early Friday morning, fans discovered yet another twist to this tumultuous musical journey. There was still no sign of Boys Don't Cry, but instead there was a pleasant surprise in store — Ocean released a 45-minute visual album called Endless , on Apple Music. Having watched the whole spectacular movie in full, I definitely feel like Ocean has been spending the past four years extremely wisely.

In Endless, Ocean spends 45 minutes building a spiral staircase from scratch. It's a long and arduous process that is nowhere near as straightforward as simply lumping together some slats of wood and hoping for the best. It's also a process that clearly can't be rushed; hurry the process and you risk producing something unstable and inferior, but take your time with it and you can make it near to perfect.

If all of this is sounding eerily familiar, then it's probably because it is. Here, Ocean is clearly using the metaphorical creation of a staircase, and the process of building it, to share an insight on his creative process while making an album. Four years may have seemed like a long time to wait for a second album, but Ocean appears to be making the statement that great art takes time and that it's a worthwhile process to wait for.

He isn't just making any old album (or staircase); he's making something significant and great (like the decision to make a spiral rather than a straight up, vertical set of stairs). As if addressing the concept of Endless directly, the producer of Ocean's 2012 debut, Channel ORANGE, Malay Ho, commented on the delay of Boys Don't Cry, in a Reddit AMA earlier this week:

To be fair, art cannot be rushed. It’s about making sure the perfect aesthetic for the situation has been reached, to do that, takes constant tweaking, trial and error… That goes for any creative [situation]

Quite. The genius of Endless is that it's something of an anti-album. The songs are there, sure, and some of them have glimpses of some of Ocean's best work happening on them, but the tracks are also difficult to access individually within the overall concept of the album. Instead, each song blurs into the next, with the reverb-heavy production spilling from and into each track. It creates an echoing daydream of a track list that genuinely feels endless.

The songs feel deliberate with this production, almost as though they're outtakes from Boys Don't Cry or songs that Ocean has merely played around with in the studio while taking a break from working on his actual album. In that way, it's clear that Endless is merely be a precursor for Boys Don't Cry, especially when you consider that many of Ocean's rumoured collaborators don't feature on it (such as Nas and Lil B or even recent big-name collaborators like Kanye West and Beyoncé).

I'd like to think that Endless is Ocean's way of giving something back to fans while they wait for Boys Don't Cry to be released (rumored to be happening this weekend), and that it's also a thank you note for their patience as well as an explanation as to why the second album has taken so long to make and be released. With this in mind, there's a little more to Ocean's staircase building in Endless that could help to provide some of those explanations.

For starters, the anticipation for Ocean to finish building those damn stairs and finally climb them swells up throughout Endless. By the time we reach that climax, of the stairs being finished, and of Ocean climbing them, it feels short-lived and a little anti-climactic (despite the immersive, powerful soundtrack of the song "Higgs" as it happens). In many ways the process of building those stairs and the anticipation of their creation was greater than the moment where they were completed and climbed.

This feels like something of a statement from Ocean on the nature of his creative process. It's not so much that he might think the creation of his own music is greater than the eventual product, but more so a commentary on the importance of storytelling. Though there will obviously be something of an overall narrative captured within Boy's Don't Cry (one that is mysteriously secret at present), Endless appears to be a story about the creation of that elusive second album. And it may just so happen to be soundtracked by songs which might have been born from the Boy's Don't Cry creative process (but not a part of the eventual album). Ocean even spoke about his love for and the importance of storytelling in a revealing interview with The Guardian in 2012:

I focus on both sonics and story, but music sometimes, just music itself, can turn into more of a maths problem...But storytelling’s a different thing. Like I said, it's the more interesting part about making music for me, or making albums and songs and stuff.

From what I can tell, the final message to fans in Endless is also a deeply encouraging one. Like, why did Ocean choose stairs to build? What's their purpose? Well, you just kind of have to think about their concept in relation to the title. After all, the staircase that Ocean builds might have looked beautiful, but they inevitably led to nowhere. And a staircase with no destination could feasibly go on forever — keep building and building on them and they could truly be endless.

Where does such a musical perfectionist as Ocean draw the line? When can he know that his final album is done? By giving the staircase a very definite finish, of him climbing them triumphantly before they disappear completely from shot, Ocean could well be telling us that Boy's Don't Cry is finished. He's conquered it. It's done, and it's coming soon.

Any other musical artist would have simply taken to Twitter or released a statement to the press in order to apologise to fans over a continually delayed album, but not Ocean. Instead of taking the obvious and most impersonal route, he chose to instead speak directly to fans through his own art. And musically, visually, and artistically, Endless is a triumph, delivered in a manner that is truly heartfelt for fans to experience. But don't call it quits just yet, because this visual-album is simply the opening act. When Boy's Don't Cry finally gets released, it's going to be more than worth the wait.