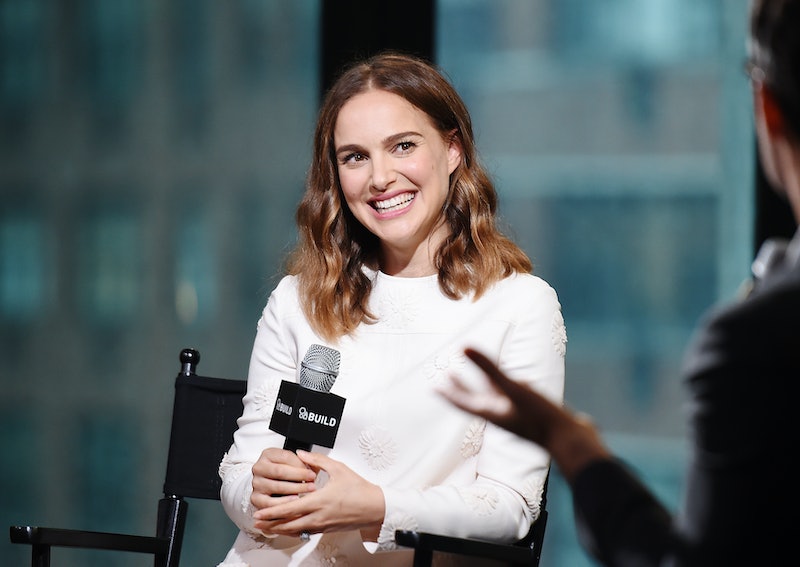 Lena Dunham, how do I love thee? Let me count the ways: you and America Ferrara's speech at the Democratic National Convention was funny and sad and true; Lenny Letter is the best thing to happen to my inbox in 2016; and Girls, somehow, despite having already run for five seasons, just gets better and better. If you think I'm the biggest Lena fangirl in town, actually, I might have some stiff competition: Natalie Portman is inspired by Lena Dunham. The talented actress is currently doing promotion for her directorial debut, A Tale Of Love And Darkness, which explores a young woman's dynamic with her family during the early days of the State of Israel, and she credited Dunham with some serious inspiration in the road that led her here.

Portman recently revealed to Entertainment Weekly that it was thanks to Lena Dunham that she overcame her fear of Hollywood sexism and of her film being dismissed as a vanity project. She describes how the term seems to always be applied to (female) actor-turned-director's films:

I do think the “vanity project” concept is definitely used more against women. I found myself very affected by seeing reviews like that as a kid, growing up, when Barbra Streisand directed The Mirror Has Two Faces. I remember, as a 12-year-old, reading reviews saying it was a “vanity project” and talking about how she lights herself and stuff, and it made me reluctant to try taking on multiple roles on this film. To be a writer, director, and actress, I was like, “Oh my God, they’re going to kill me for this!”

It's hard not to agree with Portman. After all, while the directorial debuts of actors of a similar calibre and place in their career like Ben Affleck or Ryan Gosling are greeted with hushed respect, there's something about a female actor turning to directing that seems to really get Hollywood's goat. For example, although Angelina Jolie's directorial debut Unbroken is widely acknowledged by critics to be good but not great, it doesn't get a "good but not great" score on Rotten Tomatoes. In fact, it gets a pretty depressing one: 52 percent.

And Jolie's just one example. Meg Ryan got an even worse reaction to her 2015 film Ithaca, which hasn't yet been widely rated enough to receive a Rotten Tomato score. Luckily for Portman (and anyone who's a fan of female led filmmaking), she found inspiration in Dunham's competence in all fields:

I remember seeing Tiny Furniture, Lena Dunham’s film, and when the credits rolled I started crying because it was written by Lena Dunham, starring Lena Dunham, produced by Lena Dunham, and directed by Lena Dunham. This young woman has no fear of [saying] “I did it, I did all of this.” And it was so good. It inspired me to not be afraid of that [criticism], and I do think the “vanity project” thing can go in the bossy pile of words that are used more unfairly against women than men.

Dunham was just twenty-four when Tiny Furniture came out and won Best Narrative Feature at SXSW that year. The idea of such a young woman doing literally everything on her first production makes you think, well, sexism be damned. Go take what you want, aspiring filmmaking women of the world. And it's genuinely important that more women start feeling like that: according to a 2016 report by the Study of Women In Television and Film at San Diego state university, female directors made up just 9 percent of the directors for the top 250 grossing films. That's not a slight imbalance, but a major minority, and you don't need me to tell you that it's incredibly depressing that we're still at these figures in 2016.

So take a leaf out of Portman's book and queue up Tiny Furniture tonight. Whether you're an aspiring female filmmaker or not, we should all be doing our part to support more female led film for a less gender divided entertainment future.