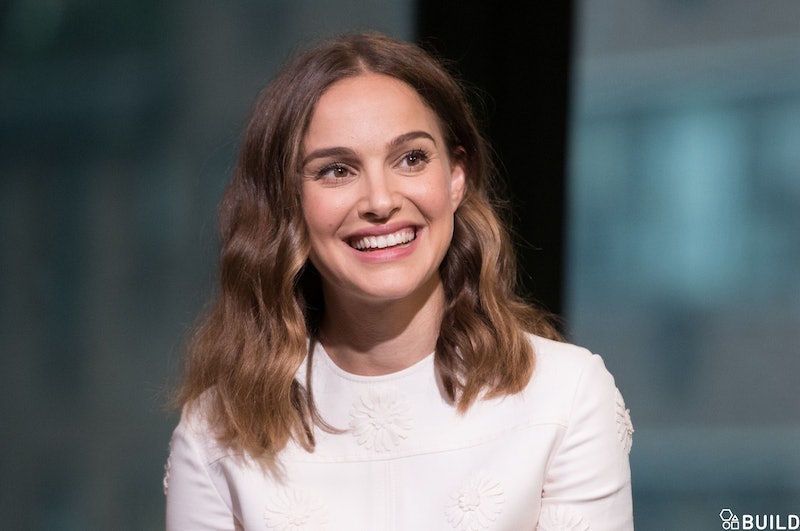 It isn't every Thursday that you get to hang out (indirectly) with Natalie Portman for a half an hour or so, but let me tell you, it's an especially good Thursday when you do. On Aug. 18, Portman sat down with AOL Build to discuss her new film, A Tale of Love and Darkness, which she stars in and also directs. While the talk centered around the actor's majorly major directorial debut (and, why shouldn't it?) interestingly enough, it wasn't so much the conversation about being a new director that struck me, but rather her words about being a female director, and how overseas, where this movie was filmed, being a woman director is treated much differently.

"We've been talking a lot about how there's not enough female directors here [in the U.S.]," Portman says. She explains that due to living in France "for the last couple of years for my husband's work," she's noticed that in the country "almost the entire young generation of directors is female." Portman explains that the cultural difference was "mystifying" to her, but likens it in part to the fact that France affords career women better opportunities in the way of "cheaper and easier [child]care."

The Thor alum doesn't think that's the only difference, though. There's something much more deeply ingrained in French society that she recalls through Jill Soloway's words about how "directing is very much about desire." Portman says that directing means "you're saying, 'I want' a thousand times a day." As for why that affects women, specifically, she says,

"In the United States there's sort of a cultural, like, unease [regarding women] with desire for food, for sex, for anything. And, in France, that is definitely different, it's a pleasure society. It's very much celebrated for a woman to be sexually desiring and desiring good food, wine, etcetera ... I'm paraphrasing poorly from Soloway and stealing from her, but that seemed very convincing to me about why their could be this French and American difference."

It makes perfect sense to me, as a woman, who, for the better part of her life, has been called "bossy" simply because I am forthcoming about my wants, needs, and dislikes. As the ever-wise Amy Poehler iconically said in her book, Yes, Please, "I love bossy women. Some people hate the word, and I understand how 'bossy' can seem like a sh*tty way to describe a woman with a determined point of view, but for me, a bossy woman is someone to search out and to celebrate." What Portman's saying, like Poehler, is that we don't celebrate "bossy women" in the U.S. At least, not enough.

The actor and director does note that France isn't exempt from sexism. In fact, she says that it's perhaps even more prominent there, at least when it comes to being openly critical about a woman's physical appearance. It's just that the country does celebrate bossy women. It embraces them. As she notes, it's "comfortable" with them:

"I don't think it's less sexist, but there is something about female desire, which is related to directing, that... seems like it influences why there's this amazing generation of female directors there, and we're really trickling our directors out."

But if Portman's foray into directing is any indication, I have hope of change for the better in the U.S. Even in a clip of A Tale of Love and Darkness, a film based, as IMDb explains, on "The story of [writer Amos Oz's] youth, set against the backdrop of the end of the British Mandate for Palestine and the early years of the State of Israel," her talent shines through, and it'd be hard for anyone to ignore that kind of work, male or female.

France isn't the only place where Portman experienced better treatment of women in power. A Tale of Love in Darkness was filmed in Israel, and she said of her time directing there,

"I felt like it was a really special place to be a female director, not that I've experienced being a female director on a feature here. But because everybody goes to the military there, both men and women, they're all used to having a female commander or boss at some point, and so I never felt that there was a moment of weirdness if I asked someone to do something, I never had a moment of like, 'I'm not listening to you, you're a small woman.'"

Hearing how differently women directors, and women in power, are received overseas versus in the U.S. is disheartening, but at the same time, it's hopeful. Portman did note a change, however slow, in the gender shift of directors here in the states. And by virtue of shining a light on the distinct juxtaposition between foreign female directors and domestic ones, Portman has already galvanized it in a way. She says that A Tale of Love and Darkness isn't "political," but it is radical. Radical in the conversation that it's already been able to bring about. And that's quite a mark to make with your first film as a shiny, new female director.