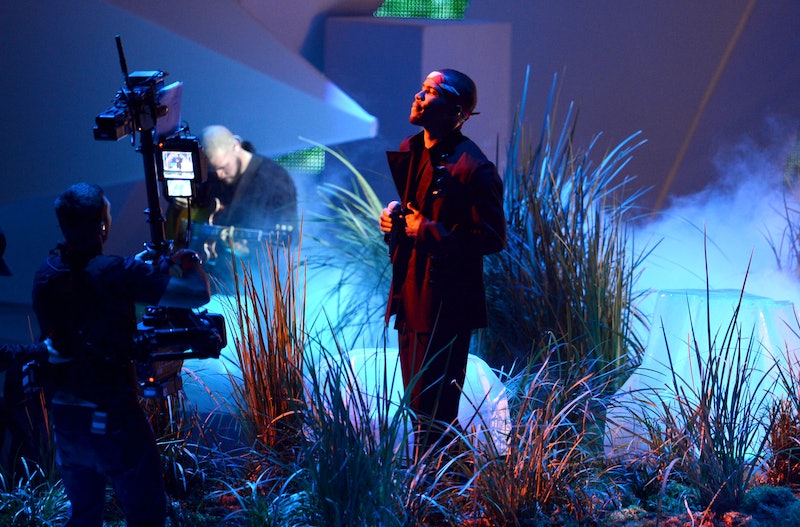 It's a new morning in the world of music. After over a year of anticipation, Frank Ocean released a visual album, Endless , which is... something. It's not the highly anticipated follow-up to 2012's stellar Channel Orange that fans were expecting, promoted for the past year as a project by the name of Boys Don't Cry, although that album may also be released this weekend. Frank Ocean has proven to be one of the most enigmatic, unpredictable artists in pop music, but when you're this good at crafting songs, you get a pass to do whatever you want — even if what you want to do is release a single 45-minute video of yourself building a staircase set to music. Now that Endless has released, fans have spent their time since the release working on decoding the visual album and trying to determine what Frank Ocean is trying to say — which, ironically, is kind of the meaning of Endless.

Frank Ocean rose to fame because of his amazing musical abilities, but also for serving as something of an anomaly in the worlds of hip-hop and R&B. Though Ocean has decided not to specifically label his sexual orientation, in 2012 he wrote a moving Tumblr post about a male friend who was his first love, which put him in the spotlight since high-profile LGBTQ artists are rare in those musical genres. Ocean's sexual orientation has gotten mixed reception from contemporaries in his genre — Some rappers, R&B, and hip-hop musicians are avid supporters of Ocean, but there are others who reportedly avoid working with him because of his sexual orientation, according to an interview between T-Pain and D.J. Vlad. "I don't think Urban music is getting more gay friendly," T-Pain said. "If that was the case, Frank Ocean would be on a lot more songs ... I know [people] who will not do a song with Frank Ocean just because he's gay.

Again, Ocean hasn't labeled his own sexual orientation, but Endless does seem to be an artistic statement about his life so far, with references to how others view him as an LGBTQ black man in 2016 littered throughout the album, shrouded in the dream-like textures and lyrics of the music.

After the Orlando Pulse tragedy, Frank Ocean took to his Tumblr page to craft a personal message of hope and heartbreak.

Many hate us and wish we didn’t exist. Many are annoyed by our wanting to be married like everyone else or use the correct restroom like everyone else. Many don’t see anything wrong with passing down the same old values that send thousands of kids into suicidal depression each year. So we say pride and we express love for who and what we are. Because who else will in earnest?

Ocean expresses his pride all over Endless, but he does so by not drawing attention to it. Ocean's nuanced approach to his own sexuality, never feeling the need to explain himself, helped make tracks like "Forrest Gump" and "Bad Religion" on Channel Orange so popular. He continues this trend on Endless, with some tracks that hint at a female love interest ("Wither") and others that feature a male love interest ("Comme Des Garçons," "U-N-I-T-Y"). One track, "Slide On Me," details his relationship with a man who spends his time playing pick-up basketball while Ocean is "all day running numbers" in fear of "Too many hands waitin' for my downfall ... Boys in the hood'll give me updates like they know the weather."

The song's subject is a relationship and the conflict that arises when one person works too hard while the other seeks joy and relaxation over ambition. It's a universal conflict that Ocean merely paints a gay relationship over, daring to make it accessible to those who still view the concept of two men in love as alien.

Ocean has famously managed to go off the grid, with Twitter and social media exploding whenever he makes a fleeting appearance on a Kanye West album or being featured in a Calvin Klein ad. However, no matter how far off the grid he goes, in a society that is constantly monitoring people through social media, Ocean, as a pop musician, is expected to be at the whim of others — yet he refuses to let that demand control his life.

He's a black man in a world where police violence grows increasingly rampant, and he's an LGBTQ man in a world where gunmen slaughter innocent civilians for being part of that community. Ocean lives in a world where men that look like him and love like him are told that they are lesser than. But, he rebels against this notion by writing songs that are political in how un-political they are, because the bravest thing that someone in Ocean's position can do is simply dare to be. To be black and proud, to be LGBTQ and unwavering in who he allows himself to love. On "Wither," Frank Ocean sings to all the eyes that he imagines are on him, and what he hopes they see.

Endless is bookended with the track "Device Control," which contains these lyrics:

With this Apple appliance, you can capture live videosStill motion pictures shot at high frequency...You can still stream you lifeYour life can be streamedIn endless communicationWe all show interest in every body's life

While there's a chance that Endless may end up being be nothing more than a high-profile Apple Music ad, the song combined with Frank Ocean's livestream approach to promoting the album enforces the idea that Ocean is playing both the witness and witnessed. While Ocean served as a storyteller on Channel Orange, focusing on the lives of others, Endless is an extremely personal, inward-looking album. Since the success of Channel Orange, fans and media have sought to sculpt his personality and define what Frank Ocean, specifically in reference to his sexuality and his race, means to them.

As Ocean climbs the spiral staircase at the end of Endless, he's suddenly cut off with a flash of pink, and the film starts where it begins, with Frank Oceans in an empty warehouse. No matter how much art he creates, he may never be able to climb above other people's perceptions of him. Constructing and climbing that spiral staircase may prove to be an endless, Sisyphean task. But with promises of another album coming out the same weekend as Endless, it's clear that Frank Ocean is far from finished letting the whole world know just who he really is. And, these Endless lyrical bookends remind the audience that no matter how many nice 4K high-definition screens others try to view him on, there is only one man who can define what Frank Ocean is — himself.