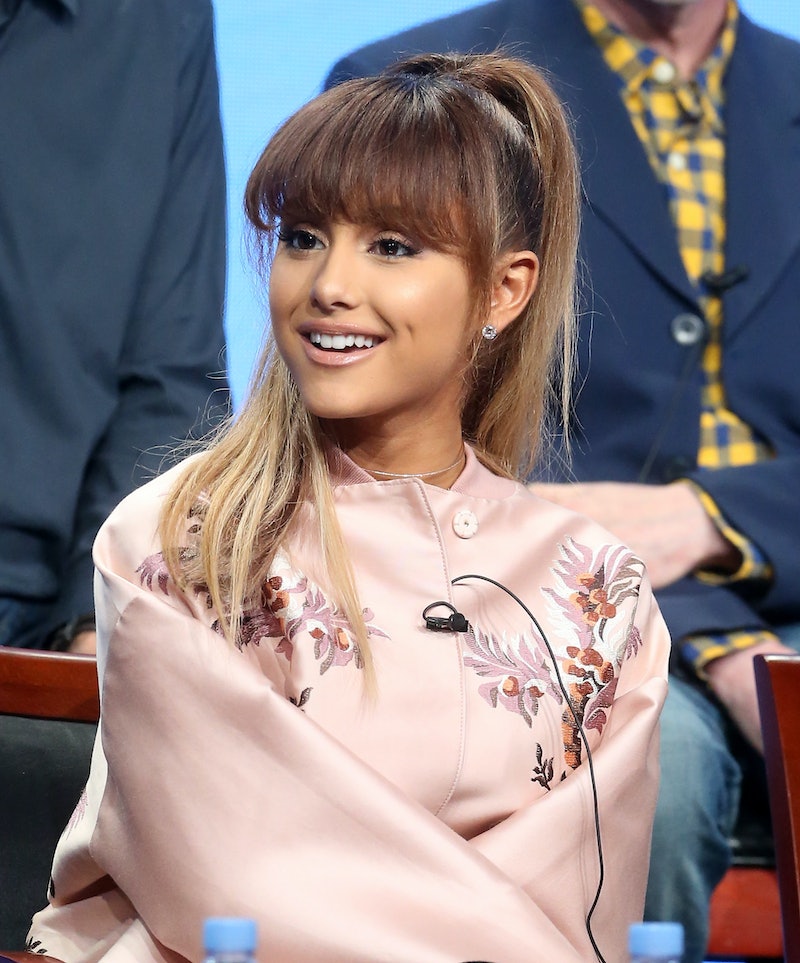 The announcement earlier this year that Ariana Grande would play the pigtailed Penny Pingleton in NBC's live version of Hairspray seemed like a no-brainer. Now that the teaser has shown the first picture of Ariana Grande as Penny in Hairspray Live!, it's clear that she's perfect for the role. Grande had previously posted Snapchat teasers of her pigtailed look, but this is the first time we've seen her in full costume.

The first promo, which was released on Friday, shows the cast members in this new adaptation of the 1988 musical decked out in their '60s finest. In the promo, Grande wears Penny's signature pigtails with bangs as her hairstyle. She's also wearing a stylish plaid schoolgirl outfit over a white blouse and some very white tennis shoes. If you remember Penny's background from other versions of the musical, she is constantly rebelling against her strict, Puritanical mother (who will be played by Andrea Martin in this version). Penny's flirty schoolgirl look makes sense for someone who's trying to appease her mom and also look cute.

Hairspray Live! follows in the footsteps of NBC's live musicals, which include The Sound of Music Live! and The Wiz Live! In addition to Grande, it's got a super exciting cast featuring Jennifer Hudson, Martin Short, and Kristin Chenoweth. Newcomer Maddie Baillio will play the lead role of Tracy Turnblad.

At a Hairspray panel at NBC's Summer Press Tour in early August, Grande described how excited she was to get the chance to play Penny. "I never thought it would actually happen," she said. "It's kind of surreal for me to even be a part of this. I'm so grateful." Before she was a pop star, Grande acted on Broadway, and she revealed that she prefers the theatrical life. "This is such a dream come true for me because at heart, theater is everything to me. Pop music is so fun, but this is way much more fun. So much more."

Grande follows in the footsteps of Leslie Ann Powers, who played Penny in the original 1988 movie, and Amanda Bynes, who portrayed her in the 2007 remake. While an iconic character, Penny is a supporting role and doesn't have a song of her own, and Grande revealed that she wouldn't be given a song just because she has the vocal chops to pull it off. She's certainly able to do the part justice, but we'll have to wait until the musical debuts live on NBC on Dec. 7 to see for ourselves.

More like this
Taylor Swift Calls Dwayne Johnson "The Man" After Revealing New "Taylor's Version" Song
By Jake Viswanath
Taylor Swift & Her Mom Clap Back Against The “Shake It Off” Plagiarism Lawsuit
By Jake Viswanath
Taylor Swift’s Reported Private Jet Use & Carbon Footprint Set Twitter Ablaze
By Stephanie Topacio Long
What Is Ben Affleck's Net Worth? At 50, The Oscar Winner Makes 8 Figures Per Film
By Meg Walters
Get Even More From Bustle — Sign Up For The Newsletter