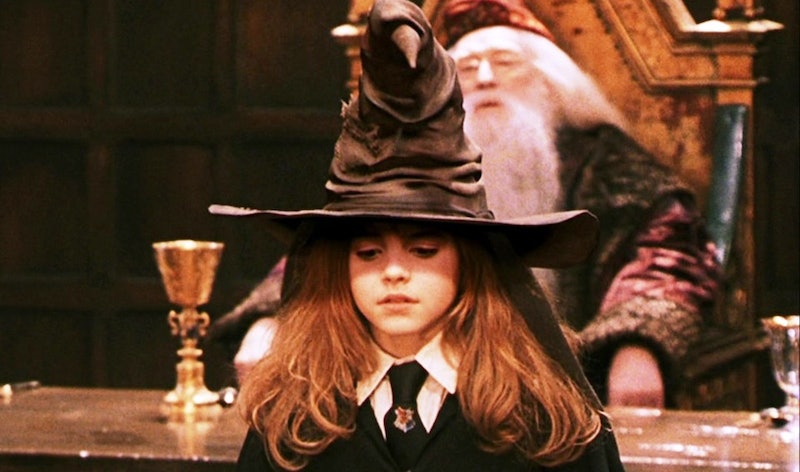 There are plenty of wise characters in the Harry Potter series. Of course, there's Headmaster Dumbledore with his brand of mischievous wisdom. There's Professor McGonagall with her no-nonsense approach to things. There's Hermione Granger, with her plucky intelligence and sassy (but useful) one-liners. There's Sirius Black, whose heart is always in the right place — even if his head isn't. There are countless others who contributed their wisdom to Harry's journey: Mr. and Mrs. Weasley, Hagrid, Lupin, Snape, Dobby, and more.

But too often, we forget about the wisest character of all in the Harry Potter series: the Sorting Hat. The Sorting Hat is more than a means to an end. The Sorting Hat has spent its life peering into the heads of millions, and in the process, it has amassed more wisdom than Dumbledore, McGonagall, Hermione, Sirius, and the others combined. To quote Joey Tribbiani from Friends, the Sorting Hat is pretty 'wisdomous.'

Are you afraid of what you'll hear?

Not Slytherin! Not Gryffindor!

Not Hufflepuff! Not Ravenclaw!

The Sorting Hat is probably the wisest character in the Harry Potter universe, but even all-knowing wizard hats can get it wrong sometimes. Wise it may be; infallible it is not. But the Hat unfailingly stands by its decisions to sort students into certain houses, maintaining that someone can be in Slytherin and still be altruistic, and Ravenclaws can flunk all their tests, too!

2. There is strength in unity.

And we must unite inside her

or we'll crumble from within

I have told you, I have warned you...

Division and dissent are a foe's best weapons. Because when a facade crumbles from within, nothing can save it. Presenting a united front is important — and not just in battles.

3. Don't be fooled by appearances.

The Sorting Hat may not be easy on the eyes, but it enjoys far greater privileges and respect than the poshest of bowler hats and is held in awe by the generations of students who pass through Hogwarts. Just goes to show, that it's what's on the inside that matters (with hats — and the people underneath them.)

4. It is our choices that truly define us.

Granted, it was Dumbledore who first said this in the books, but it is the Sorting Hat that has truly embodied and reinforced the wisdom of these words, by allowing Harry to be in the house he wished to, rather than the one he seemed born for. In choosing to judge a person by his choices, rather than his innate nature and abilities, the Hat set in motion a series of events that had far-reaching consequences for wizard-kind.

5. Important as it is to be humble, it is just as important to be confident and believe in yourself.

I've done this job for centuries

On every student's head I've sat

Of thoughts I take inventories

For I'm the famous Sorting Hat.

The Sorting Hat has never been low on confidence and has steadfastly, sometimes even stubbornly, stood by its decisions. Admittedly, there aren’t many occasions when the Hat has faltered, but what is more important than making the right decisions, is believing in the ones you have made.

6. You can be whatever you want.

If Sirius could hail from a family of fanatic blood-purists and turn out to be the person he was, and if Harry could be in Gryffindor despite having a shard of Voldemort's soul in him, then is there anything stopping us from what we want to be? The Hat reinforced the idea that we are who we choose to be.

7. There are similarities between each house.

There is bravery in ambition, wisdom in humility, and recklessness in bravery. No house is perfect, yet each embodies the virtues of others. J.K. Rowling has shown us, time and again, that Slytherins can be brave, Hufflepuffs can be smart, and that sometimes, even Gryffindors can be rats — quite literally!

8. You might do your duty grudgingly, bitterly, but do it nevertheless.

Though I must fulfill my duty

and must quarter every year

still I wonder whether sorting

may not bring the end I fear.

The Sorting Hat has never approved of what it calls "quartering" of students and has always bemoaned the need for Sorting. It maintains that Sorting just breeds dissension and that Hogwarts would be better off united. However, disapproving or not, year in and year out, the Hat has done its duty. Staunchly, unfailingly, and impeccably.

9. You don't need hands, or even a body, to achieve greatness.

So put me on! Don't be afraid!

And don't get in a flap!

You're in safe hands (though I have none)

For I'm a Thinking Cap!

Disabilities needn't stop us from achieving our dreams. If the Hat could be remembered for generations, despite not ever having a body, then anyone can achieve greatness. Just never give up!

More like this
I've Read The Harry Potter Books 30+ Times & This Plot Hole Haunts Me
By Kelsey Stiegman
The 'House Of The Dragon' Showrunners Revealed One Key Similarity With 'GoT'
By Grace Wehniainen and Kadin Burnett
'The Sandman’s Ending Is A Departure From Neil Gaiman’s Comic Book Series
By Kadin Burnett
50 Books To Read With Your Book Club
By K.W. Colyard
Get Even More From Bustle — Sign Up For The Newsletter