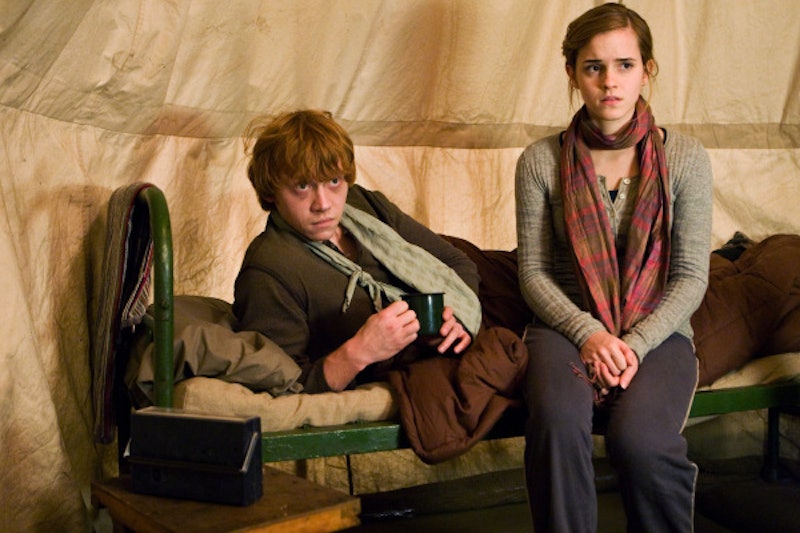 I've mentioned in the past that I think Harry Potter is the worst. How many dangerous situations has he found himself in that could have been avoided if he just took a moment to stop and think (*cough* Department of Mysteries *cough* Sirius Black)? I'm not saying that we have to completely strip his "hero" title from him, but I do think we should do ourselves a favor and pay some attention to the other characters in the book who have had their own hero moments.

While there have been a ton of characters who have stepped up to save the day throughout the series, the ten characters below are either consistently challenging Harry for hero status or have done something so heroic that deserves a mention. Most importantly, though, they're characters that don't get recognized as heroes as often. Notice that Dumbledore and Sirius Black haven't made the list. We know that Dumbledore is awesome, and Sirius is a badass. That's old news. But what about Ron? Or Luna? What about Dobby?

Instead of praising Harry or Dumbledore again, let's give some credit to the unsung heroes of the Harry Potter series. They deserve a round of applause.

Let's all take a minute and acknowledge that Hermione is the hero of the series. We should just rename the series Hermione Granger & The Time She Literally Saved Everyone For Like Seven Years Straight. Want to know what kind of monster is attacking students and how to protect yourself from it? Ask Hermione. Want to learn how to perform a spell that will save your life? Ask Hermione. Want to befriend someone who is so good at magic that she will continuously make up for your incompetence and keep you alive for seven years? For god's sake, just ask Hermione. Are you seeing a pattern start to emerge? All praise Hermione Granger, the true unsung hero of Hogwarts.

We spend most of the series hating Snape because he's kind of a big jerk to everyone for most of the series. Oh, and he also kills Dumbledore and appears to be working for Lord Voldemort. He seems to be a pretty cut-and-dry bad guy until Deathly Hallows, when we find out he's secretly been risking his life to keep Harry safe and help bring down Voldemort. What's most heroic about Snape in my opinion is that he's willing to risk his entire reputation to play his role in Dumbledore's schemes, even though he knows he'll be hated for it. He knows he'll probably never get any credit for his actions (he dies before his name can be cleared), but he does them because it's the only way he can redeem himself for his past crimes.

In early novels, Neville is a bit of a joke: he's forgetful, barely passing most of his classes, and is the embarrassment of his family. But as the series progresses, we get to watch Neville slowly build up his confidence, becoming not only a better wizard but one of the bravest and most loyal friends Harry has at Hogwarts. By the time he comes through a painting into the Hog's Head in Deathly Hallows, we shouldn't be surprised that he's become the badass leader of a rebellion. It's totally fitting that Neville should be the one to draw the Sword of Gryffindor out of the sorting hat and destroy the last Horcrux, because he deserved to have his moment in the spotlight.

Poor Ron spends most of the books living in Harry's shadow, a fact that becomes a major point of contention at various times throughout the series. Sometimes he can seem like a jealous twit, but let's try to see things from Ron's point of view. He feels forgotten in a large family full of well-liked and pretty successful siblings, and just when he thinks he can make a name for himself he befriends the most famous person in the wizarding world. No wonder he has an inferiority complex. Instead of letting these feelings overwhelm him, however, he pulls himself together and risks his life going along with whatever half-baked plan Harry comes up with. He spends seven years putting himself in near constant danger for his best friend, and he deserves a lot of credit for that.

Admittedly, most of Dobby's attempts at heroics don't end particularly well, and result in Harry getting into trouble and Dobby hitting himself over the head. But the little guy means well, and you can't doubt his devotion to helping Harry. I'm not sure there's a character in the entire series that loves Harry the way Dobby does. Think about it: Dobby is a slave who risks incredible punishment at the hands of his abusive master, just to try to keep a boy he's never met safe. In the end, Dobby sacrifices himself to save his beloved Harry Potter, dying in his arms as he utters his name. Cut to me sobbing hysterically every time I read this scene.

Hagrid is a hero from the moment we meet him in Sorcerer's Stone. Riding a giant flying motorbike, he hand delivers baby Harry from the wreckage of his home to the relative safety of the Dursley household. Then, a decade later, he appears again to rescue Harry from his miserable life with one of the best moments of the book, "Yer a wizard, Harry." And that's just in the first third of the first book! Hagrid may be a little rough around the edges and doesn't always make the best judgment calls (remember Norbert, Aragog, etc.) but he's got a good heart and, most importantly, loves Harry as if he were his own son. And he also does a bunch of cool, brave stuff like facing down a bunch of angry giants just because Dumbledore asks him to.

Sometimes McGonagall gets lost in Dumbledore's shadow. But we all need to stop sleeping on Minverva McGonagall, who proves time and time again that she's a badass witch in her own right. As deputy headmistress, she's in charge of making sure Hogwarts stays in one piece whenever Dumbledore decides to go off on some kind of secret, important mission. She's not afraid to stand up to any malevolent outsider who tries to take over the school (see Dolores Umbridge, the Death Eaters), and if things start to get real you definitely want her on your side in a fight. Her duel with Snape in Deathly Hallows should be enough to convince you that McGonagall doesn't get the credit she deserves for most of the series.

While in the first few novels we see them solely in the context of being the heads of the Weasley family, we later learn that Molly and Arthur are actually some of the toughest characters in the novels. After leaving Hogwarts, Molly and Arthur eloped and teamed up with the Order of the Phoenix to fight Voldemort and his Death Eaters, watching many of their friends die for the cause. Years later, they joined the rebellion again. We think of Molly as a maternal (if a little scary) character mostly interested in cooking for and cleaning up after her family, and Arthur as a dotty wizard obsessed with spark plugs. In reality, though, they're hardened rebels who fight Voldemort not once but twice.

We all make such a big deal about Harry and Hermione getting involved in some wibbly-wobbly-timey-whimey stuff and rescuing Sirius Black that we forget about the real hero of Prisoner of Azkaban: Buckbeak the hippogriff. Let's recap. This terrifying, giant horse-eagle messes up Malfoy, gets sentenced to death, in an alternate time line actually dies, is freed by time-hopping Harry and Hermione, and eventually flies Sirius away to safety. This hippogriff is a badass, and without him Sirius would be dementor-bait. And he doesn't just fly Sirius out of Hogwarts and leave him on the side of the road somewhere. No, the brave Buckbeak then goes on the lam with his new partner in crime, probably getting into all kinds of shenanigans.

What's amazing about Luna is that it's not entirely clear why she ever gets involved with the struggle against Voldemort to begin with. She's not in Gryffindor, so it's not like she's friendly with Harry and the gang from the beginning, and her equally loony father doesn't seem to have deep ties to the original Order of the Phoenix. She just decides that she really likes Harry and his friends, drifts her way into Dumbledore's Army and finds herself breaking into the Department of Mysteries and getting kidnapped and tortured by Death Eaters, among other adventures. She faces evil wizards and cruel classmates and never seems to lose her cool.