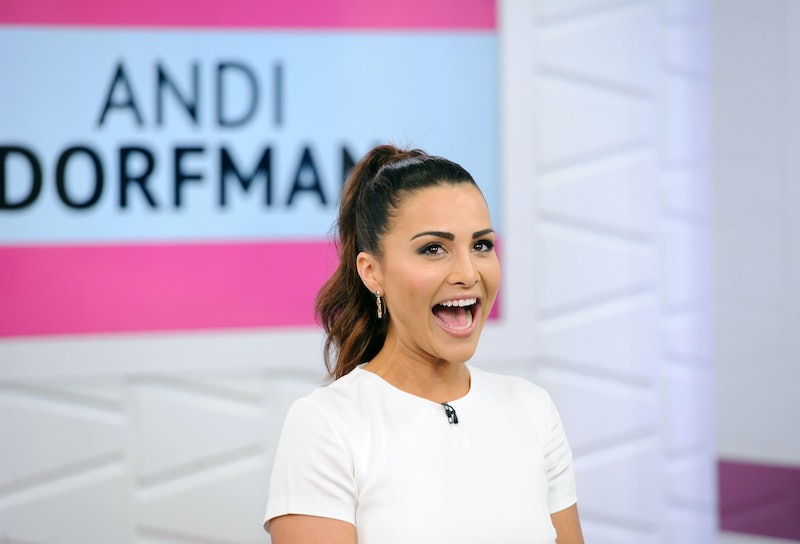 She may have been on the show over two years ago, but Andi Dorfman is still making headlines, especially since the former Bachelorette recently released a tell-all, It's Not Okay: Turning Heartbreak Into Happily Never After. But, what is Andi Dorfman's book about? She's written a part-confessional, part-memoir that details what it's like to be a part of a famous television romance as both a contestant and as the main event — and what it's like to think you'll fall in love only to experience heartbreak. The book jumps around in time, opening with the moment when Andi and Josh Murray broke up and goes back to explain her side of how she got there in the first place.

The book also explores Andi's experiences as a contestant on Juan Pablo's season of The Bachelor. She writes about how much she wanted to believe that they were in love because of the pomp and circumstance surrounding the show, but that her epic post-Fantasy Suite rant was based on all of the frustration she had suppressed for the past few weeks. It led to her first major fame boost when it aired on TV, but, according to Andi, it wasn't planned, and neither was her early exit.

Andi also writes about her season of The Bachelorette, where she gets into how hard it was for her to be the arbiter of whether or not these men deserved to be in a relationship with her. The section ends with her detailing what it was like to fall in deep, passionate love with Josh and to almost get there with Nick... until their Fantasy Suite nipped that love connection in the bud. She writes of that overnight date with Nick, "This is sex, dammit ... kiss me, love on me, and if you can’t talk without making an utter fool of yourself, then stay silent."

Nick, for his part, addressed the book in an interview with E! News.

Andi wasn't just interested in writing about the show. Over the course of several chapters, she writes about her side of what happened between her and Josh, from the proposal to the interview she granted to Chris Harrison where she tearfully confessed that her relationship was over. She gets deeply personal in the book about her side of their engagement and throws out some major accusations.

What people didn’t know was after two shows, I had become a 27-year-old woman who walked on eggshells in her own home. What they didn’t know is I was trapped with someone who, in my opinion, often behaved like an emotional abuser. Yes, I said it, and I’m not taking it back.

Josh claimed to the camera while on Bachelor in Paradise that allegedly none of the book is true, saying, "I can't comment on specific things in any kind of book that my ex has written, because it's a fictional story. There's stuff that's so ludicrous; how do you comment on stuff like that?"

But, Andi is seemingly standing behind her words, tweeting this after the book was brought up on Bachelor in Paradise.

Towards the end of the book, when Andi was at her lowest point after breaking up with Josh, she turned not to another relationship, but to her friends and family for support.

The real message of It's Not Okay is that when things are at their worst, you can't rely on a fantasy of what love means to feel better or to make things right, but your family and friends will always be there for you. It's pretty wise advice for a book aimed at Bachelor fans. And, it's pretty relevant to the Bachelor series too, considering that even though the show is about pushing people together into love, but often the most lasting connections seem to be the platonic friendships between the contestants.