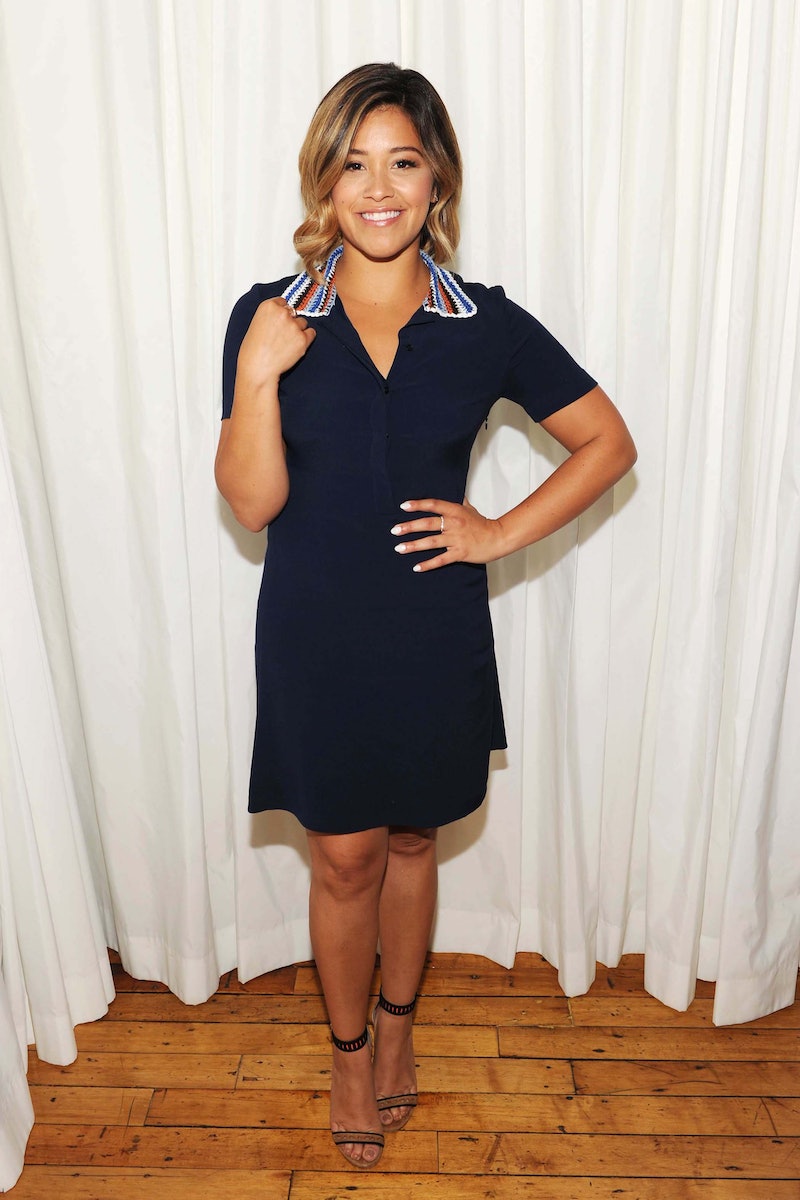 When Jane the Virgin star Gina Rodriguez's ascent to Hollywood superstar began after Season 1 of the series, the attention from magazines, blogs, and the media began to flood in — and, as they did, so did the hateful comments. A little over year ago, PEOPLE Espanol released a beautiful cover featuring the Rodriguez to honor the now 32-year-old actress' meteoric rise to success: She shared the cover on her Instagram page, along with a note thanking the magazine and her fans for having faith in her career. Though there were plenty of supportive comments , there were lots of negative bullying ones too, and Rodriguez noticed. It was so much, it prompted Rodriguez to publicly slam the negative comments, and take a stand against cyberbullying as a whole. "You just don't listen [to them]," Rodriguez tells Bustle, simply, of those who strive to take others down through hateful comments.

It's sadly a tale that's pretty much as old as time, though mediums have undoubtedly changed: A woman begins to make it big, her success is shared, the haters arrive in droves to tear her down with shots of faux keyboard streaming out of their fingertips as they typed. Sadly, it doesn't even just affect those in the public eye: Any woman who appears secure and dedicated to self-love is often the first to be torn down, whether it's through little comments about them "not needing to wear so much make-up," or the not-at-all welcome comment that men don't like it when women wear dark, red lipstick. This subtle tactic to take women's agency over their own appearance away by insinuating they're not dressing for themselves is a cruel one, but one that Rodriguez, who's dealt with it too often herself, will be the first to tell you isn't worth getting angry over. That, she says, is playing right into the haters' hands.

"How liberating is that moment? [Being able to say], 'I'm free of all the people who think I’m wearing make-up just for them,'" Rodriguez adds.

It's a liberating moment that is, unfortunately, still all too rare. Thankfully, in the past decade or so, there has been an uptick in the acknowledgement of just how messed up it is to frame women's appearances in terms of what men like, and others of the sort — but it's still not enough, not until the articles and the comments stop. Rodriguez, however, is doing her part: She's teamed up with Clinique for their new Difference Makers Initiative, which, as the actress told Bustle, is "about creating an awareness of one’s power, and really having women searching [for that] go on this beautiful journey of self love, self beauty, what beauty means to them, and how they can take that power and create change in their neighborhood, in their communities, in their family, in their household, in their small circles, whatever it may be... one small difference can help make a change."

Even focusing on one's beauty routine as an act of self love and empowerment could make a difference. Rodriguez explains that, for instance, "a beauty routine can be feminist, because it’s owning and it’s deciding that that’s something you want to do for yourself." After all, every women deserves to feel as if they're dressing up and putting on make-up for themselves, and no one should be able to take that right away from them. "The idea of being a feminist is equality, so I equally decide what I want for myself and my life and my body. A beauty routine being one, whatever that may be to each human being."

A difference could be anything, though — as long as it creates change in another human being, and potentially prompts them to create change in someone else. This is the beauty of making a difference, and Clinique's Difference Makers Initiative, says Rodriguez: Being the change you want to see in the world is really just key. "To create change in another human being is a domino effect. That person walks out the door and does it to someone else, and that person does it to another person, and now you’ve affected 10, 20, 100 plus people."

Of course, given her profession, Rodriguez still deals with the trolls and the haters looking to tear down her success, and she's still actively trying to combat bullying by participating in things like CustomInk‘s Annual "Be Good to Each Other" Bullying Prevention Campaign. The world is closer to changing than ever, but it's clear due to the existence of hateful comments, that there's still work to be done. However, Rodriguez has a clear, simple set response to give those who attempt to tell others about how they should look and what make-up they should or shouldn't be wearing: Tell them they're wrong. "'Nope, that’s not true! Yeah, you’re wrong! Sorry! But that’s OK,'" she says. "[It's] projecting the love that you have for yourself."

In other words: Move on with loving yourself for who you are, because no one else can do that but you.