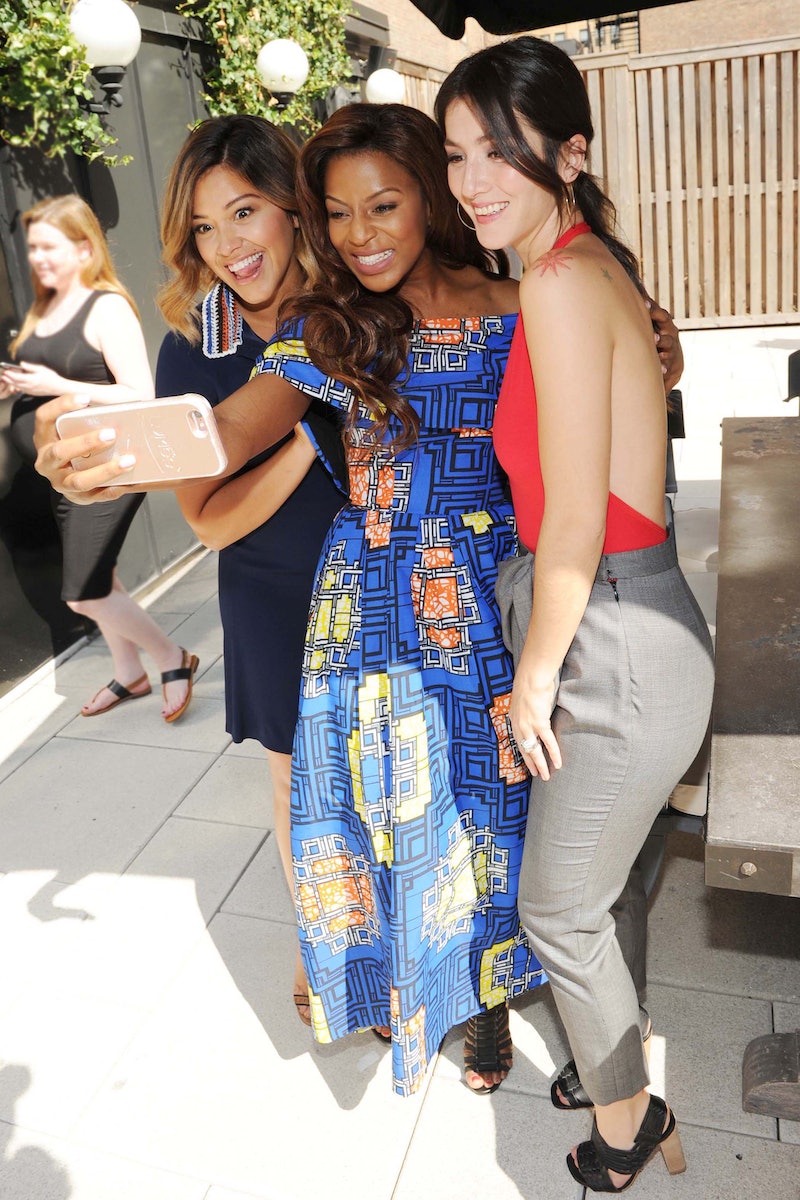 When it comes to figuring out how to make a difference in the world, Jane the Virgin star Gina Rodriguez, Sense 8 star Eréndira Ibarra, and South African actress Jessica Nkosi are three of the most knowledgable people around. As ambassadors for Clinique's new Difference Makers initiative, the trio is well-versed in how daunting it may feel when figuring out what can prompt change in the world — however, they're also well-versed in overcoming that daunting feeling and just going for it. "I would say if you’re going to go on your journey and figure out what you’re gonna do and how you’re gonna help other people, think about what breaks your heart," Rodriguez suggests while sitting down with Bustle, along with Ibarra and Nkosi. "Whatever breaks your heart, start following that, because what breaks your heart is the change you want to make in the world."

It's a solid piece of advice, and one that Rodriguez has actually taken to heart: After a barrage of hateful comments about her image were sent her way on social media platforms following a magazine cover release, the 32-year-old actress became active in the fight against cyberbullying, and in 2015 joined CustomInk’s 5th Annual Be Good to Each Other Campaign in support of National Bullying Prevention Month. In an interview with Latina, Rodriguez also revealed her personal experience with bullies when she was a teen, and how it drove her to want to make a difference. Now, as part of the Difference Makers initiative, Rodriguez is fighting to turn education into empowerment.

Ibarra, who is working with the Difference Makers initiative to promote love and unity over injustice, is also an activist by nature: In her Difference Makers video on Clinique's website, the philanthropist and actress details how she was born into a family of activists, and attended her first protest in Mexico City with her father when she was 12.

"It’s that one change," Ibarra tells Bustle of how a person can, little-by-little, transform the world — even if the change isn't actively going out and protesting. It could be, she says, as simple as practicing self-love. "That one difference that could be anything. It could be simply instead of looking at yourself in the mirror every morning and saying, I wish this was different, it’s looking at yourself and going, 'Hi. Today’s gonna be a good day. I can and I will.'”

South African actress Jessica Nkosi is working with the Difference Makers initiative to fight for different generations and, according to New Zealand's Times Live, is launching a foundation to supply children from disadvantaged areas with school uniforms.

"I think at the same time it’s also about taking your pain and your struggle, your experience, your past, whatever your struggles were going up, and changing somebody else’s life," Nkosi says. "My dad died from cancer, so I’m like let’s raise awareness, let’s make sure people know from a young age that... they [should] check it out. It’s raising awareness for whatever you suffered from, and using your pain for something greater."

But how can someone looking to begin making the change they want to see in the world start? Ibarra and Rodriguez stress it can be as simple as changing the way you see yourself. "It’s really bringing each other up and saying, you know what, it’s not about going out and changing the world, it’s about saying, 'maybe I don’t know enough — I want to take an active part of this world. So what do I do? I cultivate myself, I take care of myself, I love myself, and then I spread the radical self-love to everyone around me in the smallest details.'"

Rodriguez agrees. "You are very, very powerful, whether you have two followers or 20 million followers," she explains. "It’s about owning that, and it’s about seeing women that are deciding to own that, and encouraging you to do the same. Because if we can do it, you can do it 10 times better."

As for opportunities to give back, those are plentiful too, says Ibarra. "I think that, one, is start doing it yourself," Ibarra explains. "There are very small things that you can do to help your community, [such as] clothing drives, food drives, then there’s opportunities. Like, for example, I’m part of a foundation called Children International, an international foundation which works in 31 countries around the world where you literally sponsor a child, and that will give them medical and education support until they’re 18. Any kid that lives around where the center is will receive the same support even if they’re not in the system. And what they do is that they teach human rights so that kids become adults that will never be violated again, and I think that’s very powerful. Those are organizations that exist."

She adds, "I think it’s just knowing what you want to do, what you’re interested in helping in, and then making it happen."

Being the change you want to see in the world can transform everything: Considering how inspirational these three women are in their pursuits to do just that, that's not too difficult a sentiment to believe.