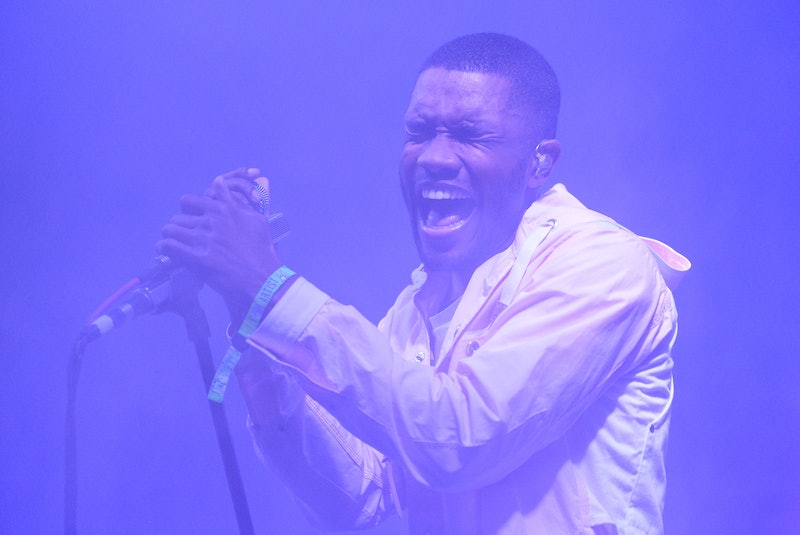 Have you put on your sleuthing outfit yet? You know, the one you wear to help figure out the overarching theme of all of Frank Ocean's songs? Sure, it might be dusty after four years of not being used, but with Ocean's release of his album Blonde, it is more than needed. It is required, especially because of the album's intricateness and clear detail in each note and lyric. But let's narrow the focus for comprehension's sake, shall we? For this installment, let's focus just one one particularly good song, "Pink + White." But just what is Ocean's "Pink+White" about? Because it's quite heavy, and needs to be discussed.

How to start off such an analysis? Well, by looking at the source material, of course. The singer provides listeners with endless clues in his lyrics, some of which are even sung by the Queen herself, her majesty, Beyonce. Sure, she's only heard for a blink-and-miss-it moment, it but her presence makes quite the mark, regardless. She's Bey, after all. The thing is, you don't include Bey on a song that doesn't mean something. So, let's take that little factoid into consideration when taking a closer look at what the song is trying to say. As per Genius, the first verse goes:

That's the way everyday goesEvery time we have no controlIf the sky is pink and whiteIf the ground is black and yellowIt's the same way you showed meNod my head, don't close my eyesHalf way on a slow moveIt's the same way you showed meIf you could fly then you'd feel southUp north's getting cold soonThe way it is, we're on landSo I'm someone to hold trueKeep you cool in this good lifeWon't let you down when it's all ruined

Admittedly, that in and of itself doesn't give too much away in its abstractness. But, what I do get from it is that Ocean is speaking directly to someone, someone he is or was likely romantically involved with, judging by the intimate feel these lyrics give off. The hook certainly gives more info on the way that romantic relationship is or was directed.

Just the same way you showed me, showed meYou showed me loveGlory from aboveGood Glory, dearIt's all downhill from here

The assertion that things go awry after the "glory" shows that while it may have been good between the two at some point, and the "glory" implies it was definitely really good, it clearly isn't anymore. It speaks to two people reaching a peak and subsequently falling short thereafter, every single time. Or, in terms of drugs, the inability to recreate the feel of that first time thrill under its influence. Which, as an interpretation on the Genius site points out, is exactly what the imagery is pointing at here.

The track details Frank’s memory of a past lover and what Frank has learned from them. These lyrics detail an experience with drugs Frank had in the past with a former partner, the drug of choice being cocaine (pink + white = vagina and cocaine). The sky and ground are perceived differently from usual, nodding his head and keeping his eyes open to this drug-induced difference is important to Frank’s partner. The following lines about flying, letting down his partner, and everything being downhill from here refer to Frank’s impending experience with this person after the high wears off.

I mean, it does make sense. The song in and of itself is a bit confusing with all of its imagery, but when you become aware of the references he's making, it becomes clearer. This tune feels almost like a stream of nostalgic consciousness, one that seems hazy due to the aforementioned drugs. It's a sentiment that can really be seen in the following verse, more so than the rest of the song, considering the singer recalls certain memories and all of the things this person "showed" him in short, flashing spurts:

In the wake of a hurricaneDark skin of a summer shadeNose dive in the flood linesTall tower, milk crateIt's the same way you showed meCannon ball off the porch sideOlder kids trying off the roofJust the same way you showed me (you showed)If you could die and come back to lifeUp for air from the swimming poolYou kneel down to the dry landKiss the Earth that birthed youGave you tools just to stay aliveAnd make it up when the sun is ruined

To make things a bit more concise and less metaphorical, this is a bittersweet song that feels as melancholy as it does weirdly accepting. It doesn't feel like a lament over lost love, but rather, as the Genius description insinuates, a song of remembrance of a fleeting time when perhaps the love wasn't long lasting, but affecting (like the drugs). If nothing else, the love gave the singer a chance at self-reflection.

The outro really rounds it out,

What a life, remember how it was, climb trees, Michael Jackson, all in shit(We've come) Say what up to Magic, just shootSay what up to daddySay what up to life, I found itAnd I know what you might want to knowRun from me and your teamStill ain't grabbin six (take it easy)Give me somethin sweetBitch I might bite, ain't no tellinThis is life, life immortality

"Pink + White" is no doubt a love song, but maybe one that's more about loving oneself than someone else.