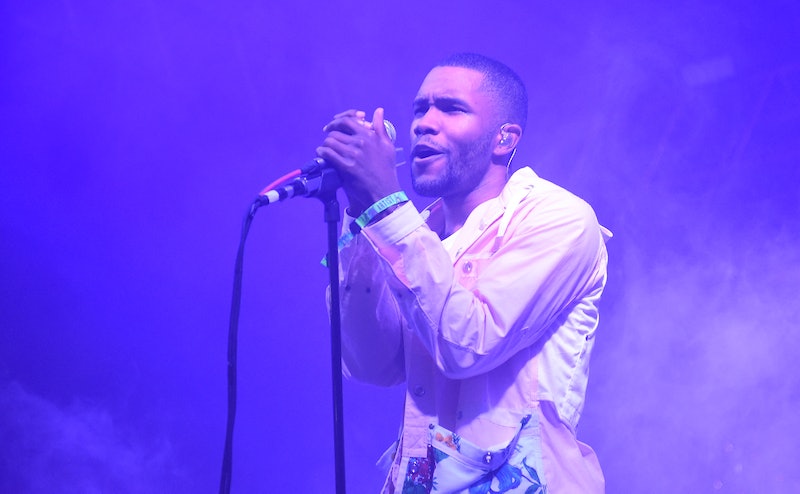 After four years of speculation and false starts, Frank Ocean released two albums in two days: the visual album Endless and, a day later, Blonde. As Endless is experimental and more of a preview of the full album, it's easier to listen to and rank the tracks on Frank Ocean's Blonde, a more traditional record – although "easy" might not be the best way to describe ranking one of Ocean's new songs over another. After a few listens to the album, it's clear that it's a beautiful and challenging work of art, filled with altered otherworldly vocals, introspective reveals, and gorgeous production, along with a few slightly bizarre spoken word portions.

As I was attempting the difficult feat of ranking the tracks on Blonde, a lot of factors came into consideration. Lyrics are an incredibly important part of Ocean's music, so I had to keep the Genius tab open. The album is also full of excellent, unexpected production, with many switches and distinctive portions of each song. The most important thing I paid attention to was how powerful the emotion in each song is, which is often the effect of the combination of lyrics and production. It's an impossible task to objectively, or even subjectively, rank the songs on this album, but here is my personal ranking.

The story from DJ SebastiAn tells a tale of love in the digital age, but it seems a little simplistic to say that virtual connection is fake. For the record, I do love the background piano that accompanies these portions of the album.

The short song seems like a bit of an afterthought, though the emotion and lyrics are evocative. The snippet of dialogue at the end seems a little pointless.

While I enjoy the cathartic children's chorus at the end, the song is a little chaotic and hard to grab onto.

"Be Yourself" is my favorite of the spoken word/interview segments on the album, as it features a hilarious message from Frank's mother about the dangers of smoking marijuana. While it seems to poke fun at her, its inclusion and title also suggests that Ocean appreciates the message that he shouldn't try to be anyone else.

"Close To You" is gorgeous, and I love the beat, but it's a little short and simple to be all that memorable.

The beginning of "Ivy" disappointingly sounds like we're about to get a 2000s indie rock song about young love, but luckily Ocean's voice in the verses is able to set the song apart.

"Skyline To" is less of a song than a texture, creating a beautiful swirling atmosphere that escalates into a shiver-inducing instrumental moment. It does feel like a bit of a waste of a Kendrick Lamar feature, though.

The lyrics for "Solo" are beautiful, discussing the isolation of a partying lifestyle, though I find the song to be notably simple and slow-paced in comparison to the rest of the album.

The rare Andre 3000 guest appearance gets its own track, and for good reason.

I like the album version of Nikes better than the one released in the video, and it serves as the perfect way to ease into Blonde. Pitched up lyrics like "RIP Trayvon/That n**** look just like me" establish that this is an album that will explore serious topics in new ways.

The gospel-influenced penultimate track is quiet and moving and resigned to parting ways with a lover before it completely shifts gears and proclaims, "I'll always love you."

One of the most meditative songs on the album is an introspective look into Frank's bravery. While not a catchy song, "Siegfried" feels like Ocean at his most emotionally vulnerable, ending with a chorus asserting that he'd "do anything for you (in the dark)."

The final song serves as a thank you note for his career with the words, "Play these songs, it's therapy momma, they paying me momma/I should be paying them/I should be paying y'all honest to God," and it escalates gorgeously from there. The final interview segment, while chaotic, evokes home movies and passing time, appropriate to the feeling of sadness and joy once the album is over.

The production of this song is insane, and it's a little more cheerful than most of the album. It's just beautiful.

One of the sexiest songs on the album, "Self Control" is about a summer fling that, of course, becomes sad and conflicted with a cathartic layered outro in which Frank lets his fling know that he "knows you gotta leave."

The beat of the song and the melody make "Pink + White" one of the songs on the album most likely to get stuck in your head. In addition to being incredibly catchy, the sunny guitar and wistful lyrics create a heavy feeling of nostalgia which is evoked again and again while listening to the album.

"White Ferrari" is a massive emotional song that is simultaneously sparse and subdued. Adding the Beatles reference and gorgeous outro, it's instantly iconic.

These are, of course, my own personal thoughts and rankings of the songs on Blonde. My favorite songs have changed as I've continued to listen to the album, and I'm sure it will change again. I recommend listening two or three times, at least, before passing judgment; it grows on you, and proves it's worth the wait.