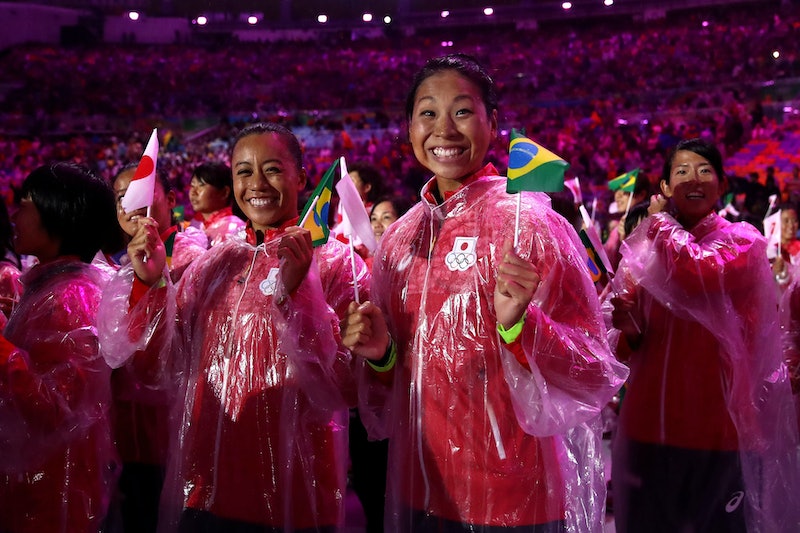 Rain decided to make a surprise appearance at the Olympic closing ceremonies, but the Olympians were not about to let a little shower stop them from celebrating in Rio. Instead, they did the only thing they could do: the Olympians donned ponchos and started taking selfies. The greatest moment of their lives deserves to be commemorated even during a downfall.

As you would expect, Olympians wearing rain ponchos is as delightful as it sounds. Now that the games are over, the pressure to bring home medals gave way to pure excitement of having just been part of one of the best Olympics in recent history. Rio proved to be a fantastic host country, and the athletes from around the world gave the games every ounce of talent and energy they had. When it came time to dance and hang out with their fellow Olympians at the closing ceremony they went for it.

Thankfully, some of them paused long enough to strike a pose sporting their ponchos and biggest grins. These pictures of happy, drenched Olympians are the actual best mood boosters ever. Check them all out below and just try not to smile while you look at these amazing athletes capturing memories of their rainy last night in Rio.

Team USA In Their Clear Ponchos

These gold medal winners gathered together for the best, most talented selfie ever snapped.

Team Australia Teammates Taking It All In

Australian Track and Field Teammates Joel Baden, Peter Bol, and Dane Bird-Smith could not look any happier than they do in this selfie.

Australian water polo player Ford crammed in not just his friends, but athletes from around the world in his poncho-fest selfie.

Not only is the New Zealand runner weathering the rain like a champ, her caption game is on point too.

OK, so it's not technically a selfie, but are you going to deny Australia's Shkara when he is literally dancing in the rain?

Abood is not only sporting a poncho, he also managed to get the broccoli dancers in his selfie.

Railey is on the Team USA sailing team, so it's no wonder the rain didn't phase her.

Railey Snaps A Photo Of Her Teammates

Railey's selfie game is on fire. She also got a picture of herself and her teammates rocking ponchos and watching the closing ceremony in the stands.

Swimmers and siblings, David and Emma McKeon posed for a quick selfie in the rain.

Richard Murray gathered some of his teammates for this adorable pic.

Team Canada Doing It Their Own Way

Tyler Mislawchuk and (most) of his pals traded in ponchos for their cool windbreakers.

The moral of this story: clearly ponchos plus Olympians equals cuteness overload.