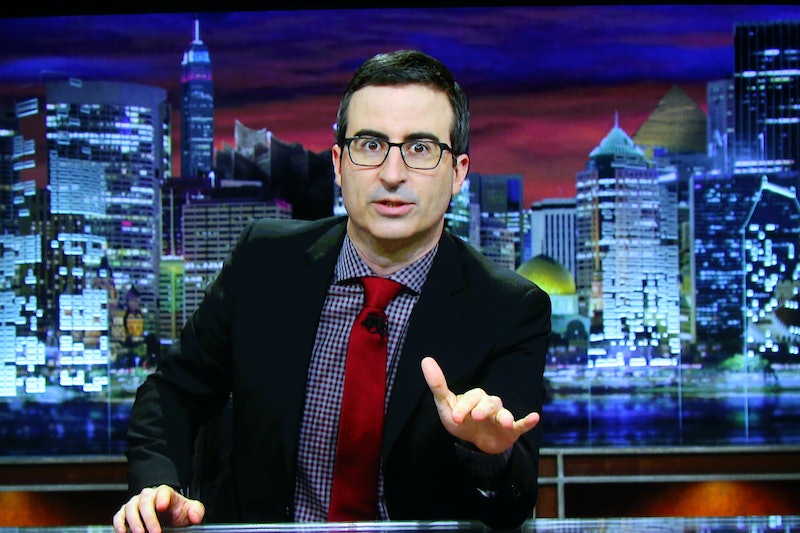 On the evening of Sunday, Aug. 21, John Oliver opened his segment on Donald Trump with an apology — not to the presidential nominee, but to his own viewers: "Let me just say how truly sorry I am to have to talk about him again," the comedian said. But talk about him again he did, and it was good. Not only did he provide a critique of the Republican nominee: Oliver urged Trump to drop out of the race, and he made a pretty good case for himself by comparing the presidential nominee to an unlikely fictional character.

Pointing to Trump's disastrous last week, which included a dip in the polls; an insulting attempt to appeal to black voters; the resignation of campaign manager Paul Manafort; and the appointment of Breitbart News chairman Stephen K. Bannon as the Trump campaign's new chief executive. And those are just the things Trump's already been criticized for.

Oliver didn't just use his segment to bash Trump — he also acknowledged The Donald's successes (relative successes, but still): his exposure of our country's flawed campaign finance system, his reveal of just how far party elites will go to support their candidate, and his successful manipulation of the media. Nonetheless, Oliver urged Trump to drop out.

"This feels like a fork in the road for Trump," Oliver declared. "He's either hitting bottom, from which he'll rebound to victory, or it's the beginning of the end." According to Oliver, both scenarios would be disastrous for the Republican candidate: he can't lose, because his entire brand is built on winning; but he can't win, which Oliver claims "is even worse for him, because then he actually has to run the country."

For Trump, who is undoubtedly accustomed to a lavish lifestyle, serving as Commander in Chief would be a serious quality-of-life (and salary) downgrade. As Oliver pointed out, when Trump apologized for his past missteps and went to Louisiana to distribute disaster relief, which is "pretty much all that being president is," he looked "miserable."

Judson, perhaps the country's youngest (fictional) presidential candidate of all time, "realizes he can basically propose anything and a certain segment of the population will buy into it." Sound familiar?

In the end, Moon becomes president — not only is he far too young to hold office, he's also woefully unprepared and a little confused as to how he got there. Oliver kindly provides the fictional kid president's resignation speech as a rubric for Trump:

I have a question for the grown-ups of America ... Are you out of your minds?

...You want me as Commander In Chief of the Armed Forces? What if somebody attacked the United States? Would you really want me in charge?

America must be in really bad shape if you elected me president. You better get it together and find some qualified people to run this country, or we'll all be in big trouble.

Grown-ups of America: Oliver is telling you that we need to get it together and elect some qualified people to run this country.

More like this
'The Undeclared War' Took Inspiration From This Gavin & Stacey Location
By Maxine Harrison
Police Shove 'Full House' Star Jodie Sweetin At An Abortion Rights Protest
By Radhika Menon
5 Ways To Stand In Solidarity With Women In America From The UK
By Sophie McEvoy
How To Fight For Reproductive Rights, Based On How Much Time You Have
By Courtney Young
Get Even More From Bustle — Sign Up For The Newsletter