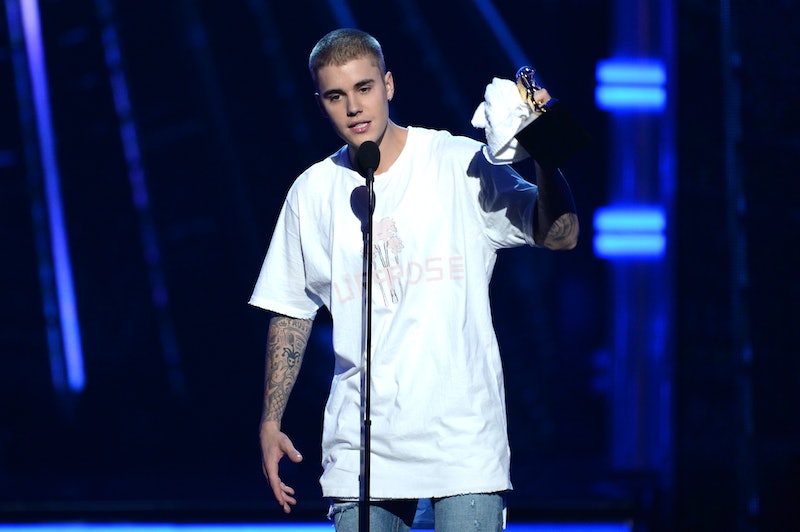 In addition to churning out banger after banger this summer (I literally wouldn't be able to stop listening to "Let Me Love You" and "Cold Water" if my life depended on it), Justin Bieber seems to be playing the field when it comes to warm-weather romantic relationships. In all seriousness, his rumored dating life has been full of drama recently. The Biebs' rumored relationship with Sofia Richie was so contentious for fans that he wound up deleting his Instagram because of it. (Bustle has reached out to reps for Bieber and Richie regarding the dating rumors, but has yet to receive a response.) And now it appears that Bieber may be dating model Bronte Blampied, with whom he spent several nights out in England.

Since most UK tabloids have been primarily focusing on Blampied's "risque top" and near-wardrobe malfunction while stepping out of a car with the Biebs (seriously???), let's dig a little deeper into the model's life — you know, past the grossly sexist headlines and at least onto her Instagram. Who exactly is Bronte Blampied? And what exactly is going on with her and Bieber?

For one, the reason that she's been in the news recently is because she and Bieber have been papped going out on the town together. The two hit up Tape nightclub in London on Friday night/Saturday morning, as well as on Sunday night/Monday morning. In between their Tape appearances the two also partied at the V Festival, where Bieber also performed.

However, it should be noted that Blampied is friends with Sofia Richie, at least according to The Sun. This is interesting, obviously, because Bieber and Richie (who is 17) were photographed holding hands and cuddling in Japan just a few weeks ago. HollywoodLife also points out that Blampied is friends with Sahara Ray, who Bieber was also recently rumored to be dating. I mean, maybe nothing's exclusive or maybe they're all just friends and none of them are actually dating. Either way, Blampied and Bieber are friends — they even went on vacation together in Hawaii recently:

It seems that Blampied was in a serious relationship not that long ago, at least according to her Instagram. While she still has pictures with a boyfriend on her Insta, the last one was posted 21 weeks ago — which is roughly five months ago. So while the two seemed sweet and loving at the time, five months is practically half a year, and a lot could change in that time.

Another thing you'll notice by peeping the model's 'gram is the fact that she travels, a lot. And all of her vacation photos are absolutely stunning:

Above all else, though, Blampied's Insta feed is rife with delicious food photos. So in addition to her envy-inducing modeling shots and gorgeous captures of exotic locales, there are photos like this:

And really, who needs Justin Bieber when you have a bowl full of banana and mango ice cream waiting for you at home?