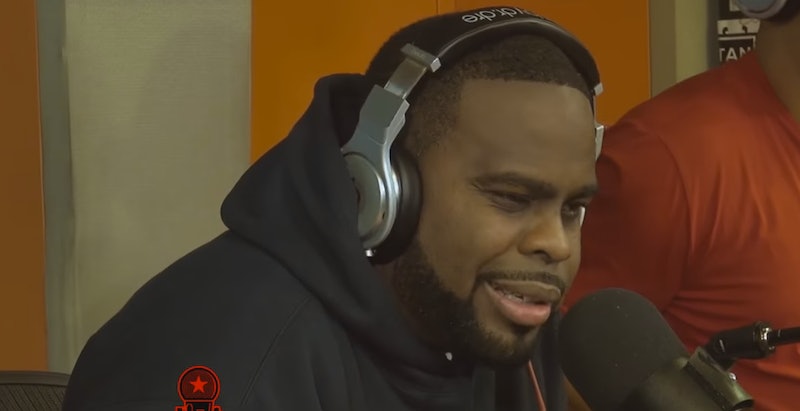 The idea of giving unknown rappers One Shot to succeed in a traveling TV competition of the same name, judged by some of hop hop's biggest stars, is a great one. And the mastermind behind the idea isn't someone working behind the scenes at BET — it's actually rapper KXNG Crooked's brainchild. And unless you're a serious student of hip hop, you might be wondering who KXNG Crooked is, and the new series will tell you exactly that, as well as what he cares about.

One reason to be excited for One Shot's Aug. 23 premiere is that there aren't many opportunities for aspiring rappers to win a record deal and $100,000 through a competition — and possibly become successful artists even if they don't win by getting the increased spotlight of a TV episode. And by bringing rap to competition reality TV, KXG Crooked's attempting to change the way new artists are discovered. There are always ways to pay your own fame forward, and that's what Crooked will be doing with this new series. And since he's going to be one of the main judges on the show, alongside host Sway, radio host and DJ King Tech, and Mike Smith, it serves you to get to know KXNG Crooked, from him name to his music.

He Has Multiple Aliases

Obviously, KXNG Crooked is working under a stage name, like many rappers do, but he has multiple ones. In addition to KXNG, he's also known as Crooked I or Crooked Intriago.

In hip hop, your city and state of origin can mean everything. For Crooked, he's spent his career in Long Beach, California as a member of group Slaughterhouse. As you can see from the above meme, though, the group hasn't released much music recently, and their next collaboration is long awaited (though Frank Ocean did finally come out with Blonde, so maybe their fans should have hope).

He Wants To Make Music With A Message

But those patient fans should be excited to hear that Slaughterhouse is currently working on a new album, Good V. Evil, according to a statement Crooked released to Hip Hop DX, and it's going to tackle more serious issues. "I think we need to have ... some more political conversations, some more conversations about police, the relationship between the community and the police ... So this album is for the grown up people and I think it’s going to shake a few things up because it’s raw and edgy," he told Hip Hop DX. And according to this post by Anno Domini Beats, the album may feature some well-known rappers, like Eminem.

He Was Motivated To Give Back

While explaining how he came up with the idea for One Shot, he was really inspired by the idea of giving back to younger generations. Always on the lookout for new rappers to feature, he wanted the opportunity to give an unknown the same chance to succeed that he received years ago.

One of the reasons Crooked may have had the idea to create One Shot is because he owns his own label, Dynasty Entertainment. Being behind the scenes and looking for his own talent may have helped spark this TV show idea.

He's Got Some Amazing Connections

On the series, KXNG Crooked is taking advantage of his years in the business by calling some favors in and having very successful producers, rappers, and other hip hop luminaries on the series as guest judges to join the regular panel. This, along with all of his other career history, makes KXNG Crooked the perfect person to usher this idea to the small screen. One Shot was his idea, and he should be the person to make it work.