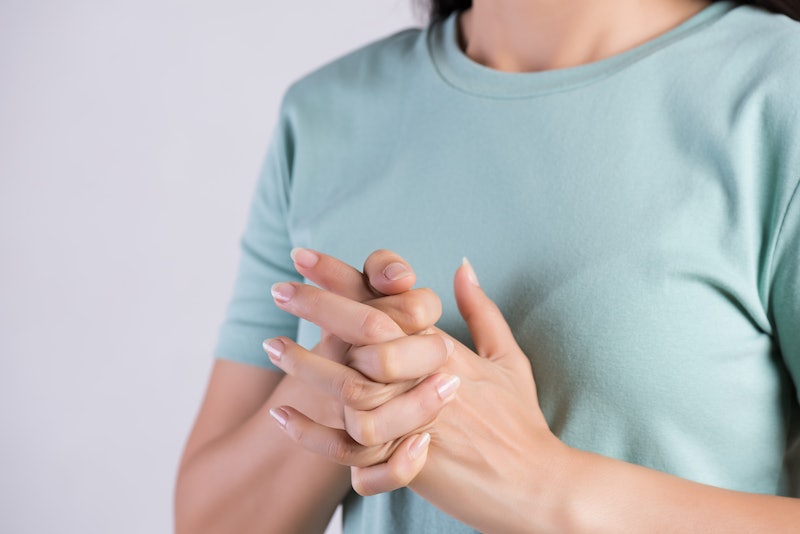 If you, like yours truly, is a notorious knuckle-cracker, I have some really excellent news for you. According to recent research, it appears that cracking your knuckles may not be bad for you after all. In fact, it may actually be good for you. So why the heck have we been passing around the same old piece of advice that says it's terrible for you for so long? As it turns out, there might be more to this habit than meets the eye.

The current study looked at the knuckle-cracking habits of 40 participants. According to the Independent, researchers "used a combination of ultrasounds and grip strength tests to measure the effects the habit had on participants' bones and flexibility." Initial study findings suggest that there are no harmful effects of knuckle-cracking. What's even better? Participants allegedly experienced a better range of mobility after cracking their knuckles. That's a benefit if I've ever heard one.

Now, growing up, I cracked my knuckles all the time. I can't speak for how it feels for other people, but for me, it relieves a lot of tension in my hands. I've found it helps especially now, as an adult, if I'm spending a lot of time typing on the computer, writing things out by hand, drawing, or doing another hand-heavy activity. For me, the relief is comparable to that glorious feeling of finally cracking your back during yoga or getting some alignment worked out with your chiropractor.

Of course, everyone from my mother to my teachers told me cracking my knuckles was a terrible habit and would lead to health issues down the road — but why? Is there any science to back up this idea, or is it an old wive's tale pervasive enough to seep into our collective conscious? Let's take a closer look.

Why We Thought Knuckle-Cracking Was Bad

For a long time, researchers and medical professionals (and my mother) believed that cracking your knuckles led to arthritis. Specifically, people believed that the "popping" sound was due to popping a "bubble" as parts of your fingers (or toes, or what have you) were separating. Yikes.

But Is It Really Bad?

However, there doesn't actually appear to be any research backing up the arthritis myth. Indeed, recent research has shown that the "popping" sound is actually due to fluid rushing into the cavity after the separation. As far as we know now, this has no negative impact. Furthermore, as Dr. Pedro Beredjiklian, chief of hand and wrist surgery at Philadelphia’s Rothman Institute, explains at TIME, "The more you crack your joint, the more you stretch and loosen both its capsule and the surrounding ligaments. And the looser those components become, the more easily your joint will pop." This is why it can feel so comfortable to crack your joints, if you it on a regular basis.

What's more, the current study isn't the only one to support the idea that knuckle-cracking might actually have some benefits. In a separate but related study led by Dr. Robert Boutin and presented at the Radiological Society of North America (RSNA), researchers found that cracking your knuckles is likely harmless. This study had a different starting point in that scientists were trying to discover where the "popping" sound of your knuckles cracking comes from — and although that particular data point is still a work in progress, the researchers were able to conclude that cracking your knuckles has no adverse side effects. Unlike the more recent study, however, these researchers did not report that knuckle crackers had any positive effects, either.

To Crack Or Not To Crack?

As of right now, it appears that there are no negative side effects of cracking your knuckles. Whether or not you personally enjoy it, though, is probably the biggest factor: If the sound grosses you out, or you simply feel like you're going to accidentally break a finger, it's fine to avoid doing it. But there is no current scientific research that suggests cracking your knuckles will lead to arthritis or any other health problems. So knuckle-crackers, unite! It looks like we've won this battle — for now.