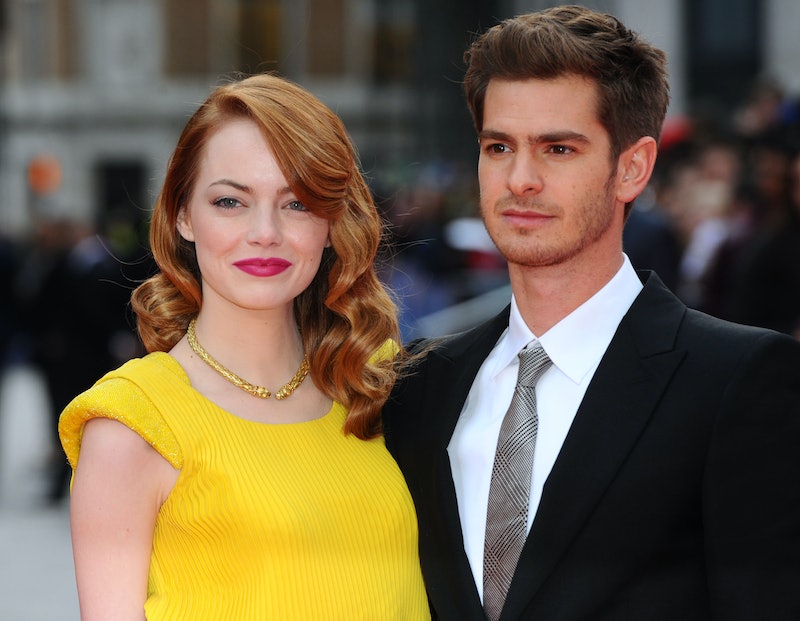 It was a gray and stormy day in October 2015 — OK, so maybe that wasn't the weather exactly, but it sure felt like it when it was announced that beloved celebrity couple Emma Stone and Andrew Garfield broke up after four years together. That's like a lifetime in Hollywood. The duo, who became known as "Stonefield" to their biggest shippers, truly broke hearts everywhere. Fans have since had plenty of time to deal with the sadness and come to terms with the heartbreak, but this latest news might make them feel a whole lot better — or not. On Sunday, Stone and Garfield were spotted together in London. Based on photos shared by the Daily Mail, The Amazing Spider-Man co-stars were smiling, laughing, and appeared to be having a great time. As you can imagine, these pictures are causing quite a stir and Stonefield shippers are losing it on social media. There are even some Stone and Garfield supporters channeling a Backstreet Boys favorite.

To be clear, details are scarce regarding this outing. There's a good chance the actors are just good friends, who wanted to catch up. Or, you know, since only sources came forward saying Garfield and Stone were dunzo, maybe, just maybe, they truly are a couple taking a stroll down a lovely street in London. If that's the case, then the joke's on everyone who's been mourning their break up.

Whatever the truth is behind these photos, Stonefield shippers are trying to come to terms with it all and they're being pretty passionate about it. Yes, some are screaming for joy and possibly even hyperventilating about it, while there are others who are demanding the truth, stat. Are they together or aren't they? Basically, these shippers are looking to BSB to help express themselves. They just want Stone and Garfield to stop playing games with their hearts.

It's understandable that their biggest shippers want a straightforward answer about their relationship status, especially if these photos mean absolutely nothing. They don't like being teased and need to know how to move forward appropriately. It doesn't seem likely that either Garfield or Stone will comment on their London outing, so fans just better figure out a way to handle it in a healthy manner. Maybe the following gif will ease their pain a bit?

If BSB can't help Stonefield supporters through this emotional time, then I don't know what will.